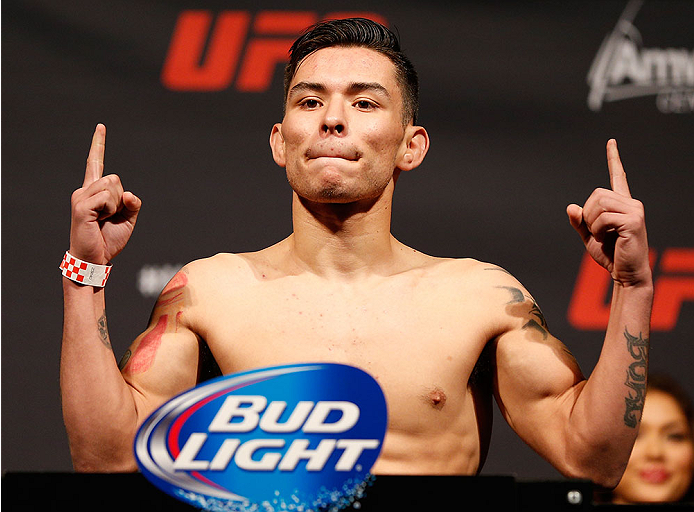 Ray Borg started this whole Twinkie obsession thing, so it’s only fair to check in with the flyweight prospect before each fight to make sure the New Mexico native hasn’t let things get out of control.

“For a while, it was looking like lightweight a little bit,” he laughs. “I’ve had to ration my portions on the Twinkies, so I’m good.”

At least the training camp for his Saturday bout against Chris Kelades wasn’t as bad as the time when Hostess stopped making the golden snack cake for a spell and he was relegated to trying to make his own.

“It’s never the same,” he said. “I’ve had people tell me they found recipes online and we tried to make them but they pretty much tasted like cornbread with whipped cream on it.”

What does any of this have to do with fighting? Nothing. But that’s the beauty of being a 21-year-old on top of the world. You can talk Twinkies in one sentence and fighting in the next, and it all makes sense. So on to Borg’s day job, one that has him regarded as one of the top young talents in the sport.

Two fights into his UFC career, the “Tazmexican Devil” is 1-1, with the second “1” holding an asterisk, considering he took his April 2014 debut fight against top 15-ranked Dustin Ortiz on short notice and then lost a controversial split decision. He wasn’t happy with the defeat, but just like light heavyweight champion Jon Jones’ loss to Matt Hamill freed him to fight and not have to protect his unbeaten record, Borg takes the setback in a similar fashion.

“It does take the pressure off,” he admits. “It’s always great to stay undefeated, that’s everybody’s dream, but unfortunately that’s not a reality. Would I have liked to get that win? Yeah, of course. Dustin has fought top opponents and he’s a contender, and I felt like I beat him, but it does take a lot of the pressure off because now that you’ve experienced a loss, you know what it’s like, and you know how to deal with it. You don’t have to worry about having a clean record; you just go in there and fight.”

Two months after the Ortiz fight, Borg showed no ill effects from the first loss of his pro career, as he needed just over two minutes to submit Shane Howell.

“It felt very, very different and what made it feel that way is the fact that I was comfortable,” he said. “I realized that getting the UFC jitters is a pretty normal thing to have for a lot of people and since my debut came so fast, I knew how good I was, I just wasn’t sure if I was ready for that level of competition. But there’s only one way to find out, and I found out that I was ready for that competition level, so I was way more comfortable the second time and I felt like I belonged there.”

He does belong, yet the scariest part of Borg’s efforts thus far is that he doesn’t think we’ve seen a fraction of what he can do yet.

“We obviously had a different game plan,” he said. “We felt like I’d be able to outbox him and outwrestle him, and I got in there and I realized that I just wanted to hurry up and get this one out of the way. (Laughs) I want to get this win, collect my check and go home, so the game plan went out the window, and hey, it paid off.”

That’s a good problem to have though, right?

“That’s the reason why most of my fights have ended in submission,” Borg said. “Every fight I go in there planning to showcase my striking. But honestly, I’m not picky. I will take a win whatever way I can get it, whether it’s a quick knockout or submission, or if I have to go to a decision.”

Borg makes it clear that he doesn’t like decisions, and he’s not expecting one this weekend, but Canada’s Kelades is no easy out, and the Albuquerque product knows it.

“He seems strong and he’s a good grappler, but most of all, I feel like he’s real durable,” Borg said of his opponent. “But he’s not going to throw anything at me that I haven’t seen before. I know how to deal with the durability of a fighter and also the strength of a fighter. Me and my coach have talked about it, and it’s time to show the world how much of a complete mixed martial artist I am. My striking is very, very underrated, I haven’t shown any of it at all, and I feel like it’s a good time to show it.”

It’s a mature approach from a 21-year-old Twinkie loving kid, but maturity is nothing new for Ray Borg.

“I get a lot of people telling me that, that I’m very wise for my age,” he said. “I’ve been through a lot in my young life and I’ve had to grow up faster than a lot of kids had to, and I get that quite often.

“I started training MMA when I was 14,” Borg continues, “but it wasn’t like the typical 14-year-old who goes in and wants to try out fighting. I tried it out and realized that this is what I’m going to do for a living and what I’m going to try and succeed in life with. This was one of my dreams, I set out for that dream, and so far it’s going great.”