It’s fair to say Paige VanZant has what Bec Rawlings wants: a top ten ranking and a bigger fan base.

“Rowdy” is hoping to gain both with a win against VanZant this Saturday on the main card of UFC on FOX: Maia vs Condit.

“I’m always fired up for my fights,” she said. “I love to fight and go out there and make money. But obviously this is a fight I’ve been asking for for a long time, I feel like it’s kind of lit a little fire in my belly. I’m looking forward to going out there and stealing her ranking and stealing some of her fans.”

The native of Tasmania believes she will be playing the villain against the No. 10-ranked “12 Gauge.” VanZant, runner up on Dancing With The Stars, has a squeaky clean public image in contrast to Rawlings. Rawlings is not afraid to speak her mind, even if it means drawing the ire of fans on social media, and she has courted her share of controversy.

“I feel like I’m always the villain no matter who I fight, more so now that I’m fighting Paige. She’s kind of in the position of the UFC’s poster girl and America’s sweetheart so I definitely feel like the villain role suits me just as much for this fight.”
RELATED CONTENT: Matchup - VanZant vs Rawlings | Rawlings fighter bio | Vancouver open workout highlights

But Rawlings, whose last fight was a unanimous decision victory over Seohee Ham in March, is under no illusions about her opponent’s toughness. VanZant is no pampered star afraid of being hit. The 22-year-old demonstrated her grit in a bloody, lopsided loss to Rose Namajunas which saw her finished in the fifth round with a rear naked choke.

While VanZant has proven her ability to take punishment, Rawlings questions whether that’s a good thing ahead of their fight at Rogers Arena in Vancouver, BC, Canada. 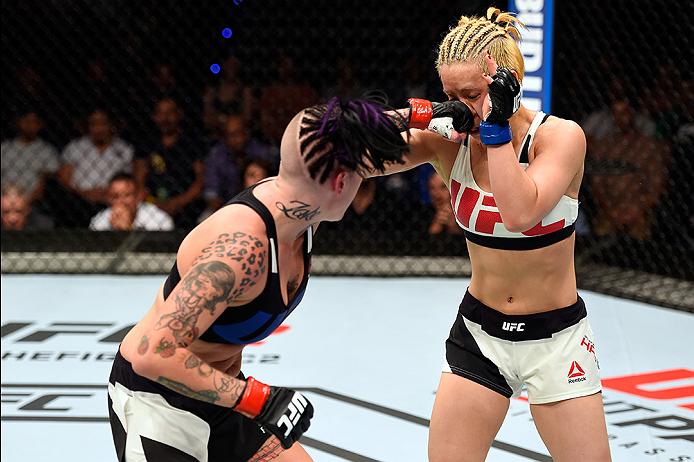 “I feel like she’s very green still, she’s very new to the sport,” Rawlings said. “She’s quite athletic, she’s got an extensive dancing and cheerleading background, and that definitely crosses over into fighting, just her athleticism alone. As a fighter, she’s toughm she’s proved that she can take a beating, but if someone was to explain what my biggest attribute is I’d be almost offended if it was, ‘Oh, she can take a beating’. I feel like that’s what Paige is known for. I want to be known as the girl who gives the beatings, not the girl who can take one.”

Improving her cardio has been the biggest theme of Rawling’s training camp at Alliance MMA in San Diego this time around. The 27-year-old appeared to struggle with endurance in her fight against Ham, and she attributes that to a hip injury. So this time around, Rawlings is out to prove that her gas tank is one of her strengths.

“What I’ve focused on a lot in this training camp is my cardio. Paige is known for her very high pace and her good cardio, which I’m normally known for as well. My last fight didn’t show how good I can be in the cardio department just because I was coming off a bad injury and having a really bad camp,” she said. “But I feel like my body’s back to 100% and I’ve been able to push my body to the extreme like I’m used to being able to, so cardio’s definitely going to play a big factor in this fight. I feel like I can push the pace and maybe even tire her out.”

A mother of two, Rawlings believes a title shot is in her near future should she score a win over VanZant. And Rawlings likes her chances against the division’s undefeated champion, Joanna Jędrzejczyk. 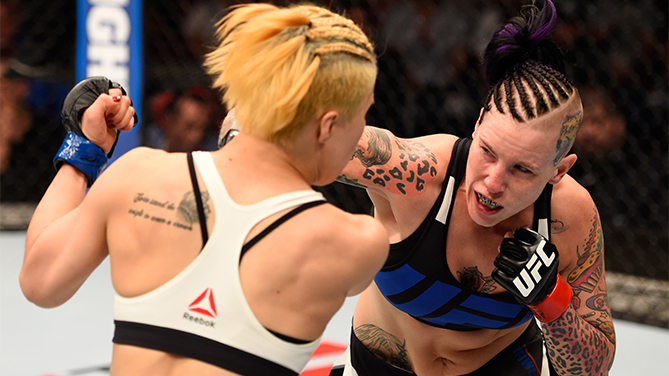 “For sure (I will get a title shot soon if I win),” she said. “The division isn’t that stacked, and if Joanna keeps knocking people out and taking them out, there’s gonna be no girls left. I definitely feel like if there’s anyone in the division that can stand with Joanna I think it’s me. It has to be someone who’s nasty and mean and willing to bring her the fight instead of being so timid and scared of her strikes. So I definitely feel like a title shot is in the near future for me. If I keep taking people out, then they’ll have no choice but to give me a shot.”

First, Rawlings has to win on Saturday, and she’s looking to do it in spectacular fashion. While finishes are rare in the women’s strawweight division, it’s Rawlings’ ambition to end VanZant’s night early.

“I always expect a war. (In the strawweight division) It’s hard for us girls to finish fights, as we’re all very durable and you don’t see many finishes in our division. But I’m always going out there to finish the fight. I’m always getting ready one hundred percent for three rounds of back and forth action, but I have killer instinct and I’m gonna go out there with the mindset of finishing her as fast as I can.”