"Being on the show I got to grow as an athlete and a person, so I think
my mental state became a lot stronger compared to when I went in there." - Raquel Pennington 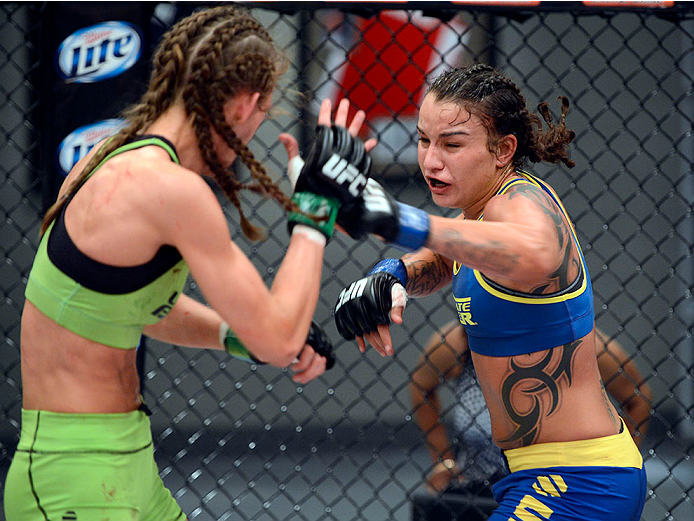 Raquel Pennington readily admits that her family “always had their hands full” with her. Not in a bad way, mind you, but when it came to sports, let’s just say she didn’t dabble.

She reels off the sports she participated in: basketball, softball, volleyball, cross country, swimming, and gymnastics, pointing out that her dream was to play in the WNBA. Oh yeah, and she wanted – and still wants – to become a doctor. But when she found out that her best friend’s father was teaching his kids the sweet science of boxing, that’s when her mother had to draw the line.

“My mom said ‘you must be insane. You’re way too pretty and your teeth are too nice. What’s wrong with you?’” laughs Pennington, who went on to receive the apt nickname “Rocky.” “All right, let me beat up on my brother and all my cousins to try and prove a point.”

Pennington eventually proved that point, but it took a broken back from a snowboarding accident in her senior year of high school to get there, as she used fighting as part of the rehab process. Even then, the family wasn’t exactly thrilled.

“I think it kind of shocked everybody, and at first, everybody wasn’t really supportive of it, especially when I was coming home all banged up and beat up, with huge bruises on my legs,” she said. “They were just like ‘why would you even do this to yourself?’ Nobody really understood it, but I think as they started to see me grow and really progress in the sport, and see my passion behind it and the opportunities that I had, they really started to support it.”

These days, the 25-year-old Pennington is a rising star in the mixed martial arts world, a semifinalist on season 18 of The Ultimate Fighter who is about to make her UFC debut on Saturday against castmate Roxanne Modafferi. There’s no WNBA, no boxing, but she isn’t complaining.

“I enjoy it, I have a burning passion for fighting, and I think having that opportunity (on TUF) really lit the flame for me and showed me everything I really wanted,” said Pennington, who entered the reality TV house with a 3-3 pro record, but left it with a reputation as a fighter to watch, one with the ability to not just engage in knock down, drag ‘em out brawls like her quarterfinal bout with Jessamyn Duke, but win them.

“I think the TUF experience was awesome,” she said. “It’s every fighter’s dream come true to go somewhere and be able to focus and train and just do what you dream of. It has its ups and downs, it’s hard to adapt to a bunch of different people that you don’t know when you first get there, and fighting so many fights in such a short period of time, that takes a toll on you. It beat me up, especially after fighting my war with Jessamyn and having just ten days to prepare for Jessica (Rakoczy), I was mentally, physically, and emotionally burned out.

“But I look back on it and I think I had the ultimate challenge of my life,” Pennington continues. “I feel like those people who become the Ultimate Fighter, they’re that person because they passed that ultimate challenge. You face everything that you can possibly think of, and I think a lot of people don’t see it as that. They see it as a reality TV show and fighters just putting on fights. I don’t think they look behind the scenes, and, of course, they don’t see a lot of it in exactly how it plays out and how much we actually have to go through. But I got to learn a lot about myself as a person, as an athlete, and it mentally helped me grow, so I felt a lot stronger when it comes to other things in my life.”

It used to be that those coming off The Ultimate Fighter were ridiculed by fans and the veterans of the sport, seen as TV stars who got a golden ticket to the UFC, and not “real” fighters. As the years have gone on through, it’s become more evident that going through the mental and physical rigors of six weeks removed from the outside world has a remarkable way of making good fighters even better. And that’s just the fighting part of the equation. The other is that unknown athletes get the opportunity to tell their stories and build an emotional connection with their fan base. For the women of MMA, who are just getting introduced to the UFC faithful, that’s a big deal.

“I think it’s giving everybody that chance to hear the fighters’ stories, and especially with the women, we’ve never had the opportunity, and finally the UFC opened it up for us,” she said. “And The Ultimate Fighter was a good place for them to start. You have (coaches) Ronda (Rousey) and Miesha (Tate), who are the face of women’s MMA and doing things, and then you have all these other fighters. You hear about girls here and there, and then you have all this up and coming talent. So the show was a good opportunity to share their stories and let everybody know each individual fighter for who they are. So many people are interested in the women and interested in why a woman would want to fight and want to do this. The show gave us women the opportunity to show exactly what we stand for and what we want. It’s not just going into that cage and fighting and having those open questions.”

Okay, so why have the female fighters stolen the spotlight from their male counterparts this season?

“In the women’s division, all the women are so hungry to put on those great fights and get that win that it’s a brawl every time a girl fight comes on, and I think a lot of people are starting to learn that and see how exciting it is,” she said. “The women will go out there and just go for broke, they don’t care.”

Well, that’s not entirely accurate, because it’s clear that fighters like Pennington care: about the fight, about winning, and about making an unforgettable impression. The 25-year-old from Colorado Springs did all three on season 18 of TUF, and while it bookended a win over Tonya Evinger and a loss to Rakoczy, the fight with Duke was the one that had the biggest impact on her.

“I found my confidence,” said Pennington. “Being on the show I got to grow as an athlete and a person, so I think my mental state became a lot stronger compared to when I went in there. And then being able to fight my war with Jessamyn, I answered a lot of questions for myself. How would I react if I broke something, how would I react if I took a cut, how would I react if we just stood there and completely banged like maniacs? And in that fight, we did everything that you could possibly think of. I took a cut, I messed up my hand, we stood there and banged, and I felt it. Now once I’ve had that break to let my body recover and rest, I think November 30th is gonna be great. I’m gonna come back ten times stronger and really show the athlete that I want the whole world to see.”