"I feel like anything can be thrown my way, and with the heart and
determination that I have, I think the only person that can beat me is
myself." - Raquel Pennington 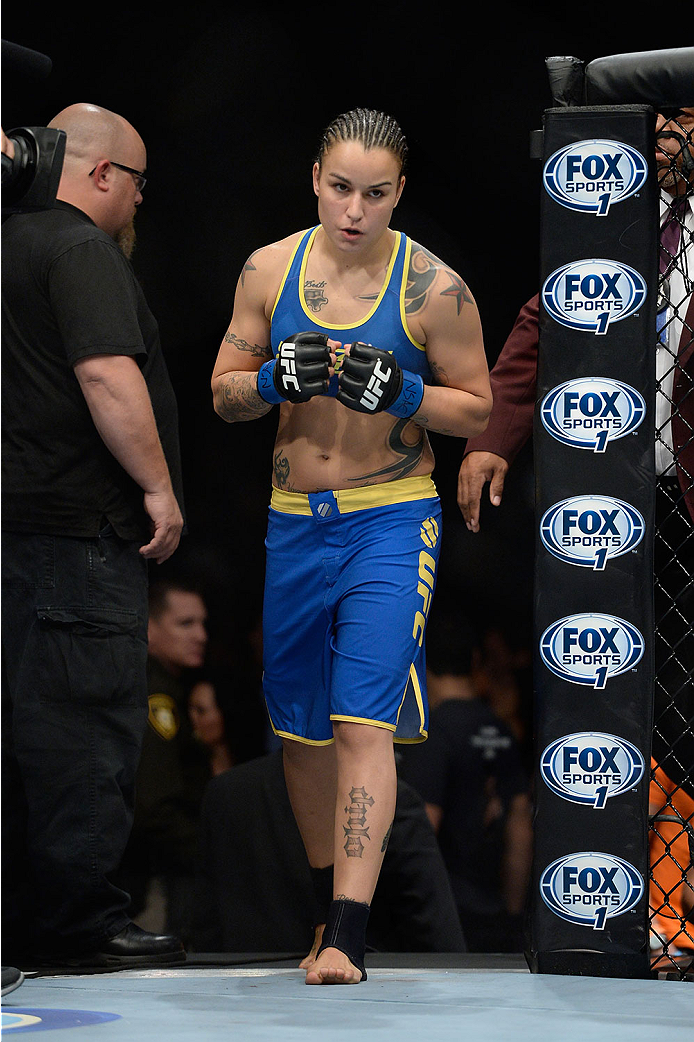 You’ve seen it dozens of times in combat sports. A fighter either accepts or refuses a bout because it’s “good business.” It’s why you see boxers compiling 25-0 records before fighting someone with even the remotest chance of beating them, or mixed martial artists padding their resumes on the local scene, hoping to attract enough attention to get a call from the UFC.

And hey, fighting is a tough way to make a living, so if that’s the way you think is best for you to make your money, who are we to argue?

Well, Raquel Pennington isn’t one of those folks that chooses business over fighting. Maybe that’s why she’ll step into the Octagon for her Saturday fight against Jessica Andrade with a .500 record, but she has no regrets.

“When it comes down to it, they’ve always offered me fights and I’ve never been the type of person to turn down any of them,” said Pennington. “I want to be the best that I can be, and you’re eventually going to have to face those people, so why not face them and see exactly where I stand and continue to be able to grow as a fighter and as a person. It’s been like that from the get go with my career.”

She’s not exaggerating. In her first six fights before earning a spot on season 18 of The Ultimate Fighter, the Colorado Springs native fought the likes of Cat Zingano, Sarah Moras, and Leslie Smith, showing an utter disregard for the idea of easing into her career or padding her record. Want an even crazier fact? Those six fights took place within a little over nine months, which she does admit “was extremely insane.”

It turned her into a fighter though, and after going 2-1 on TUF, defeating Tonya Evinger and Jessamyn Duke before losing in the semifinals to Jessica Rakoczy, she was brought back for the season finale card to face another vastly more experienced foe in cast mate Roxanne Modafferi.

Pennington won that one, earning a clear-cut unanimous decision and showing no hint of the first-time UFC jitters, which was no surprise at all.

“I think it helped having gone through The Ultimate Fighter before,” she said. “There was a lot of pressure with that, so going into the UFC it was just like another day in the office. You just gotta go out there and perform. You’re gonna be back in front of a crowd and back in front of your family, which is a fun thing to do. I was nervous going into it, just because of the fact that I had injuries from the house that kept getting worse and worse leading up to the fight, so I had a really rough training camp. But I think overall that was probably the only mental block that I had. But experiencing it, it was awesome. I thought I was going to be extremely nervous, but as soon as they announced my name and I started to walk out and see the crowd, it all fell into place for me.”

After getting that first UFC win and healing up, she and her coach Marc Fiore wanted to get back in action around this time, but all the cards for March-April were booked. Pennington stayed in the gym though, and when Julianna Pena suffered a knee injury and was forced out of her UFC 171 bout against Andrade, Pennington got the call and immediately accepted.

“She’s hungry to fight, and she comes out strong,” she said of Brazil’s Andrade, who is 1-1 in the Octagon. “She’s a little firecracker and she goes full blast, but I feel like anything can be thrown my way, and with the heart and determination that I have, I think the only person that can beat me is myself. I’m not going to underestimate any of my opponents or take away credit that they deserve, but at the same time I’m learning a lot about the fighter that I am and I have a lot of confidence in that.”

That fighter is willing to take on anyone at anytime.

“I’ve always been a very determined athlete,” said the 25-year-old Pennington. “Anything I put my mind to I go full blast at and I have high hopes of eventually becoming a world champion. Yeah, I might be 4-4, but for me, it’s about getting that new challenge. You’ve got these girls that are ranked in the top ten in the world, and if I have the opportunity to fight them, why not? I’d be crazy to turn it down. In a fight, it’s a 50-50 chance, and just because somebody is ranked in the top ten, and I haven’t had that opportunity yet, that doesn’t make them any better than me. So it gives me that opportunity to really explore and spread my wings.”

And if she got a call to fight champion Ronda Rousey tomorrow, would she take it?

“Most definitely,” she smiles. “I would love it.”