The Rapid Rise of Nico Musoke

"I’m trying to learn as much as possible, and I know when the bigger fights are given to me, I’ll be ready for them." - Nico Musoke 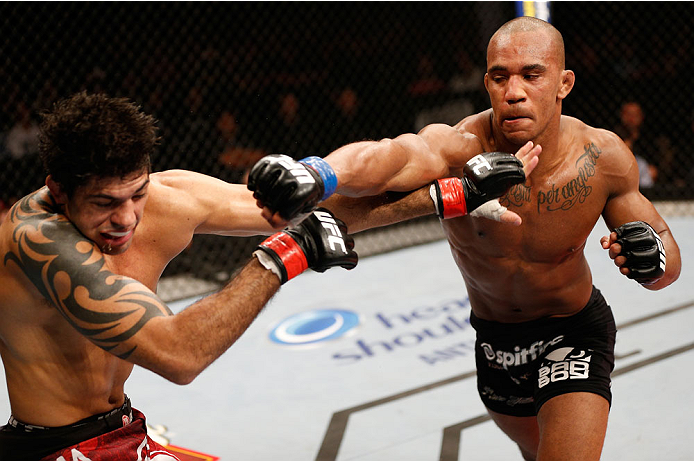 It’s Nico Musoke’s big week, complete with a UFC co-main event, his first fight in the United States, and a bout against a highly-touted welterweight prospect in Kelvin Gastelum. That’s a lot to take in all at once, but the Sweden native is going to enjoy every minute of it.

“I’m trying to prepare for it, so I’ll rehearse my English skills and hope that I won’t be just giving out standard answers,” he laughs. “But I’ll be ready and I’ll enjoy it.”

Truth be told, English is just one of four languages the 28-year-old knows, and he already speaks it better than some native speakers, so that won’t be an issue for him in San Antonio, and if his first two UFC bouts are any indication, the rest of this week’s business should go just as smoothly.

Of course, when it comes to the fight, anything can happen, as both Musoke and Gastelum well know from their recent outings. In March, the unbeaten Gastelum navigated some rough waters before eking out a split decision win over Rick Story. A month earlier, Musoke went through the same thing against Viscardi Andrade, but like Gastelum, he shook off the adversity and found a way to win. That resilience is a nice thing to have in your back pocket, even if it annoys you that you got yourself in that situation to begin with.

“In the beginning, I was just pissed that I made it that entertaining, in one sense,” he laughs. “That’s never according to anyone’s plan, but it’s what we do, and if something like that happens, you have to push through and try to learn from it and grow.

“It’s an experience,” Musoke continues, “and you get to prove to yourself that no matter what, if you’re still in it, there’s a fight. You’ve just gotta push through and find some way to get back and do what’s necessary to get the win. Of course, no one intends for things to happen that way, but in a fight, things can happen, so how do you react and what do you make out of it?”

Musoke reacted in the way that every fighter hopes he will. Gastelum did the same, so while some might look at the Arizonan’s performance and say he showed some cracks in his foundation, Musoke sees the positives as well.

“Sure, there were some weaknesses that were used very well on Story’s part, but all in all, he (Gastelum) gutted it out and showed that he’s a tough fighter,” he said. “And what it comes down to is that you need to do what’s necessary to get the W and he did that in his last fight. And I’ll be more than willing to do the same when we meet.”

That mindset, his skill set, and his ability to make his fights exciting made Musoke the perfect pick for the UFC Fight Night co-main event slot. Even so, many have wondered if it’s too soon for him, but when the opportunity presented himself, he didn’t think twice about accepting it.

“I couldn’t have scripted it better myself,” he said. “All I know is the call came and I was more than happy to oblige and say yes. It’s a great opportunity, and who wouldn’t take it? It couldn’t be better. Sure, me only having two fights and now stepping up into a co-main event, I understand what others might call a leap, but all in all, it’s good and I’m happy for it.”

And he’s happy to display his skills for fans in the States for the first time.

He laughs, careful not to look too far ahead. There’s a fight to deal with first, and it’s not just a big fight for him, but for his home country as well, considering Sweden is becoming a bit of a hotbed for UFC-level talent. That’s a big change from when he first started fighting, not just in terms of the talent being produced there, but in the way that talent is perceived by the masses.

“As a nation, our track record is there and we’re coming,” he said. “At the same time, on a personal level, I know I’m only two fights into the UFC. I’m willing to take it one fight at a time and I’m not thinking too far ahead. I’m trying to learn as much as possible, and I know when the bigger fights are given to me, I’ll be ready for them. On the other hand, it’s great that the sport is growing, our names are growing, they’re out there, and we’re getting more recognition from people or places that tried to not talk about us before. But now there’s no holding back, and they appreciate that we do what we do and at the same time represent the country.”