"I’m not gonna sit here and call anybody out. I never did and I never will. But I want to have my chance at the title." - Raphael Assuncao 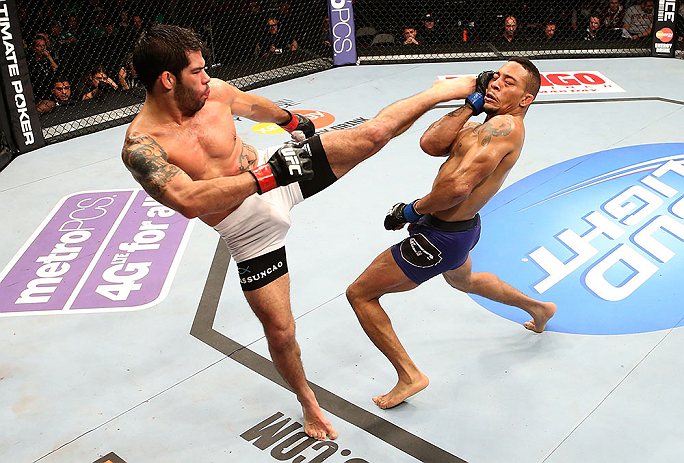 Many fighters who jump weight classes and have success in their new division are quick to say that they never look back and think about how life would have been if they made that leap earlier in their career.

Many fighters are also lying. Hey, it’s human nature to wonder how things would be different if you zigged when you should have zagged or said yes when you initially said no. But former featherweight and current bantamweight Raphael Assuncao is an honest man. So when you ask him if he thought his career might be different right now if he moved to 135 pounds back when he was in the WEC, he doesn’t lie for the sake of spewing the cliché ‘everything happens for a reason.’

“Yes, I do,” he admits. “Even when Miguel Torres was the (WEC bantamweight) champion, I used to look at these guys and they were my size, but I was fighting at featherweight. But I had some success at featherweight, I was happy there, and I thought that I’m a little guy but maybe I can pull off some wins here.”

And he did, going 3-2 in the WEC, beating Jameel Massouh, Yves Jabouin, and LC Davis, with his only losses coming to Urijah Faber and Diego Nunes. He was so entrenched in the featherweight top ten that when he moved to the UFC in 2011, he stayed there, only to get knocked out by Erik Koch at UFC 128. That made a decision he pondered for a while a lot easier.

“I wish I would have gone down there earlier, but I don’t regret anything,” he said. “I was happy there at the moment, but the guys there, they are bigger, and after the knockout it was just a bad icing on the cake.”

He laughs, and he can afford to do so considering his success as a bantamweight thus far. Since dropping ten pounds south, the Recife, Brazil, native has run off three wins without a loss, decisioning Johnny Eduardo, stopping Issei Tamura, and most recently outpointing Mike Easton in a December 2012 bout that saw him go three rounds with what turned out to be a broken arm. It shows not just the talent level of the nine year vet, but his heart as well, and at 30, he finally seems to be in a prime position to make a title run. It’s not something he takes lightly though, and he makes it clear that if he gets to the top, he wants to stay there.

“I think I would appreciate it more just because I know how long it took me, and I don’t want anything temporary,” he said. “I don’t want a temporary title shot or a temporary sponsor; I want something long-term. If it’s not long-term it doesn’t work for me.”

That’s the demeanor of a veteran who has seen the ups and downs of this sport, while watching heavily hyped prospects fizzle out when they proved not to be ready for the bright lights in the UFC. At this point, Assuncao won’t be fazed by anything. So when you ask him about returning home to fight in Brazil this weekend for the second time in his last four fights, he says that he’s treating it like a business trip. Sure, he’ll be glad to see family and friends, but any celebrations will take place after his fight with England’s Vaughan Lee. As for that fight, he’s not going to let the atmosphere affect what he needs to do when the bell rings.

“Once I’m in there, it’s the same thing,” he said. “I guess that’s good for me that I’m not falling for the hype as far as being there (in Brazil). I feel like I’m blessed to be able to go there, and very fortunate, but I try not to change because that can distract you.”

And Assuncao is not one for distractions, especially not these days. That doesn’t mean he’s old, but he is more mature and focused than he’s ever been, and as he puts it, “I think I still have a little fuel to burn.”

On Saturday, he’ll turn that heat up on Lee.

“I look at him as a very tough opponent,” said Assuncao. “On paper he’s not ranked as high as I am right now, but so be it. That’s the guy I’m fighting and the guy that has all my respect, and that’s the guy I’m gonna try to beat up next.”

A win makes it 4-0 at 135 pounds. Would that mean that Assuncao is going to start calling for anyone in particular on Saturday night in Fortaleza?

“I don’t care who the champion is,” he said. “And I’m not gonna sit here and call anybody out. I never did and I never will. But I want to have my chance at the title.”