Raphael Assuncao has worked as hard as possible to be a mainstay in the UFC rankings for the better part of the past decade
By E. Spencer Kyte, on Twitter @SpencerKyte • Jun. 2, 2020

Raphael Assuncao made his UFC debut 10 years ago in March, landing on the wrong end of things in a featherweight bout against Erik Koch at UFC 128 in Newark, New Jersey. A little over five months later, the Brazilian veteran made his first appearance at bantamweight, collecting a unanimous decision win over his countryman Johnny Eduardo in Rio de Janeiro.

He’s been a fixture in the Top 15 ever since, spending the majority of that time stationed in the Top 5.

To put that into perspective, Assuncao has been in a fixture in the rankings since before The Avengers assembled for the first time or Katniss Everdeen volunteered as tribute in The Hunger Games.

“I think the fight game is a pretty sincere game,” said Assuncao, reflecting on his place in the bantamweight hierarchy ahead of his co-main event showdown with former champion Cody Garbrandt this weekend at UFC 250 in Las Vegas. “If you go out and get 10 knockouts, you’re going to be appreciated. If you’re a champion who is able to defend the belt a couple times, you get appreciated.

“I’ve worked as hard as I can to be able to stay relevant in the division, as a Top 5 fighter for a long time and it shows. You can’t deny that I’ve been a Top 10 fighter for a number of years, and I appreciate that.”

In addition to being a Top 10 fixture for essentially the entirety of his bantamweight run, Assuncao has to be near the top of the list of best fighters to never fight for UFC gold, along with fellow standouts like Edson Barboza and Jussier Formiga.

It’s never been a matter of talent or results for Assuncao, who holds victories over former champ TJ Dillashaw, Pedro Munhoz, Aljamain Sterling, and Marlon Moraes while compiling an 11-3 record within the division. For the most part, it has been bad timing, as Assuncao’s most meaningful victories came when things were congested at the top of the division or a bigger name had just made waves, with the way his 2019 campaign kicked off serving as a perfect encapsulation of how things have routinely shook out for the divisional stalwart.

Entering the year on a four-fight winning streak that began with his back-to-back split decision wins over Moraes and Sterling and wrapped with a unanimous decision triumph over Rob Font, then champ Dillashaw was chasing flyweight gold, prompting the UFC to line Assuncao up against Moraes for the second time in 20 months.

Three minutes and 17 seconds into the first round, Assuncao’s place in the pecking order changed as he was forced to tap to a deep guillotine choke.

Dillashaw relinquished the bantamweight title seven weeks later, accepting a two-year ban from USADA after testing positive for EPO. With the title vacant, a matchup between Moraes and flyweight titleholder Henry Cejudo was put together to crown a new champion.

It’s the kind of thing that could send a man into fits of rage or depression or frustration, but as always, Assuncao has simply continued to roll with the punches and focus on himself.

“There is a little bit of a chip on my shoulder,” he said regarding his place in the division and not yet getting the opportunity to fight for the title, “but I feel like if I keep connecting the dots, it’s going to come.

“I’m not trying to imitate anyone else’s career or anyone else’s path,” continued the humble 37-year-old. “Some people have success earlier and some people do it later, and I feel like I’m still a guy that is connecting the dots and climbing the mountain.”

This weekend’s bout with Garbrandt is interesting for a number of reasons, not the least of which is the extremely different paths he and “No Love” have taken to arrive in the Octagon across from one another on Saturday night.

While Assuncao’s journey has been slow and steady, Garbrandt arrived in the UFC and made an instant splash, going from making his debut to masterfully outworking Dominick Cruz at UFC 207 to claim the bantamweight title in less than two years.

But just as his rise was meteoric and remarkable, Garbrandt’s move from champion back to contender has been equally sharp and sudden, as the 28-year-old enters this weekend’s penultimate bout on a three-fight losing streak, having been stopped in each of those contests. 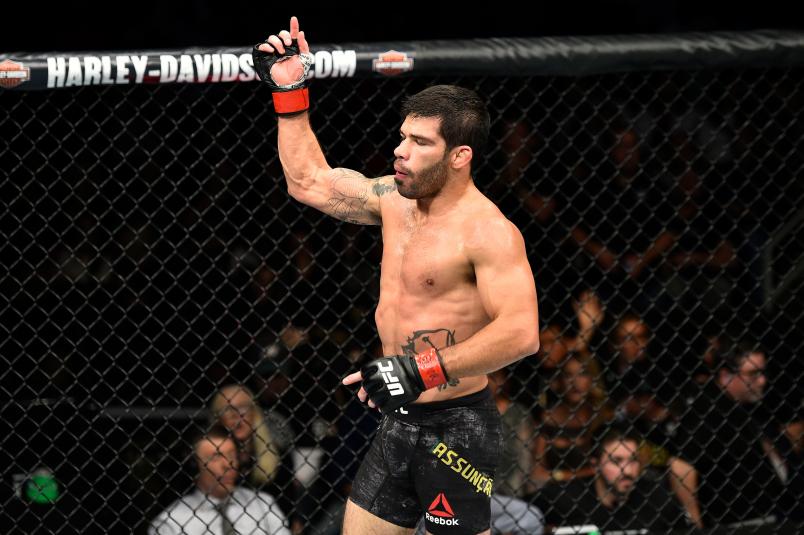 NORFOLK, VA - NOVEMBER 11: Raphael Assuncao of Brazil celebrates after knocking out Matthew Lopez in their bantamweight bout during the UFC Fight Night event inside the Ted Constant Convention Center on November 11, 2017 in Norfolk, Virginia. (Photo by Brandon Magnus/Zuffa LLC/Zuffa LLC via Getty Images)

NORFOLK, VA - NOVEMBER 11: Raphael Assuncao of Brazil celebrates after knocking out Matthew Lopez in their bantamweight bout during the UFC Fight Night event inside the Ted Constant Convention Center on November 11, 2017 in Norfolk, Virginia. (Photo by Br

“It’s two different paths — two completely opposite paths — and it’s going to be great,” he added regarding his matchup with Garbrandt. “Maybe he’s gotten wiser (after these losses) and that’s fine with me. He’s said some things in the past about ‘nobody knows you,’ but I don’t hold grudges too much.

“I do think he was rushed to the top because of a couple good performances, but I’m not hating,” Assuncao said of the former champion. “He took advantage of an opportunity, made some cash, and became the champion. Nice! Cool!”

One of the other reasons Saturday’s co-main event carries a great deal of intrigue is that each of Garbrandt’s last three bouts have played out in alarmingly similar fashion, with the emotional striker being drawn into heated exchanges where his desire to land an impactful blow has left him open to getting caught with one instead.

After Dillashaw was able to beat him in consecutive championship fights by landing finishing blows once Garbrandt was rattled and chasing a power shot of his own, Pedro Munhoz made no bones about his intention to follow the same blueprint ahead of their meeting at UFC 235.

For the first four minutes of the opening round, the two engaged in a technical, tactical battle, but after Garbrandt got wobbled and sat down late in the frame, the former champion got back to his feet and went hunting with haymakers.

Munhoz was more than happy to oblige Garbrandt in a stationary slugfest and ultimately connected on with a tight right hand that spun the overly aggressive Garbrandt to the canvas.

Assuncao is certainly aware of how Garbrandt’s last three outings have played out and the possibility that he’ll be able to follow suit on Saturday, but as always, the low-key stalwart is staying focused on what he does best and preparing for whatever transpires inside the Octagon this weekend.

“That’s a blueprint that been shown, but I’m planning three different blueprints,” he said regarding the similar nature of Garbrandt’s last three outings. “I’m planning for that style and two other styles; that’s what I have in mind right now.

“I’m not going to rely on ‘I’m going to catch him once, he’s going to get emotional and come back at me reckless;’ I have Plan A, B, and C.

“I have to make adjustments and I’m very critical of myself,” continued Assuncao, who began his career in 2004 and earned wins over Jorge Masvidal and Joe Lauzon on his way to compiling a 13-1 record and getting the call to compete in the WEC. “I’m still hungry to learn and to push and have a different approach, and I think that helps me in my approach to this whole game, not just this fight with Cody.”

With the division in a state of flux and in the spotlight on Saturday night, this weekend’s matchup with Garbrandt is another major opportunity for Assuncao — a chance to halt his two-fight slide by defeating a former champion; to re-affirm his standing as one of the top fighters in the division; and to cement his place in the hierarchy as everyone jockeys for position in the championship chase.

“It (a victory on Saturday) would mean a lot and I’m not going to try to hide that, but it’s not because I’m fighting Cody,” said Assuncao. “Beating anybody in the UFC means a lot, and it’s about me right now.

“Getting this win is very important for me, but I don’t want to put pressure on myself,” he added. “I want to be myself. I’m still learning, I’m still able to absorb knowledge, and I’m back on the horse.