Raoni Barcelos Is Ready To Breakthrough

Raoni Barcelos Sees His UFC Fight Night: Gane vs Volkov Showdown With Timur Valiev As The Perfect Opportunity To Crack The Bantamweight Top 15.
By GAVIN PORTER, ON TWITTER: @PORTERUFCNEWS • Jun. 24, 2021

Raoni Barcelos is tired of being one of the UFC bantamweight division’s best kept secrets.

At 16-1, the Brazilian is undefeated in the UFC and currently riding a nine-fight win streak that includes victories over Khalid Taha, Said Nurmagomedov and Chris Gutierrez. At UFC Fight Night: Gane vs Volkov, Barcelos believes that a memorable victory over Timur Valiev will finally earn him a shot at the bantamweight Top 15.

The Top 15 is where Barcelos believes he belongs and while he is certain that ranked fighters are avoiding him, he can’t blame them.

“I’m the dark horse in the bantamweight division. I’d feel the same way if I were them. I wouldn’t take a fight with a guy that isn’t ranked and that is on the rise, winning all his fights,” Barcelos told UFC.com. “But I’m sure this fight will be a game changer. Once I win this fight, I’ll get in the rankings and then they’ll have to fight me.”

Barcelos’ game-changing fight comes against Valiev, who is 17-2 (1 NC) and is exactly the type of opponent that Barcelos enjoys fighting, as he’s aggressive and not afraid to get in a brawl.

But when it comes to how the two match up, Barcelos wants to show that there are distinct levels between the two.

“I have an advantage in my boxing skills for sure, but I’ll surprise him at his own game. He’ll throw kicks and I’ll try to do the same,” Barcelos said confidently. “I’ll try to take it to the ground, focus on my wrestling and jiu jitsu and if I find an opening, I’ll submit him. I think the fans are expecting [a good fight]. I’m sure this fight will be really exciting and I hope to get a beautiful first-round knockout.”

One of the reasons that Barcelos is so focused on finishing Valiev is because he wasn’t able to put Khalid Taha away in his last trip to the Octagon. The lead-up for that fight was particularly tough on Barcelos, as two of his corners tested positive for COVID-19 and were no longer available to coach him against Taha.

"I hope to get a beautiful first-round knockout."

Raoni Barcelos (@BarcelosRaoni) talks about how he believes his matchup with Timur Valiev could be Fight of the Night at #UFCVegas30 🔉⬆️ pic.twitter.com/JrlaCpWMZr

Barcelos’ father and coach, Laerte, was one of those cornermen absent from Barcelos’ side on fight night. Fighting without him present wasn’t something that Barcelos had ever experienced before and it forced him to fight a difficult opponent without his most important resource.

“I had to overcome a lot of adversities. A lot of people don’t know that Pedro Rizzo tested positive in Brazil. We came with two corners, my brother Andre Filpe and my father Laerte Barcelos. When we got to the US, he tested positive, and I ended up with only one corner,” Barcelos said. “My opponent was really tough, he was coming off of a knockout and I beat him at his own game, which is striking, so I proved to myself that I’m a lot tougher than I think.” 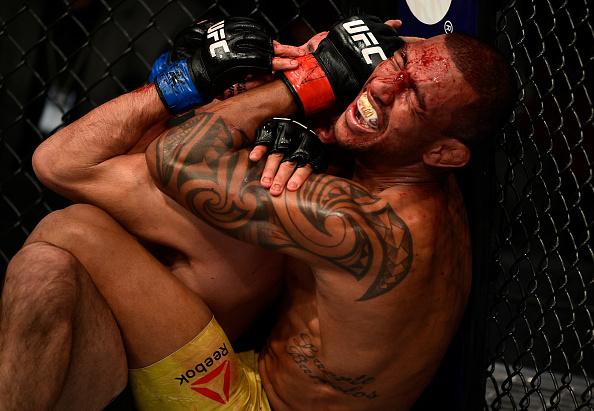 On June 26, Barcelos will have a complete corner by his side and he can feel the good vibes heading into UFC Fight Night: Gane vs Volkov.

“I’m really happy. The energy is great here,” Barcelos said. “I hope to put on a great performance. I know I couldn’t finish my last fight against Taha so I need to finish this fight against Timur in order to get in the top 10. I’m ready and I’m excited for this moment.”

Don’t miss Barcelos vs Valiev on the main card of UFC Fight Night: Gane vs Volkov, which airs live on ESPN+ at 4pm ET/1pm PT.