Ovince Saint Preux was dominant Saturday night at UFC 174 in his win over Ryan Jimmo, and the voting members of the UFC official rankings rewarded the former college football player with a three-spot jump into the top 10 of the light heavyweight rankings.

OSP leapfrogged Jimi Manuwa and Rafael "Feijao" Cavalcante into the No. 10 spot.

Saint Preux was asked after UFC 174 who he wanted next and OSP said the plan he made for himself is in motion.

"I told myself - I broke into the top 15 and hopefully I'll be top 10 now," said the prophetic Saint Preux. "Then after that I'll shoot for the top 5, then top 2, then a championship." 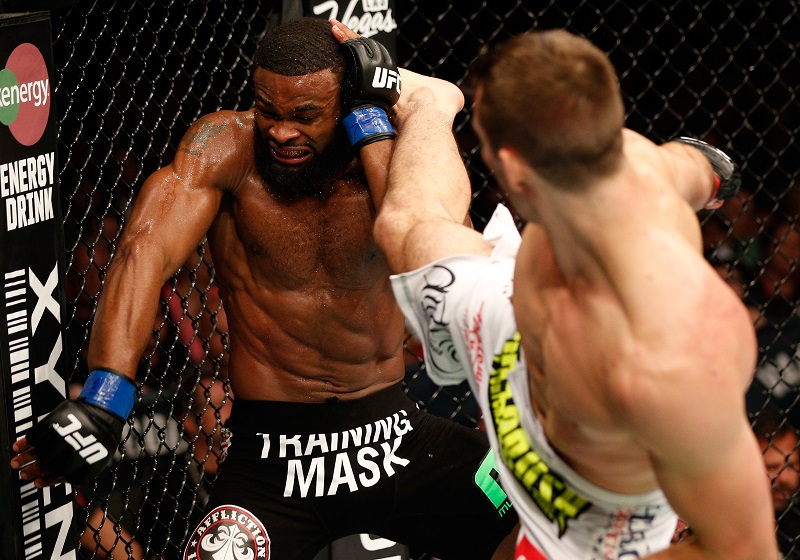 After a not-so-impressive showing at UFC 174, Tyron Woodley dipped in this week's welterweight rankings, falling to No. 4, while Carlos Condit jumped ahead to the No. 3 spot.

Also at light heavyweight, Ryan Bader, who easily disposed of "Feijao" in a decision win Saturday, passed Mauricio "Shogun" Rua to take the No. 8 spot, dropping the former champ to No. 9. Fabio Maldonado replaced Gegard Mousasi in the No. 15 spot.

At middleweight, Vitor Belfort jumped ahead of No. 1 contender Lyoto Machida into the No. 2 spot behind champion Chris Weidman and No. 1-ranked Anderson Silva. Also in the division, CB Dollaway jumped ahead of Costas Philippou into the No. 9 spot. Mark Munoz, back in the rankings after being removed last week while he worked out a new contract with the UFC, is at No. 13, while Tim Boetsch and Brad Tavares moved down to the No. 14 and 15 spot, respectively.

In the bantamweight division, Mike Easton plummeted this week after his disappointing decision loss to Yves Jabouin at UFC 174. Easton fell from No. 8 all the way down to No. 14. Johnny Eduardo moved up to take the No 8 spot, while Bryan Caraway, Francisco Rivera, Dominick Cruz, Alex Caceres and Erik Perez all moved up one spot.

At heavyweight, fresh off a win in his return to the Octagon, Andrei Arlovski was voted onto the list at No. 15, booting Brendan Schaub from the rankings. Soa Palelei moved up to No. 14.