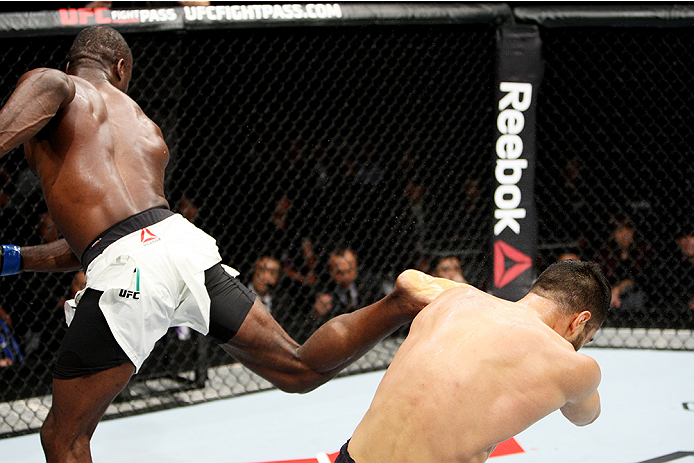 Uriah Hall has been hanging around on the outside of the top 15 in the UFC middleweight division for a while now. On Saturday night, “Primetime” kicked his way onto the list in dramatic fashion.
Hall knocked out Gegard Mousasi with a spinning back kick in the second round at UFC Fight Night: Barnett vs. Nelson. Hall, who was previously unranked, climbs to No. 10 at 185 pounds while Mousasi drops from No. 6 to eighth in Monday’s official UFC rankings release.
It’s Hall’s second win in just under two months after beating Oluwale Bamgbose in Aug. via a first-round knockout. The loss for Mousasi snaps a two-fight win streak.
Also rising is heavyweight Josh Barnett, who climbs two spots to No. 6 passing Ben Rothwell and Mark Hunt. Barnett beat Roy Nelson in Saturday’s main event via unanimous decision. It was Barnett’s first fight since losing to Travis Browne in Dec. of 2013. Nelson suffers only a one-spot drop to No. 12.
Dominick Cruz passes Renan Barao for the No. 1 spot in the bantamweight division. Cruz has fought only once since 2011 but is scheduled to face division belt-holder TJ Dillashaw in January.