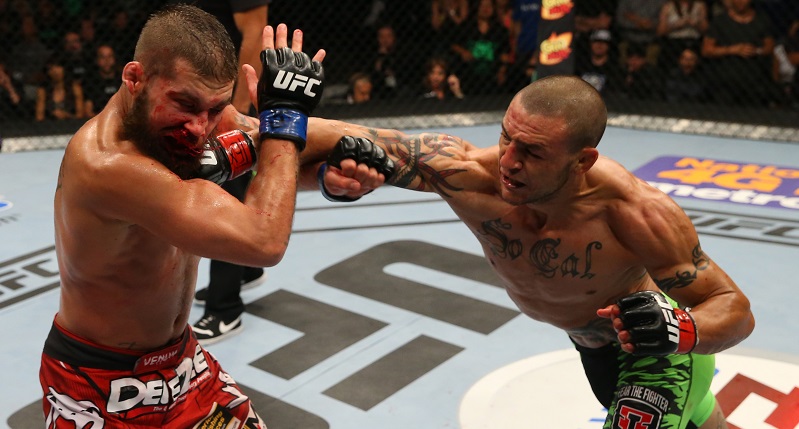 After another impressive performance Saturday night in San Antonio to extend his win streak to six straight inside the Octagon, Cub Swanson may have positioned himself nicely for the next title shot in the featherweight division.

Swanson made a big move in this week's official UFC rankings, jumping over Ricardo Lamas and Frankie Edgar into the No. 2 spot at 145 pounds, behind only No. 1 Chad Mendes and champion Jose Aldo, who will meet for the title at UFC 176 in August.

After Fight Night San Antonio, Swanson was asked if he should be next in line for  a title shot, but the top contender said he doesn't feel like he needs to ask for anything. 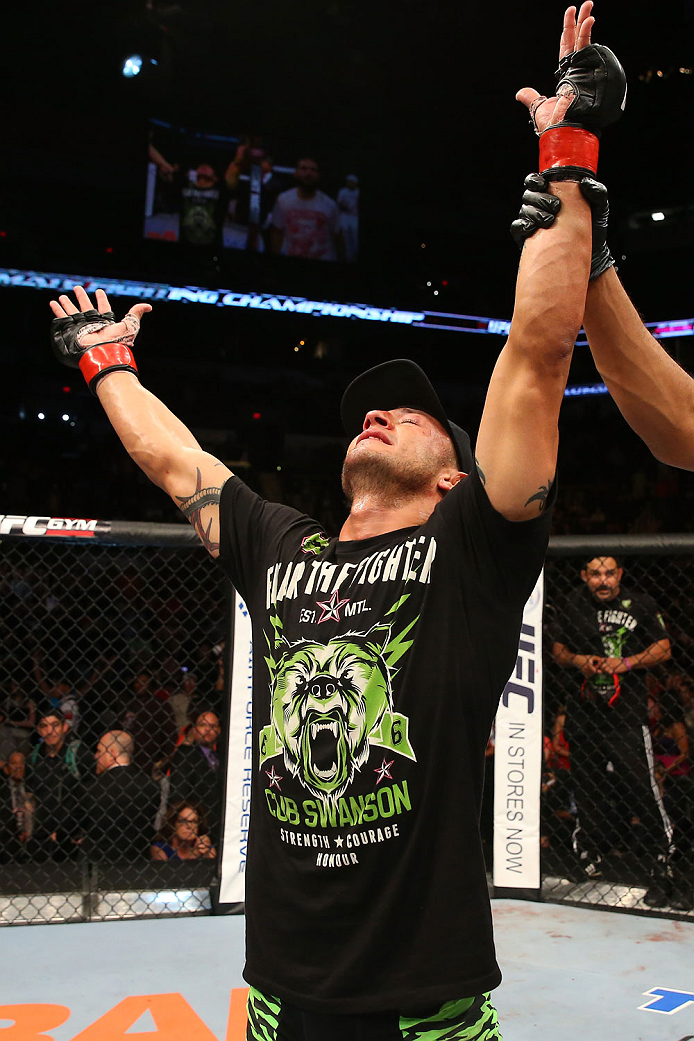 "For me, winning a title is like a dream," Swanson said. "It's something I want to do so bad, but it is just something that will come to me if I keep doing what I'm supposed to do. I don't feel like I have to beg for it. If I keep putting on good performances it'll come."

Jeremy Stephens, Swanson's opponent Saturday night, was impressed with Swanson after the two stood toe to toe for 25 minutes inside the Octagon.

"I just fought one of the top guys. What is he at, six fights in a row now? If you ask me, he does deserve (a title shot)," Stephens said. "Mendes deserves this next shot, then why not Cub Swanson? He's been beating guys up and dominating guys, so I feel like he should get the shot."

Stephens moved up a spot into the top 10 despite his loss, dropping Dennis Bermudez to No. 11. Edgar and Lamas now sit at No. 3 and 4, respectively, and Nik Lentz jumped past Clay Guida and Dennis Siver to No. 7, dropping them to No. 8 and 9, respectively. Charles Oliveira was voted into the rankings and now sits at No. 14 after his unbelievable submission victory over Hatsu Hioki, becoming the first man to submit the Japanese fighter in his career. Conor McGregor moved up a spot to No. 12.

In the bantamweight division, Takeya Mizugaki moved up to No. 5, dropping Eddie Wineland to No. 6. Bryan Caraway jumped ahead of Johnny Eduardo into the No. 8 spot and Alex Caceres, who faces No. 1 Urijah Faber at UFC 175 this Saturday, moved up to No. 11, dropping former champ Dominick Cruz to No. 12.

At Flyweight, Brad Pickett was voted up a spot into the top 10, dropping Timothy Elliott to No. 11. In the lightweight division, Michael Johnson leapfrogged Myles Jury to No. 8, and Bobby Green jumped past Edson Barboza to No. 12. At light heavyweight, Mauricio Rua passed Ryan Bader to secure the No. 8 spot. Bader, now at No. 9, faces off against No. 10 Ovince Saint Preux in August in the main event of Fight Night Bangor. Fabio Maldonado jumps up to No. 14 and Ryan Jimmo takes the No. 15 spot.

Brendan Schaub is back in the top 15 this week in the final slot, while Andrei Arlovski moved up a spot to No. 14. At middleweight, Thales Leites is now ranked No. 15 after previously being unranked.