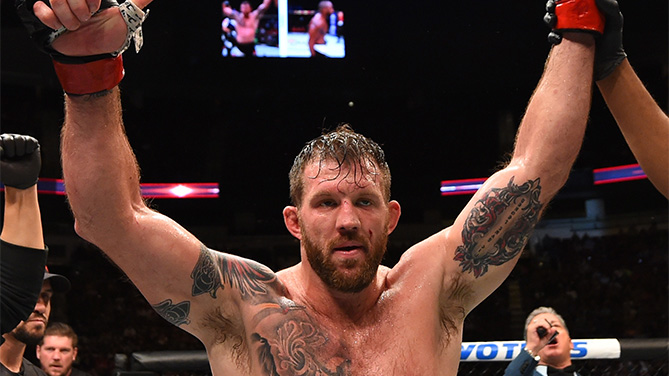 Many feel Ryan Bader’s performance at UFC 192 on Saturday was the best of his career. His unanimous decision over Rashad Evans extends his winning streak to five and strengthens his contention as the No. 1 light heavyweight title contender.
RELATED: Check out the official UFC rankings | UFC 192 Talking Points | Gus shines at UFC 192 | Cormier rises to the occasion
Bader jumped to No. 3 in Monday's Official UFC rankings release at 205 pounds, passing Glover Teixeira but remaining behind Anthony Johnson and Alexander Gustafsson. Of course, Johnson and Gustafsson have already had their crack at belt-holder Daniel Cormier.
The biggest climb comes from the women’s bantamweight division, as Julianna Pena hops five spots to No. 7 after defeating Jessica Eye – who’s now ninth – by unanimous decision.
Sergio Pettis can add a UFC ranking next to his name for the first time in his young career. The 125-pounder’s unanimous decision victory over Chris Cariaso vaults him to No. 15 on the flyweight ranks. Though he remains behind Cariaso, who dropped from 10th to 12th.
Voters punished Johny Hendricks for not making weight with his bout against Tyron Woodley, which was scheduled as a co-main event at UFC 192. Hendricks drops from first to third in the welterweight ranks, while Woodley – who stepped on the scale at the official weigh-ins on Friday to prove he was ready – jumps to No. 2.