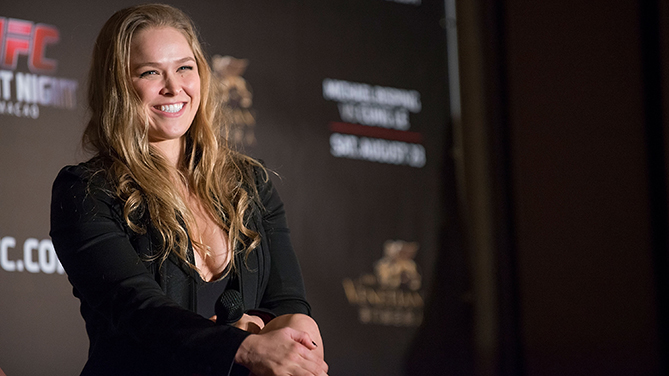 After being unable to compete at UFC 177 because of an injury suffered while cutting down to 135 pounds, former UFC bantamweight champion Renan Barao has fallen in the latest release of the UFC official rankings. Current women’s bantamweight champion Ronda Rousey supplanted Barao in the No. 8 spot on the pound-4-pound list.
Rousey was still one of the main topics of conversation during UFC 177, despite the fact that the “Expendables 3” star wasn’t fighting.
That’s because Bethe Correia took out another member of the “Four Horsewomen” when she stopped Shayna Baszler last Saturday night, then immediately called out Rousey after the fight. There were reports that Rousey texted UFC president Dana White and said she’d like to face Correia, who jumped up a spot to No. 9 in the women’s bantamweight rankings.
> Check Out The Complete Official UFC Rankings Page
In the light heavyweight division, Glover Teixeira moved up a spot into a tie for No. 3 with former division champion Rashad Evans. Anthony “Rumble” Johnson moved down a spot to No. 5.
In the bantamweight division, Joe Soto, fresh off his amazing performance against champion T.J. Dillashaw at UFC 177, made his debut appearance on the rankings at No. 15. Eddie Wineland moved into the top 5, passing Takeya Mizugaki, and Johnny Eduardo moved ahead of Bryan Caraway into the No. 8 spot.
Other movement on the p-4-p list included a jump for Demetrious Johnson from No. 5 into a No. 4 tie with current UFC middleweight champion Chris Weidman. UFC welterweight champion Johny Hendricks fell to No. 10.
At flyweight, Timothy Elliott moved up to the No. 9 spot, while Zach Makovsky (No. 10) and Brad Pickett (No. 11) both fell a spot, respectively.
Also, Dan Henderson moved ahead of Ryan Bader to No. 7 at light heavyweight, Tim Boetsch passed Mark Munoz into the No. 13 spot at middleweight, and Minotauro Nogueira passed Stefan Struve to take over the No. 12 spot at heavyweight.