Ovince Saint Preux’s shocking TKO finish against Mauricio “Shogun” Rua at Fight Night Uberlandia shook up the light heavyweight division.
In this week’s rankings release, OSP jumped up a spot to No. 9, while Shogun suffered a two-spot dip down to No. 11. Ryan Bader, who earned a decision win against Saint Preux earlier this year, moved up a spot past Dan Henderson to No. 7. Jimi Manuwa moved up to No. 10 despite being forced out of his scheduled bout with Shogun due to injury.
> Check out the complete official UFC rankings page 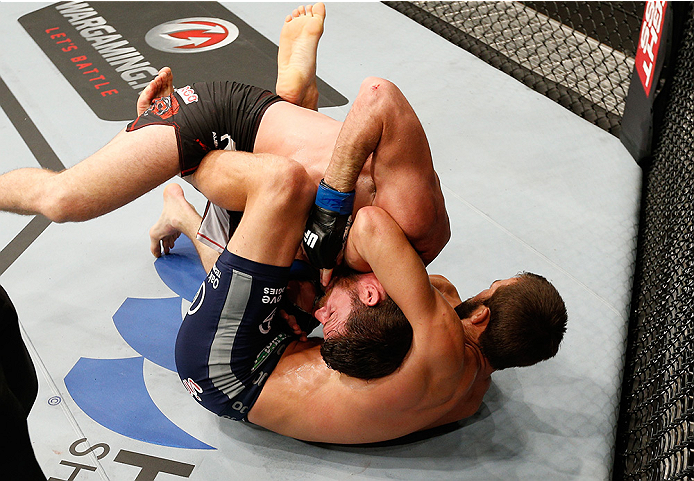 After his impressive win against Michael Bisping at Fight Night Sydney, Luke Rockhold has elevated his name in the title conversation at 185 pounds. He didn’t move up in the rankings at middleweight, but Vitor Belfort, who will challenge Chris Weidman at UFC 184 for the title, moved up to the No. 2 spot, passing Jacare Souza.
In the featherweight division, Chan Sung Jung, who recently announced a two-year sabbatical from the UFC while he completes his military service, was removed from the rankings while he is away from the UFC. That opened the door for the rest of the division, as No. 8-14 all moved up a spot, including Dennis Siver to No. 8 and Max Holloway to No. 14. Tatsuya Kawajiri takes the No. 15 spot.
In other movement, Jake Ellenberger, who is set to face Kelvin Gastelum in the co-main event of UFC 180 this weekend, moved up a spot past Demian Maia to No. 7 at welterweight. Jorge Masvidal moved up two spots at lightweight to No. 11, passing Michael Johnson and Edson Barboza. Mitch Gagnon moved past Joe Soto to No. 14 at 135 pounds.