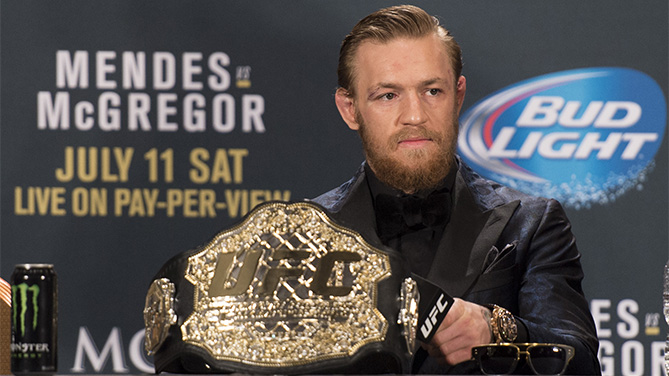 In Monday’s rankings release, new interim UFC featherweight champion Conor McGregor moved up to the No. 1 spot at 145 pounds on the heels of his epic victory against Chad Mendes at UFC 189. Mendes dropped two spots to No. 3 in the featherweight division.

McGregor’s TKO finish of Mendes, an opponent many picked to beat McGregor at the MGM Grand Garden Arena in Las Vegas, also earned the Irishman a seat at the big boy table. ‘Notorious’ makes his first appearance on the pound-4-pound rankings at No. 14, one spot ahead of Frankie Edgar. 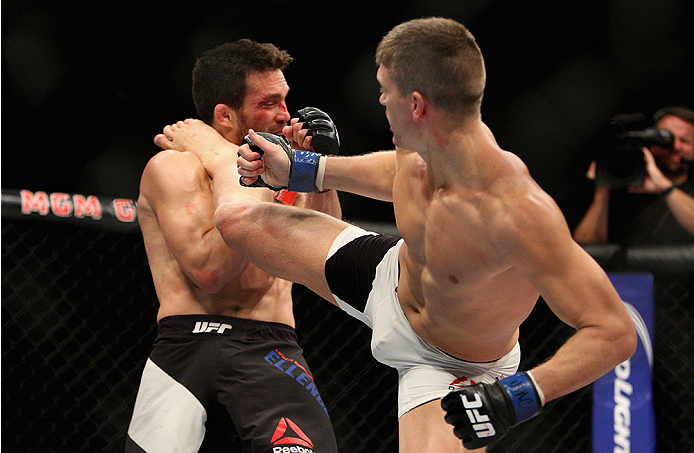 Stephen Thompson kicks Jake Ellenberger in their welterweight bout during the Ultimate Fighter Finale. (Photo by Mitch Viquez/Zuffa LLC)" align="right" />Stephen “Wonderboy” Thompson put an exclamation point on International Fight Week when he knocked out Jake Ellenberger with a highlight reel spinning heel kick in the main event of The Ultimate Fighter Finale on Sunday. The talented young welterweight made a massive jump in this week’s rankings, all the way to No. 9. Ellenberger dropped three spots to No. 12.

In other welterweight news, Gunnar Nelson’s rear naked choke finish against Brandon Thatch on the UFC 189 main card earned “Gunni” a four-spot jump to No. 11 at 170 pounds.

Jeremy Stephens and Dennis Bermudez probably would have earned Fight Of The Night honors at UFC 189 had it not been for the Fight Of The Year leading contender Robbie Lawler vs. Rory MacDonald. Stephens jumped three spots in the rankings at 145 pounds after his victory with a jumping knee KO. Bermudez fell one spot to No. 9 behind Stephens.

Thomas Almedia improved to a perfect 20-0 at UFC 189 and 3-0 in the UFC. The Brazilian KO artist did it again versus Brad Pickett to kick off the main card at UFC 189, earning him a four-spot jump in the bantamweight division to No. 10 overall.

Michelle Waterson’s strawweight and UFC debut went according to plan, as she finished Angela Magana to improve to 13-4. She makes her debut in the 115-pound rankings at No. 12.