While TJ Dillashaw and Cody Garbrandt continue to campaign for the next title shot against Dominick Cruz, John Lineker made a big statement in the bantamweight division with his win against John Dodson at Fight Night Portland.

Lineker moves up a spot to No. 2 in the rankings, dropping Rafael Assuncao to No. 3. Jimmie Rivera continues to climb since his massive win over Urijah Faber at UFC 203. “El Terror” takes the No. 4 position and drops Bryan Caraway down to No. 5.

After the event, Lineker made his case to Megan Olivi as to why he believes he should be the one to face Cruz next.

“I think I proved to the UFC that I can do this,” Lineker said. “I’ve been winning fight after fight. But if they think I need to fight another fight, I’ll do that also.”

Brandon Moreno’s upset victory in his UFC debut against Louis Smolka shook up the flyweight division. Moreno is a competitor on this season of The Ultimate Fighter and his early exit allowed him to step in for Sergio Pettis on short notice against Smolka, who had won four in a row. 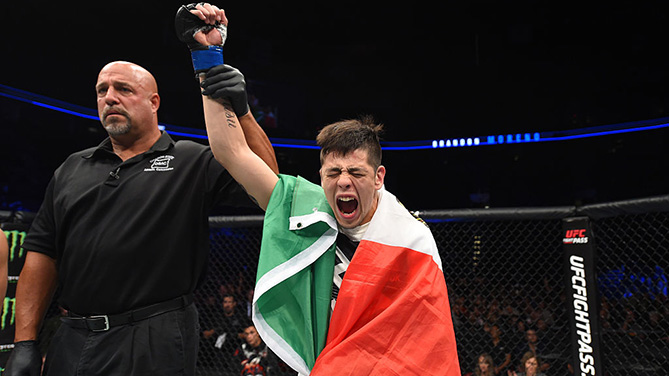 Moreno’s huge win vaults him into the rankings at 125 pounds. He takes the No. 15 spot and drops Smolka four slots down to No. 13. John Moraga, Matheus Nicolau, Dustin Ortiz and Just Scoggins all jumped ahead of Smolka.

Will Brooks took a tough defeat against Alex “Cowboy” Oliveira, who missed weight by 5 1/2 pounds. The loss dropped Brooks from the No. 12 spot in the lightweight division all the way out of the Top 15 ranks.

Rashid Magomedov reappeared in the lightweight rankings at No. 15 and Gilbert Melendez (No. 11), Francisco Trinaldo, Al Iaquinta and Evan Dunham all jumped up one spot.