Max Holloway’s TKO win against Anthony Pettis at UFC 206 changed the look of the rankings in a big way.

With the win, interim featherweight champion Holloway moved into the No. 1 position at 145 pounds, passing Frankie Edgar, who drops to No. 2. Holloway has earned a shot at undisputed champ Jose Aldo at some point in 2017.

Holloway also moves into the pound-for-pound ranks on the strength of his 10th straight win, appearing at No. 10 – five spots behind Aldo. Pettis drops one spot to No. 6 at featherweight.

Toronto’s own Misha Cirkunov pulled off a huge upset win against Nikita Krylov, submitting the Ukrainian by guillotine. Cirkunov breaks through to the top 10 at light heavyweight and takes Krylov’s No. 8 rankings, dropping “The Miner” two spots to No. 10.

Kelvin Gastelum appeared on the 185-pound rankings at No. 10 after his win over Tim Kennedy. Gastelum still plans to move back to 170 pounds at some point but gets Vitor Belfort at middleweight next in Brazil on March 11. 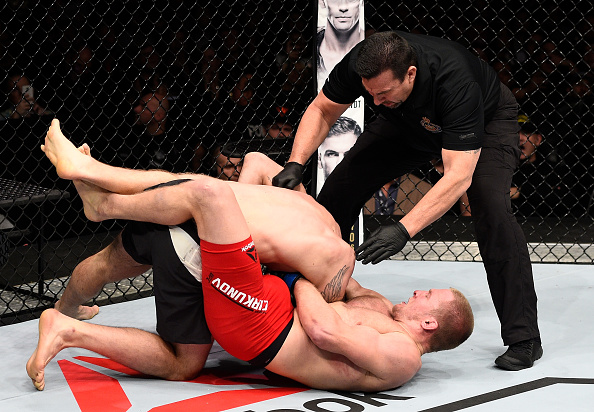 Heavyweight rising stars Derrick Lewis and Francis Ngannou both moves up a spot to No. 9 and 11 on the strength of their finish wins in Albany, respectively. Ngannou will get a serious step up in competition when he takes on No. 8-ranked Andrei Arlovski in Denver on Jan. 28.

Valerie Letourneau dropped four spots at strawweight after losing to unranked Viviane Pereira in Toronto. Paige VanZant (No. 7)), Maryna Moroz (No. 9), Jessica Aguilar (No. 10), Michelle Waterson (No. 11), Jessica Penne (No. 12), and Juliana Pena (No. 14) all moved up one spot.

Matt Brown dropped a spot to No. 15 at welterweight after losing to Donald “Cowboy” Cerrone, who didn’t move up after the head kick KO. Dustin Ortiz moved up two spots to No. 9 at flyweight after a win over Zach Makovsky, who fell four spots to No. 11.