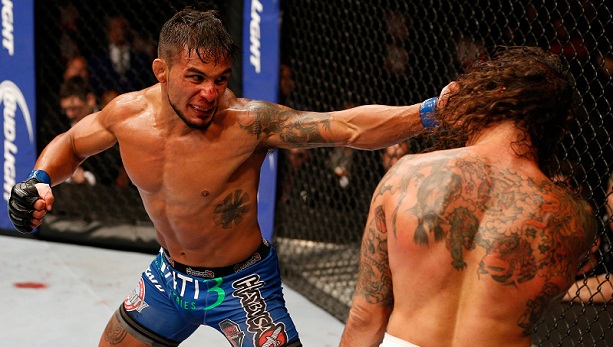 Green, coming off a decision win against No. 3 lightweight Josh Thomson, made the biggest jump of the week, moving all the way up to No. 7 after entering the weekend at No. 13. The loss dropped Thomson three spots to No. 6.

Many thought Bermudez was grossly undervalued at No. 12 last week, but "The Menace" was rewarded for his dominant second-round submission win over Clay Guida, getting voted up five spots to No. 7 at featherweight. Guida dropped five spots to No. 12 with his loss.

Maybe the most shocking move was one that didn't happen at all, as Anthony "Rumble" Johnson stays at No. 5 despite his vicious KO win over Antonio Rogerio Nogueira. 'Lil Nog was voted onto the light heavyweight list at No. 14, dropping Fabio Maldonado to No. 15 and Ryan Jimmo off the list entirely.

Last week was a great one for the new No. 1 contender for Jon Jones' light heavyweight title. Daniel Cormier got the fight he has been waiting for since his move to 205, and voters gave the former heavyweight another reason to smile on Monday.

Cormier was voted onto the pound-4-pound best list and took the No. 15 spot away from lightweight Gilbert Melendez.

The lightweight and featherweight divisions underwent a major shakeup from top to bottom. At 145, Cub Swanson moved past Frankie Edgar into the No. 2 spot, Dustin Poirier leapfrogged Chan Sung Jung into the No. 5 spot, and Conor McGregor jumped past Dennis Siver to No. 9.

In the welterweight division, Robbie  Lawler maintained the top spot and Matt Brown stayed at No. 5. Demian Maia jumped past Jake Ellenberger into the No. 7 spot, while Dong Hyun Kim passed Tarec Saffiedine into the No. 9 spot. Rick Story moved onto the list at No. 15, dropping Erick Silva off.