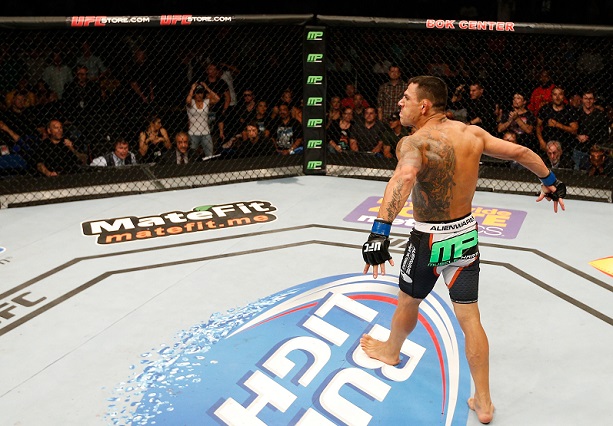 After arguably one of the most shocking knockouts in recent history, Rafael dos Anjos made a big move in this week’s official UFC rankings after becoming the first man in history to finish Benson Henderson by KO or TKO at Fight Night Tulsa.

The 29-year-old Brazilian jumped up two spots in the latest rankings update to No. 3 on the lightweight list. Dos Anjos isn’t known for his punching power, but he has plenty of confidence in his stand-up abilities.

“I have pretty much confidence in my stand-up game, which I’ve been training a lot,” dos Anjos said at the Fight Night Tulsa post fight press conference. “The game plan was to come in with patience, but throwing hard. That’s what I did. “

With the loss, Henderson fell hard in the rankings, all the way down to No. 4. The 155-pound No. 2 Contender Gilbert Melendez, who is set to face champion Anthony Pettis is December, moved up a spot to No. 1. Khabib Nurmagomedov jumped up a spot to No. 2 behind Melendez, and Donald Cerrone, who will face UFC newcomer Eddie Alvarez in the co-main event of UFC 178, fell a spot to No. 5.

Welterweights Tyron Woodley and Jordan Mein were both rewarded for their perfroamnces in Macao and Tulsa, respectively. Woodley responded after a disappointing loss to Rory MacDonald his last time out with a first-round TKO victory over No. 10 Dong Hyun Kim. Woodley moved up a spot to No. 3 at 170, passing Carlos Condit.

Mein, whose big left hook put Mike Pyle out Saturday at the BOK Center, makes his first appearance in the rankings, debuting at No. 13. Pyle fell two spots to No. 15. Also in the welterweight division, Demian Maia moved up a spot to No. 7, passing Jake Ellenberger.

In the light heavyweight division, Anthony “Rumble” Johnson moved up a spot into a tie at No. 4 with Glover Teixeira. Ryan Bader moved past Dan Henderson into the No. 7 spot.

There was some interesting movement in the pound-for-pound rankings in the latest rankings update. UFC middleweight champ Chris Weidman passed UFC flyweight champ Demetrious Johnson into the No. 4 spot behind Jon Jones (No. 1), Jose Aldo (No. 2), and Cain Velasquez (No. 3). UFC welterweight champ Johny Hendricks passed UFC women’s bantamweight champion Ronda Rousey, moving into the No. 9 position. Alexander Gustafsson moved up to no. 13, Daniel Cormier jumped to no. 14, and Gilbert Melendez re-appeared on the list at No. 15, booting Benson Henderson completely. 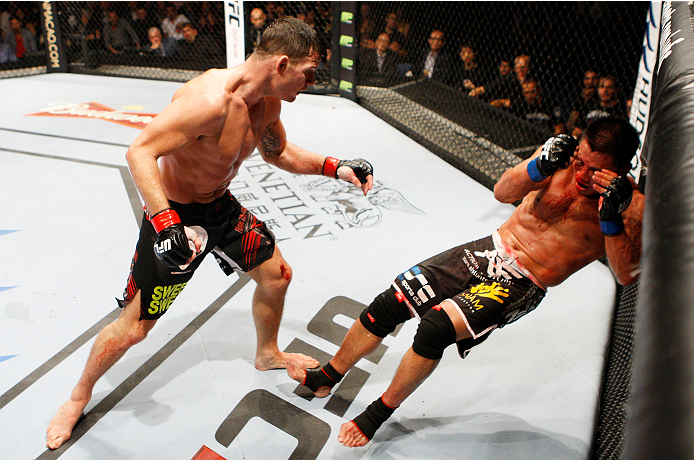 Middleweight Michael Bisping remains at No. 8 despite an impressive TKO win over Cung Le in Macao, but there was some movement in the division. Yoel Romero moved up to No. 10, passing Costas Philippou, while Thales Leites jumped up three spots to No. 12 after his big KO win over Francis Carmont in Tulsa. Carmont dropped three spots to No. 15.

In the lighter weight classes, Takeya Mizugaki passed Eddie Wineland into the No. 5 spot at 135 pounds, while Yves Jabouin made his first appearance in the rankings at No. 15, dropping Wilson Reis, who made his flyweight debut in Tulsa, from the list.

At 125 pounds, John Lineker moved up to No. 6, passing Ali Bagautinov, while Zach Makovsky and Timothy Elliott both moved up a spot into the No. 9 and 10 slots, respectively.