Taking a look at the latest welterweight edition of the UFC Fighter Rankings... 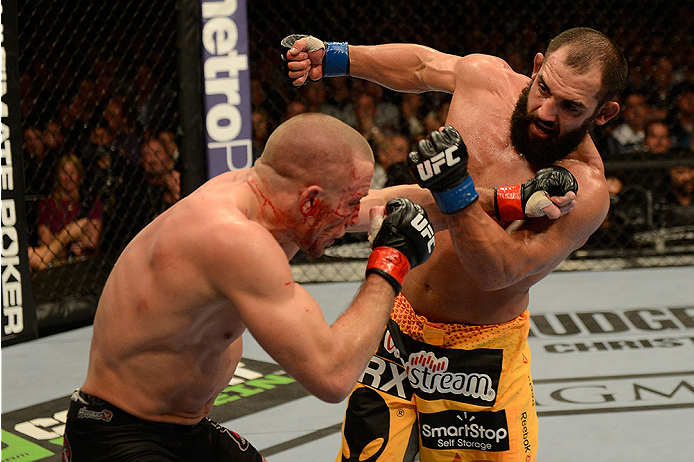 After the controversial win by Georges St-Pierre over Johny Hendricks at UFC 167 and an upset victory by Robbie Lawler over Rory MacDonald on the same night, the welterweight division got a bit of a shakeup when the latest edition of the UFC Fighter Rankings hit the internet Monday. So how does the 170-pound weight class look today? Let’s find out.

The Champion - Georges St-Pierre
It’s easy to say that longtime welterweight boss Georges St-Pierre has lost a step following his close split decision victory over number one contender Johny Hendricks, but the more accurate statement is that Hendricks fought a helluva fight against one of MMA’s best ever and just fell short of the win on the two of the three judges’ scorecards. But what of GSP, who said after the bout that he needed some time off to deal with undisclosed personal issues? Did these issues affect his performance, and if so, will he need to settle them before returning to the Octagon? Only time will tell, but for the moment, the champion’s uncertain status makes the fights among the rest of this weight class even more important as the contenders jockey for position.

1 - Johny Hendricks
Still in the number one spot is Mr. Hendricks, a man many believe should be in St-Pierre’s spot at the moment. But what’s done is done, and if and when GSP returns to active duty, “Bigg Rigg” will be there waiting for him. So what does Hendricks do the second time around? I guess we’ll be seeing him push the action even harder, knowing that he can go five rounds and that GSP’s strikes didn’t affect him the first time around.

2 - Carlos Condit
I can’t lie – if GSP decides to retire or take a hiatus from the sport, I would love to see a five round rematch for the title between Hendricks and “The Natural Born Killer.” Their first fight in March was a classic and one of the best of 2013, and if they did again, this time with two extra rounds, now that’s just spoiling us MMA fans. Of course, Condit first has some December business with the man at number eight on the top ten, Matt Brown.

3 - Robbie Lawler
The sentimental favorite on this list, Lawler’s upset win over Rory MacDonald last Saturday was his third victory of the year, and it skyrocketed him up seven places in the rankings. It was the kind of win that not only showed that Lawler is still a dangerous foe for anyone, but that he’s added enough new wrinkles to his game to be a tough out for anyone in the division. Not bad for an old-school vet.

4 - Rory MacDonald
Expected to be the heir apparent to the throne of his friend and training partner St-Pierre, Rory MacDonald fielded more questions about the possibility of fighting GSP should they both win at UFC 167 than queries about his opponent, Robbie Lawler. And while I don’t think MacDonald took Lawler lightly, he definitely didn’t have enough answers for the questions he was asked by “Ruthless” last Saturday night. It was a tough loss to be sure, but nothing a couple impressive wins can’t erase.

5 - Jake Ellenberger
As disappointing as MacDonald’s loss to Lawler was, so was Jake Ellenberger’s July defeat at the hands of MacDonald in July. Listless and unable to get his knockout punches off throughout the three rounder against the Canadian, Ellenberger will nonetheless get a chance to shake off that loss and get right back into the title picture when he headlines the first UFC event of 2014 in Singapore against the last man to hold the Strikeforce welterweight crown, Tarec Saffiedine.

6 - Demian Maia
Winner of three out of four welterweight fights thus far, former middleweight contender Demian Maia may have dropped a spot from number five to six this week, but he still remains ahead of the man who beat him by split decision in October, Jake Shields.

7 - Jake Shields
The former Strikeforce champion and UFC title challenger has quietly gone unbeaten in his last four bouts, with wins over Yoshihiro Akiyama, Tyron Woodley, and Demian Maia, but he still remains in the second tier of the top ten. Why? Probably because the grappling ace has yet to put together that defining UFC win. Once he does that, expect to see his stock rise considerably.

8 - Matt Brown
Before Robbie Lawler’s three fight UFC winning streak made him everyone’s favorite welterweight, it was Matt Brown turning heads left and right with his remarkable six fight hot streak that includes five wins by knockout. These days though, Brown isn’t the comeback kid; he’s a legit contender, and if he beats Carlos Condit next month, he may very well be the next in line for a shot at the belt.

9 - Martin Kampmann
There’s probably not a better fighter in the UFC with a 3-2 record in his last five than Martin Kampmann. And though he’ll have a hard climb back to the top five after back-to-back defeats against top contenders Hendricks and Condit, if anyone has the skill and determination to get there, it’s “The Hitman.”

10 - Nick Diaz
Ah, Nick Diaz, MMA’s mystery man, but one who still remains in the top ten despite claims that he has retired as an active fighter. Will 2014 be the year we see Stockton’s finest back in the Octagon? Let’s hope so.