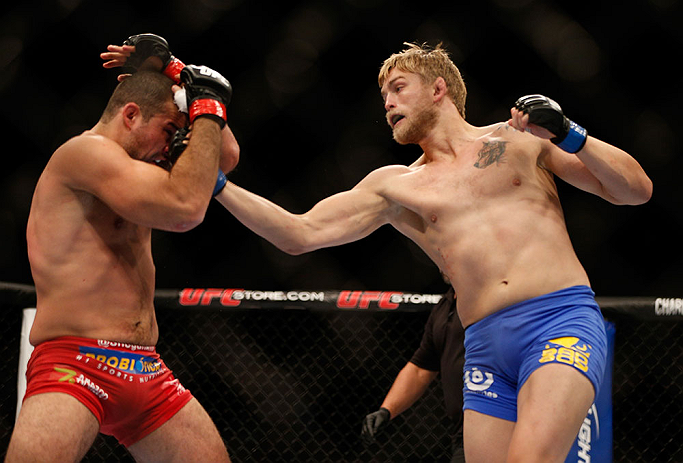 With several top light heavyweights, including champion Jon Jones either in action in April or having just been signed to future fights, this spring should be an interesting one for those at 205 pounds, making this the perfect time to break down the latest edition of the UFC Fighter Rankings.

The Champion: Jon Jones
After a tumultuous 2012 campaign, light heavyweight boss Jon Jones has gotten off to a more sedate start this year, with a coaching stint on The Ultimate Fighter 17 to be followed by an April bout with Chael Sonnen at UFC 159. With a win, Jones will step into the Octagon with Lyoto Machida once again, and from there, who knows what’s next for Jonny Bones.

1 - Lyoto Machida
No, his UFC 157 win over Dan Henderson wasn’t pretty, but with the three round decision under his belt, Machida can now focus on the future and a second chance at regaining his 205-pound title. April 27th will determine whether he faces Jon Jones or Chael Sonnen, and though both matches would be intriguing, you get the feeling that “The Dragon” would like to avenge his 2011 loss to Jones.

2 - Alexander Gustafsson
The next member of the 205-pound top ten to step up to the plate will be Sweden’s Alexander Gustafsson, who headlines April 6th’s UFC on FUEL TV event in his hometown against Gegard Mousasi. Strikeforce import Mousasi is a tough out for anyone, but with Gustafsson riding a six fight winning streak that includes back-to-back wins over Thiago Silva and Mauricio “Shogun” Rua, the confidence of “The Mauler” is likely to be at an all-time high. With a win, he won’t get a title shot, but he is likely to be just one win away.

3 - Dan Henderson
Hendo’s split decision loss to Machida in February wasn’t one for the former PRIDE two division champ’s time capsule, and you have to wonder if, at 42, age has caught up to him, but the competitiveness of the Machida bout and Henderson’s overall body of work has kept him high in the media’s rankings, and if he can defeat Rashad Evans in a pivotal crossroads bout at UFC 161 in June, he could be back in the title hunt again.

4 - Glover Teixeira
The breakout star of the division in 2012 thanks to decisive finishes of Kyle Kingsbury and Fabio Maldonado, Glover Teixeira showed no signs of slowing down in his January 2013 win over “Rampage” Jackson, setting up a May bout with Ryan Bader. But when Bader was forced out due to injury, Australia’s James Te Huna stepped in, and this one may end up to be even more explosive than the first matchup. If Teixeira wins, expect to see him move ever closer to a shot at UFC gold.

5 - Antonio Rogerio Nogueira
With injuries sidelining him for a good length of time and bad style matchups against wrestlers Jason Brilz, Ryan Bader, and Phil Davis keeping him from looking his best, Rogerio Nogueira hasn’t had the easiest time in the UFC. But with consecutive wins over Tito Ortiz and Rashad Evans and a high-profile rematch with Mauricio “Shogun” Rua in June, Nogueira just may emerge as the dark horse contender in the division by the end of the year.

6 - Mauricio Rua
After back-to-back wars with Dan Henderson and Brandon Vera, Mauricio “Shogun” Rua probably needed a) a nice long break, or b) an easy comeback fight. But Rua isn’t one for taking breaks, and the UFC isn’t the place for easy fights, so in December, the Brazilian returned and lost a decision to Alexander Gustafsson. In June, it’s back to the salt mines for “Shogun,” but this time he’ll meet an old acquaintance in Rogerio Nogueira, a man he teamed up with to produce one of the greatest fights in PRIDE history. It’s eight years later, but you get the feeling they can do it again.

7 - Rashad Evans
Once riding high and seemingly on his way back to regaining his title, Rashad Evans has now lost two straight, looking out of sorts in decision losses to Jon Jones and Rogerio Nogueira. At UFC 161 in June though, all sins will be forgiven should he defeat Dan Henderson, especially if he does it in the fashion of his biggest wins over the years. And with a name like Hendo under his belt, it will give Evans the motivation and momentum to make another title run.

8 - Phil Davis
With his two fight series with Wagner Prado done, and a proposed UFC 155 bout with Forrest Griffin scrapped, Phil Davis makes his return at UFC 159 next month against Vinny Magalhaes. It’s a dangerous fight for Davis against the jiu-jitsu ace, but also one that probably won’t move him up the ladder too much if he wins. That’s the kind of limbo Davis sits in at the moment, and he’ll hope to escape it with his next fight assuming he takes care of business against Magalhaes.

9 - Ryan Bader
With wins in three of his last four, including an impressive Submission of the Night win over Vladimir Matyushenko in January, the resilient Ryan Bader could have skyrocketed into title contention with a victory over number four ranked Glover Teixeira at UFC 160 in May. But a training camp injury scrapped Bader from the bout, leaving the former Ultimate Fighter winner to wait around for his next opportunity.

10 - Gegard Mousasi
On April 6th, UFC fans will get their first look at one of the international scene’s top light heavyweights in Gegard Mousasi. A former Strikeforce champion, Mousasi’s list of victims included names like Mark Hunt, Jacare Souza, Melvin Manhoef, and Hector Lombard. In other words, he’s the real deal and a real test for young gun Alexander Gustafsson. If Mousasi wins, you won’t see him at the number ten spot on this list on the following Monday.