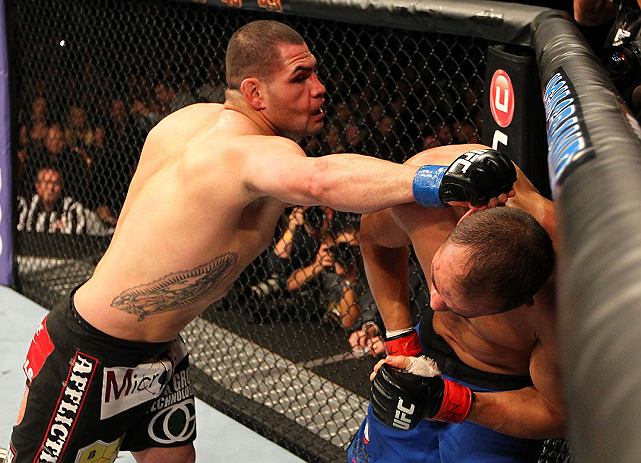 The first edition of the UFC Fighter Rankings hit the internet Monday evening, and, of course, there was plenty of debate about the media’s picks for the Octagon’s best of the best. Today, we’ll look at one of the weight classes that has recently been thrown into upheaval, not just with a changing of the guard at the top, but with a stunning upset last Saturday at UFC 156.

So, did the media get the top ten right?

The Champion – Cain Velasquez
When Cain Velasquez won the UFC heavyweight title the first time in 2010, his reign at the top was expected to be a lengthy one. Junior dos Santos’ right hand had other ideas, but after getting back to business with a knockout of Bigfoot Silva last May, Velasquez took the belt back from JDS at UFC 155 a little over a month ago. His dominant win over dos Santos makes it look like the second reign will be the long one many expected him to have the first time, leaving just one question: who’s next?

1 - Junior dos Santos
Despite his loss to Velasquez, JDS remains in the upper reaches of the division, rising to the number one spot after Overeem’s loss to Silva. Don’t expect an immediate title shot for “Cigano” though. A rubber match with Velasquez is likely one that will need to marinate a bit.

2 - Fabricio Werdum
A new man since returning to the Octagon, Fabricio Werdum has been ultra-impressive in decisioning Roy Nelson and knocking out Mike Russow. His possibility of getting a shot at the big man at the top will have to wait until Werdum’s stint as a coach on TUF Brazil 2 and his fight against counterpart Minotauro Nogueira take place though.

3 - Daniel Cormier
The wildcard of the group, unbeaten former Strikeforce star Daniel Cormier is a player in the UFC’s heavyweight division before even stepping foot in the Octagon. In April, he will get his first chance to make a major statement here when he battles former two-time champ Frank Mir. But with a victory, will he be willing to fight his teammate and friend Velasquez, and will Velasquez be willing to fight "DC"?

4 - Antonio Silva
Things didn’t look too bright for Antonio Silva’s UFC future when he was stopped by Velasquez at UFC 146, but with his subsequent knockouts of Travis Browne and Alistair Overeem, “Bigfoot” is a serious threat. Is it too soon for a Velasquez rematch though?

5 - Frank Mir
Winner of three of his last four, Mir remains a serious challenge for anyone in the division, but does he still have the right stuff to wear a championship belt once again? The Cormier fight should answer that question, and if the 33-year-old does pull off the win, Velasquez is a very interesting stylistic matchup.

6 - Alistair Overeem
Alistair Overeem’s fall from grace has been the talk of the town since last Saturday night, and for good reason. “The Reem” had a title shot locked up if he could beat Silva, but a ferocious third round assault left Overeem with his first loss since 2007. Luckily in the heavyweight division, one punch can change everything, and Overeem has the punch that can get him back on top sooner rather than later.

7 - Antonio Rodrigo Nogueira
The division’s ageless wonder, “Minotauro” Nogueira remains relevant in the division at 36 thanks to wins in two of his last three bouts over Brendan Schaub and Dave Herman. It could have even been three in a row if he was able to finish Mir when he had him hurt at UFC 140. If the former PRIDE and UFC champ can add Werdum to his list of victims later this year, the title picture will get a lot more interesting.

8 - Roy Nelson
Yes, Roy Nelson has lost big fights against JDS, Mir, and Werdum, but he has back-to-back knockouts of Dave Herman and Matt Mitrione, an April date with Cheick Kongo, and the type of one punch power that could make him a champion if he lands one of his bombs on the chin of Velasquez. When it comes to live underdogs, “Big Country” may be the liveliest.

9 - Stefan Struve
With four consecutive wins – all finishes – no one is better poised to make a move up the ranks in 2013 than Stefan Struve. Having apparently put his erratic performances of the past to rest, the “Skyscraper” has a pivotal bout with Mark Hunt coming up in Japan in March, and don’t be surprised to see him in the top five should he win that one.

10 - Shane Carwin
Out of action since June of 2011 due to injury, Shane Carwin is an odd pick for the number 10 spot here, simply because he’s been inactive and has no fight scheduled at the present time. But voters have rewarded his body of work with his placement in the top 10.