"The goal of the groundfighter is to win a fight without getting hit and
without hitting the opponent, but, you know, this is something
difficult get done today." - Rani Yahya 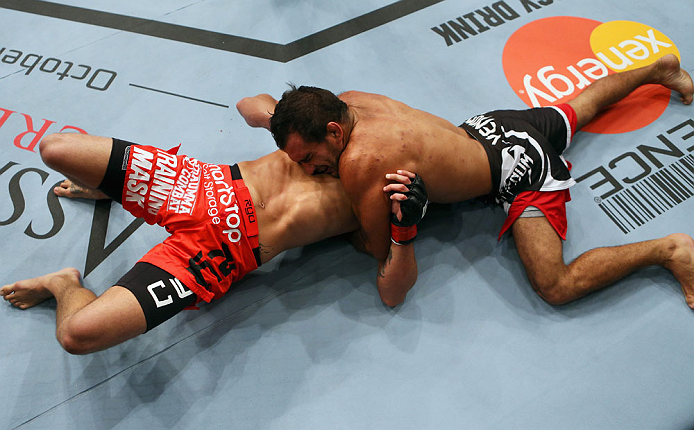 When you think of the top finishers in the UFC, the names of Anderson Silva, Jose Aldo, and Minotauro Nogueira often come to mind, but quietly creeping onto that list may be another Brazilian, featherweight Rani Yahya, who has ended 15 of his 17 pro wins by submission.

Last August, the Brasilia native introduced UFC fans to his finishing game for the first time, using a north/south choke to end Josh Grispi’s night in what was a pretty impressive statement as to the power of his ground attack.

“Fighting in the UFC is an honor and a dream,” said Yahya, “Especially at this moment when the sport is growing so much. It was also another dream to get a submission in the UFC and show the whole world the effective technique of jiu-jitsu.”

For WEC fans, Yahya’s ability to make virtually anyone tap out is no secret, as all four of his victories in the promotion (over Mark Hominick, Yoshiro Maeda, Eddie Wineland, and John Hosman) all came via submission, with three of them earning post-fight bonuses. His two pre-Grispi bouts in the UFC went the distance, as he decisioned Mike Brown and was outpointed by Chad Mendes in 2011, but the Grispi fight reintroduced him as a fighter who can end things quick if he gets his hands on you.

“The recognition from the people is getting better every day, and being recognized as a finisher is something that gave me the motivation to fight a long time ago,” he said. “Nowadays, people understand the importance of groundfighting, and submissions are exciting for anyone to watch.”

Getting such recognition is something the 28-year-old has fought long and hard for. A pro since 2002, Yahya has supplemented his mixed martial arts education with three world jiu-jitsu titles and recognition as the 2007 Abu Dhabi world champion. The black belt brought his knowledge of the art into MMA and though he’s had to adjust his mindset a bit over the years, the general principles still apply.

“Submissions can be impressive to show another kind of technique, another kind of strategy,” he said. “The goal of the groundfighter is to win a fight without getting hit and without hitting the opponent, but, you know, this is something difficult get done today.”

It will certainly by difficult against his opponent this Saturday, Mizuto Hirota, a hard-hitting newcomer who has eight knockouts in his 14 pro wins.

“Hirota is dangerous,” said Yahya. “He’s got knockout power, and he is good defending takedowns as well, but he has openings in his game.”

And that’s all a fighter like Yahya needs to pounce and finish. But there will be extenuating circumstances surrounding the bout that could affect the outcome, such as Yahya fighting in Japan, Hirota fighting at home, but also making his Octagon debut. When it comes to the first matter, Yahya is a veteran of fighting in Japan, having competed six times over the course of his career.

“Japan is awesome,” said Yahya. “It is one of the best places to fight, and people there love the fighters.”

Scratch that one. And even though Hirota’s possible first time jitters may negate his home Octagon advantage, Yahya doesn’t think nerves will be an issue for his opponent.

“Yes, the debut is always difficult, but we are expecting the best Mizuto Hirota,” he said, expecting to be the best Rani Yahya on fight night. If he’s on top of his game and gets another victory, he may just start entering the ranks of featherweight contenders, and that’s fine with him.

“A win always puts you closer for a title shot, but the goal is to accept the challenges that the UFC will put in front of you, step by step.”