Rani Yahya - One Dimensional No Longer

"My head is locked in on one thing, and my only focus is to win the fight." - Rani Yahya 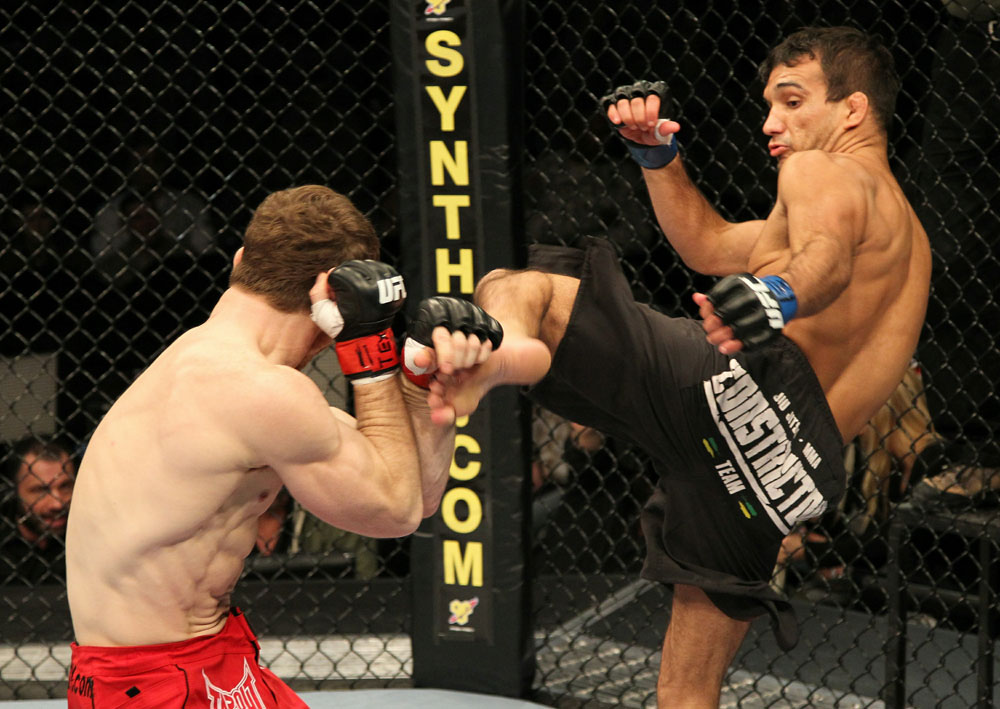 Brasilia’s Rani Yahya is a submission specialist; everybody knows it. Since the beginning of his career, the Constrictor Team product has been trying to showcase the excellent ground
skills taught to him by professor Ataide Junior, and Yahya's goal is always to finish
his opponents with joint locks or chokes when they hit the ground. And with 16 wins in 22 fights, 14 by submission, nobody ever doubted it.

Certainly his next opponent at UFC 133 in Philadelphia on August 6th - Chad "Money" Mendes - is aware of the amount of trouble that the Brazilian can cause on the top or even on the bottom once the fight goes to the mat.

With that said, the only uncertainty we have about the Brazilian Jiu-jitsu ace is his transitions throughout three different weight classes during his professional career. Yahya fought in Grand Prix tournaments in Brazil and Japan at lightweight, joined the WEC as a featherweight, dropped to 135 for a title opportunity in 2007 and stayed at bantamweight until his January debut in the UFC saw him go back to 145 pounds to face former WEC kingpin Mike Thomas Brown.

That’s a long and crazy trip, to say the least, and although Yahya is known as a dangerous groundfighter, his journeys from one division to another seemed to hold him back in his
career. Even though he could make the weight required, he never got to stabilize himself in any division once he reached the elite level.

However, with a new year, new goals, and the determination to remain a featherweight in the UFC, Yahya started his year nicely with a dominant decision victory over the aforementioned Brown and says everything in the past simply came down to the opportunities presented to him.

"In each moment of my career I had different good opportunities,” he said. “As a 155 pounder I fought a Hero's tournament in Japan, after that I was offered a title fight as a bantamweight in WEC [against Chase Beebe], but the perfect weight class for me is the current one I'm in, the
featherweight division."

As a 135-pound competitor, Yahya accumulated a 3-3 record in the WEC and was 1-0 at 145 in the organization. Yet he didn’t look right at bantamweight, at least not at the level that was expected of him.

"It’s hard to point out what exactly happened," he said. "Nowadays I believe I wasn't prepared to win those fights; I didn't have the experience necessary. So they were part of my destiny as a competitor. I needed to take them like lessons, and the defeats influenced my improvement mentally and physically."

The improvement process which Yahya is talking about involves more parts than those he detailed. A fighter climbing the ladder of experience needs to remove the one dimensional label and turn it into one of a complete MMA athlete. For Yahya, this looks like a contradiction from what he initially presented to the public, but ‘one trick pony’ isn't a title he wants to hold as he adds more weapons to his game without nullifying his prime technique – submissions.

"I train striking much more than submissions, but my natural skills on the ground develop themselves naturally," Yahya said. "I have fights where I come in with a striking game plan and the match goes to the ground. That fight against Brown is a good example. People comment that it is easy to avoid a tie up, but if it's not. Fighters spend a lot of energy trading shots on the feet and then end up clinching. The Octagon facilitates this because you can drag the guy against the fence at different moments."

During the fight, Brown tried to stay outside in order to punish his foe from long distance, but he was grabbed by a few tricky moves, and in third round he was taken down, traveling to a field where many don't want to be with the Brasilia native.

The former champion, who took the fight with just two weeks’ notice - replacing the injured Chan Sung Jung - survived a tough sequence of finishing attempts from the Brazilian in final stanza, surprising many. So how come he wasn’t able to finish Brown?

"Calm," he says. "Perhaps I didn't have enough calm to sub him; but anyway he defended the attempts very well. The important part was winning and fighting three rounds with a veteran
former champion like Brown."

Now taking on the undefeated Mendes, in the second fight for both in the UFC, Yahya is clear on what he brings to combat the Team Alpha Male prospect. If against Brown the calm wasn't present enough for him to score a submission, against Mendes Yahya intends to display every single lesson he learned during his WEC stint.

"Diet, dehydration and rehydration are a very important part of the game in today's fight scene, and you need to be very aware of it, so if a guy knows a bit more than his opponent, he's one step ahead." Yahya says. "The strategies for the fight are also important; I mean you
need to have a plan A, B, C, D and etc. In the beginning, I fought with only one plan, and when it didn't work I was lost. He [Mendes] can try to surprise me, but we have been training striking a lot as I continue the evolution in my technique and in my mind too."

For Mendes, who is close to a title challenge, the fight against Yahya is the roadblock standing in the way of his dream fight. On the other hand, the Brazilian fighter is ready to spoil Mendes' plans and if you look closely, with victories over two former WEC champions (Brown and Eddie Wineland) and the experience of a title fight in his pocket, this is not only a duel where he can frustrate his foe's wishes, but start his own road to the belt as well.

"I'm looking for it," he said. "But a lot of people have been talking about it [title contention], and I'm not letting it influence my mindset now. My head is locked in on one thing, and my only focus is to win the fight."