"I don’t care if he’s undefeated. He’s still the same fighter, still has that unique style, and that makes an interesting fight.” - Randy Couture 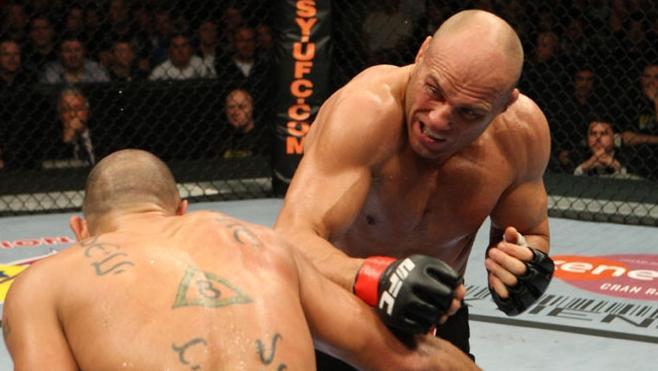 If this Saturday’s bout against Lyoto Machida is indeed the final one of Randy Couture’s Hall of Fame career, “The Natural” will be missed for many reasons. Some will recall his five UFC championships, others will point to his uncanny ability to nearly always find a way to upset the odds and pull off the miracle victory.

But for my money, the one thing that always separated Couture from the pack was his genius for breaking down opponents and finding the one weakness that would allow him to implement his gameplan and get his hand raised once again.

As a random example, look at this most recent win, a first round submission of future boxing Hall of Famer James “Lights Out” Toney. In the great scheme of things, this win will be remembered more for the boxing vs mixed martial arts nature of it than as a truly representative victory for Couture, who was a heavy favorite against an opponent who had never competed in an MMA bout before.

Toney did bring his two fists though, and with small gloves and fast hands, all it would take is one combination for the boxing great to turn things in his favor. Couture knew this, and he also knew that Toney was likely to be drilling his defenses against various takedowns. But there was one takedown he could almost guarantee that Toney wasn’t working on – a low single that Couture and his team decided that was going to be the easiest route to giving Mr. Toney a one-way trip to the mat.

“Obviously I came from Oklahoma State in wrestling and that low single was a staple in our college,” explained Couture. “John Smith made the technique very popular, he won six world titles with it and so it was part of our program. I certainly had to dig deep and dust that off (Laughs), and when I started shooting it, I was working with Ray Sefo and Gil Martinez, and they were like ‘that technique might work and it’s gonna be really hard to counter that with a knee or an uppercut or anything that a boxer might be trying. He knows you’re gonna shoot, he knows you’re gonna try and take him down, and he may be trying to drill some of these other counter tools for a good double leg. This low single is probably a good option for you.’”

Couture wasn’t completely convinced though, because while the move is effective if you can nail it, if you don’t, it’s easy for an opponent to escape and suddenly get the upper hand.

“I went back and forth,” he continues. “Obviously anyone who has good grappling skills or any kind of wrestling skills, especially barefoot, you can step right out of that low single. If you don’t get immediate pressure on that shin and knee and a guy doesn’t feel like he’s gonna fall down, he’ll step right out of that and you’re laying on your stomach basically in front of your opponent, which isn’t a great place to be, and that actually happened a few times in training against some guys that have some well-rounded skills, so I was like ‘damn, I don’t know if this technique is gonna work.’ But working with Ray and working with Gil and some of the more pure strikers that didn’t have any of that grappling or wrestling background, the technique seemed to work flawlessly. And I developed more and more confidence with it as time went on, and then it just really came together at the end and I just knew it was gonna work.”

And on fight night, Couture’s confidence amped up a few more notches when he looked at Toney standing across from him in the Octagon.

“Then the light went off when I walked out into the cage and saw that James was wearing those ankle braces, which was gonna give me a little bit of a grip on his foot to boot,” said Couture. “So I was sure it was gonna work, and thankfully it did.”

At 3:19 of the first round, Couture submitted Toney with an arm triangle choke after getting him to the mat with the low single he had practiced throughout training camp. Again, it won’t go down with his tremendous wins over Chuck Liddell, Tito Ortiz and Tim Sylvia, or his classic wars with Pedro Rizzo and “Minotauro” Nogueira, but it’s a prime example of what has made Couture a legend of the sport. It’s not brawn, one punch power, or slick submissions; it’s the ability to pick apart opponents and out think them.

So when Machida, a young man from Brazil with a crafty and extremely unorthodox karate-based style, entered the UFC in 2007, Couture was a very interested observer, one hoping to one day test his fists and wits against “The Dragon.” On Saturday, he gets his chance, and he couldn’t be happier.

“He’s certainly an enigma,” said Couture of Machida. “He’s got a very complex, interesting style, he seems to cause a lot of guys trouble, he’s hard to get a bead on and I see him as a challenge. It’s been a lot of fun training and formulating a gameplan and figuring out what tools to sharpen and use against this guy. It’s been a cool camp.”

But has the idea of deciphering Machida lost any of its luster considering that the former UFC light heavyweight champion is on a two fight losing skid, with defeats coming against Mauricio “Shogun” Rua and Quinton “Rampage” Jackson?

“It didn’t change anything for me – that’s the fight game,” said Couture. “You get caught once in a while (against Rua), the decision with Rampage was controversial, and I actually thought that when I watched it in real time that Lyoto had won the fight. Now going back and studying that fight, I see how the judges came to the decision they came to and I thought Rampage did a much better job watching it again and slowing it down and seeing what was happening. But none of that really mattered to me; it was still about that style and that same guy is still stepping out there and fighting. You’re not gonna win every fight. I don’t care if he’s undefeated. He’s still the same fighter, still has that unique style, and that makes an interesting fight.”

And if anyone knows about refusing to be defined by your record, it’s Couture. He’s a fighter who will win no beauty contests with his 19-10 slate, but when you consider that he’s fought a top shelf level of competition almost from Day One, it explains a lot. And even when he has fallen short of victory, he always showed up to fight, earning him a legion of fans over the years.

“I would have to say that the fans that I have seem to like me whether I win or lose,” said Couture. “They seem to relate to me because of the way I take the losses and the wins. You have to take them in stride and use them to motivate you and you become a better fighter and a better person because of them. I’ve always tried to be humble in winning and in defeat and I think the fans appreciate that and I think that’s why it never seems to sway that much whether I won the fight or lost the fight – I gave it everything I had, I trained as hard as I could, I put it all out there in the cage and I could walk away and live with whatever the result was.”

More often than not, that result was Couture walking out of the Octagon with his hand raised, and what has amazed everyone is that at 47 years old, he’s still doing it. He enters Saturday’s bout with a three fight winning streak, and most see the Machida bout as one of the most competitive and hard to pick matches on the UFC 129 card. As he said after beating Tim Sylvia for his third heavyweight title at UFC 68 in 2007, “not bad for an old man.” But he’s not your typical 47 year old.

“I was fortunate that I was very, very active all through my thirties and competed in both wrestling and this sport of mixed martial arts at a high level with no real down time,” said Couture of his longevity. “I never let myself go or never had any hardcore injuries that kept me out for any extended period of time, and that allowed me to keep my conditioning and it becomes a big part of your life and lifestyle. So I wasn’t constantly trying to climb back into shape and I never really felt like I slowed down. I just kept motoring and kept going. And I try to take care of myself. I live a fairly simple and clean life, and it gets crazy at times with travel and stuff like that, but on the whole, I don’t do anything very extravagantly. I love being in the gym, and I think all those things contribute to the longevity that I’ve been able to sustain.”

But as the cliché goes, all good things must come to an end, and Couture, still healthy, still able to compete at the elite level, has decided that Saturday night’s bout will be his last. Don’t shed a tear for him though, as he rightfully believes that the only way to truly go out is when you’re at or near the top, and that’s where he stands right now, just days away from competing in front of 55,000 fans in Toronto’s Rogers Centre. Now that’s a going away party.

“At some point you have to figure out what you really want to do,” he said. “I want to go out on my terms. I don’t want to wait until I have that injury or that thing that forces me to do something else. I want to make it my decision. I’m getting a chance to do a lot more acting, I’m enjoying the clothing industry, and the supplements and the gym are doing terrific, so there are a lot of other things going on that take my time and energy elsewhere, but I’m having fun right now.”

And who can argue with that?