Randy Costa Fights In Memory Of A Fallen Friend And Hopes To Continue To Make Him Proud
By Thomas Gerbasi, on Twitter @tgerbasi • Dec. 10, 2021

“Bruce Buffer's about to announce my name,” said Randy Costa, just about to make his UFC debut against Brandon Davis in April 2019.

His coach, UFC veteran Joe Lauzon, wasn’t as excited about that part of what was going to take place in the next half-hour.

Costa lost that fight to Davis, getting submitted in the second round. Over two-and-a-half years later, “The Zohan” learned his lesson, and after three more trips to the Octagon, two of which he won by knockouts, he’s settled in, zoned in, and all-in on making it to the top of the bantamweight division. “There's literally no difference,” he said when asked to compare jumping from the regional circuit to the big show with just four pro fights under his belt. “The lights are a little bit brighter; that's the only thing. Maybe my perception of that is because I'm hyper focused on the task at hand. I'm happy to be in the position that I am. That doesn't mean I'm complacent. That just means that I worked really hard to get to the point that I am right now, so it would be an insult to myself and all the work that I've done if I'm too focused on the things that don't matter.”

That means Costa isn’t interested in the fame, the glory, the Instagram likes or Twitter follows. When those things happen, it’s because he’s doing things right on fight night. If he doesn’t take care of business, then none of the other stuff matters.

Listen to the 27-year-old talk about the fight game, and it’s almost hard to believe that at one point, he was going to walk away from the sport after just three amateur fights.

The two members of the Lauzon MMA squad met when they were teenagers. Their girlfriends at the time were working together and each spoke about their boyfriend’s fighting ambitions. Both blew it off at first, but Costa and Carrier eventually hit it off and that bond grew tighter when they began training together with Lauzon. 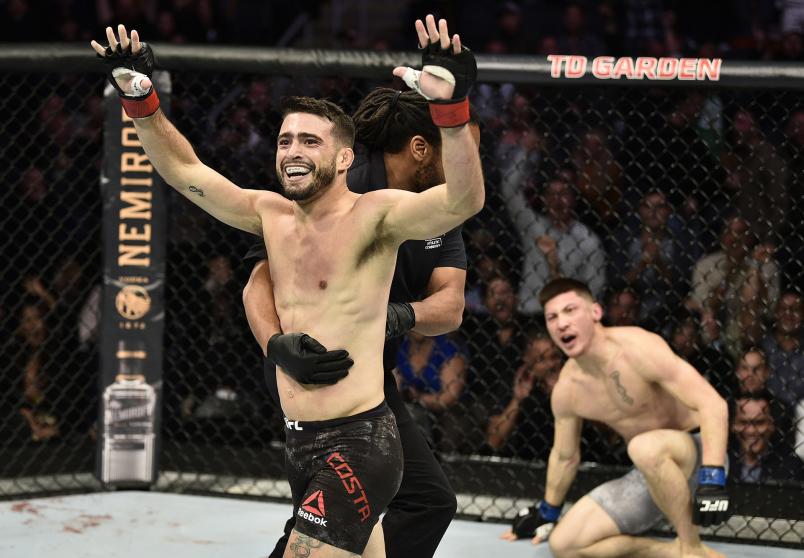 Randy Costa celebrates after his knockout victory over Boston Salmon in their bantamweight bout during the UFC Fight Night event at TD Garden on October 18, 2019 in Boston, Massachusetts. (Photo by Chris Unger/Zuffa LLC)

“It was cool to put a face to the name and we just became really good friends,” said Costa, who was on the fast track early.

“I banged out three amateur fights,” he recalled. “He (Carrier) had one amateur fight at that time and he was still developing. He didn't have an extensive martial arts background. He had a good kickboxing background, but he didn't have wrestling and jiu-jitsu and all those kinds of things, so he had to learn a little bit more before Lauzon would let him fight.”

After those amateur fights, Costa began what would turn into a four-year layoff. Carrier kept moving on his fighting dreams, and even in the midst of Costa cornering him, he encouraged his friend to return to active duty.

“He would always tell me, ‘Randy, you gotta fight,’” said Costa. “I promised him, ‘I'll get one more.’ I never had any intentions of fighting ever again, let alone professionally or anything like that. It just wasn't in the cards for me.”

Then on August 6, 2016, Costa, who was in Las Vegas at the time, got a phone call from UFC vet and teammate Joe Proctor.

Carrier was killed in a car accident on his way home from practice. He was just 21 years old.

“I didn't believe it,” said Costa. “That could have been me, on my way home from something that's gonna get me a step closer to my dream, then everything robbed from me.” 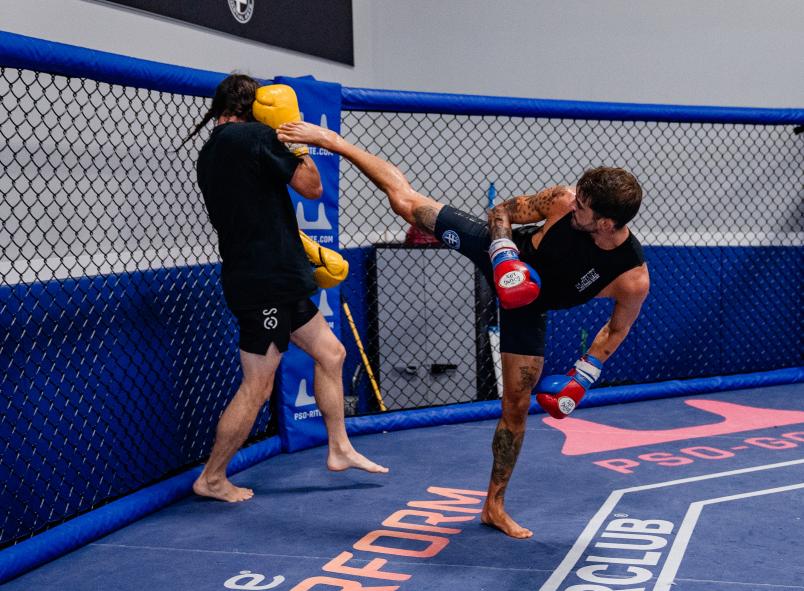 He returned home and the tight-knit fight community in New England mourned the loss of their friend. Now Costa had a dilemma.

“I'm stuck between a rock and a hard place,” he said. “My friend's gone, his goal was to get to the UFC, my goal was not to make it to the UFC, but I did tell him that I would get one professional fight at least. So that's what I did.”

Fighting for his friend, Costa made his pro debut on June 30, 2018, stopping Stacey Anderson in 46 seconds. Then he realized what he had been missing.

“I got one professional fight and then I got the itch again,” Costa said. “If this was his goal, I'm starting to like it again. Let's see what we can do with this. I had a fight in June, August, and November and January, and after the January fight, I found myself in the UFC. It was nine months from my first pro fight to my UFC debut, and all that time I brought Devin with me because if he hadn't passed away, then we certainly wouldn't be having this conversation. I may have taken a fight eventually, but I wouldn't have been all-in the way I am right now.”

When Costa says he brings Devin with him, he isn’t talking about having the memory of his friend in his heart, though that’s true, too.  What Costa does is literally bring Carrier’s picture with him into every fight, and after Devin’s parents gave him a necklace with some of their son’s ashes in it, the young man taken too soon is going into the Octagon with his friend every time Costa makes the walk.

“He really is always with me,” said Costa, whose reasoning for all of this is clear. “It's important for me to take him with me during it because it was his dream and he's the reason why I pursued it. I can bring recognition to his name using my platform. It's fighting for something bigger than myself. It's cool to take him with me because I know that if the roles were reversed, he would want me there with him. It's not all about me, it's bigger than me. I have the luxury of being able to chase this dream. His dream got robbed from him, so it's cool that I can make him a part of mine.” 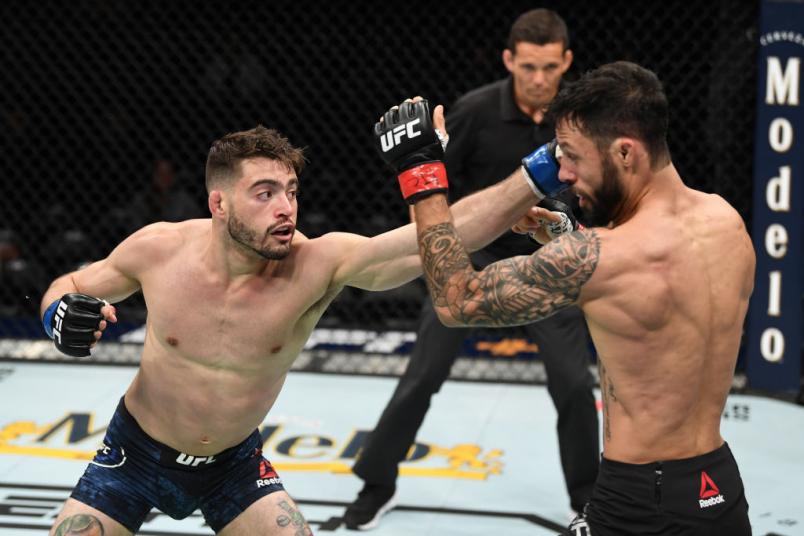 That’s a fighter (and man) with his priorities straight. So when he suffered his second UFC loss to Adrian Yanez in July, Costa took it as a learning lesson and not the end of the world. He gets to fight again – this weekend, in fact, against Tony Kelley. He doesn’t forget that.

“Right after a fight, give yourself 24 hours to feel bad about yourself and then it's get back to work and figure things out,” he said. “But with this fight in particular, I feel like even though I lost the fight, there's still a lot of good things that came out of it. People often forget that I've only had eight pro fights and four of them in the UFC. This next fight is my fifth UFC fight, and that will be more than half of my professional career, and I'll still be under ten fights. So I'm really new in this game and Adrian had a lot more experience that I did, and I feel like I showed that I can hang with these guys and I have something to offer out there. I just didn't put it together.”

Costa did put it together in the first round as he surprised the favored Yanez, but in the second, the Texan roared back and closed the show. Costa has no excuses. It wasn’t his night.

“I made a mistake, and I'm not gonna say experience lost me the fight, but the inexperience definitely played into the decisions that I was making in the fight,” he said. “I'm happy that I lost that way this early in my career because there were a lot of good things that came out of that fight, aside from losing, so it's just taking the good with the bad. I don't want to sit and dwell on it. I know Adrian's a legit fighter; he's gonna be a contender, it's not like I lost to a bum, and there was a lot more good than there was bad. The fight was going awesome until it wasn't, and that's just the way this fight game is. I've been on the good side of the highlight reel before, and this time I'm on the bad side of the highlight reel.”

When Costa’s 24 hours were up, it was back to the Sanford MMA gym in his adopted home state of Florida, and this weekend, he gets to show what he’s learned in the last few months against Louisiana’s Kelley.

Knowing the tendency of the New England MMA contingent to give each other a hard time, I ask him what Carrier would have said about his buddy and all this UFC stuff.

“He’d probably say, ‘You should have done it sooner.’ But the biggest thing is that I know that he would have been proud. You can say a lot of things about what you wish from people, but you can't really wish things from people that aren't here anymore. But the one thing you can wish and hope and have faith in is that you're making somebody proud.”