NEWARK, NJ - Welterweight prospect Randy Brown was discovered on the new series “Dana White: Looking for a Fight,” and he certainly got a fight out of Canada’s Matt Dwyer, going the distance for the first time en route to a hard-fought three-round unanimous decision victory in UFC Fight Night action at Prudential Center on Saturday.

The first round was a competitive one, with Brown showing little evidence of the first-time UFC jitters. Kelowna’s Brown was the busier of the two though, with his leg kicks setting up the occasional right hand, a couple of them hitting the mark over the course of the frame.

The first clinch of the fight took place early in round two, the two locking up against the fence, where they jockeyed for position before referee Lim Kerrigan restarted the action. After breaking, Brown ripped off his best combination of the fight. Dwyer recovered and the fighters proceeded to trade the advantage at close range, Brown eventually throwing the Canadian to the mat with two minutes left. The two rose quickly though, and Dwyer returned the favor with a takedown of his own.

Going on the attack to start round three, Brown jarred Dwyer and had him on the defensive, but as the bout strayed to the mat, Dwyer wound up in the dominant position. “Rudeboy” kept working though, eventually taking his foe’s back as they rose. After breaking, Dwyer emerged with a cut under his left eye, and the confident Brown was surging as the seconds ticked away, landing two hard knees before the two tumbled to the mat again, the action stalling until the final horn. 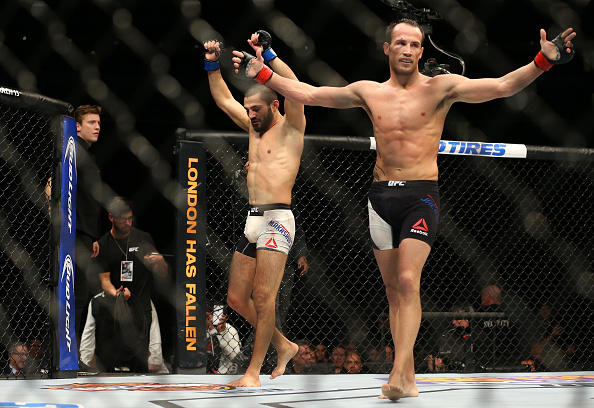 A point deduction in the final round kept featherweight Levan Makashvili from securing his second UFC victory, allowing Damon Jackson to salvage a three-round majority draw.

There wasn’t much significant action in the opening frame, but Jackson did his best to produce it in terms of being the aggressor and bulling Makashvili into the fence. In the process though, there were more stalemates than exchanges.

Makashvili (10-2-1) found more daylight in the second round, and when the two were separated, the Georgia native was able to be successful with his strikes. But more often than not, it was Jackson pinning him to the fence, yet he was unable to get his foe down or score with anything notable.

After more stalled action to start the third, Makashvili drew a roar from the crowd 90 seconds in by scoring a takedown and then landing with some strikes once the two stood up. Then again, with two minutes to go, “The Hornet” got a second takedown. As the fighters rose, Makashvili landed an illegal knee on the downed Jackson (9-1-1, 1 NC), bringing a momentary stop to the bout. When it resumed, Jackson then caught an inadvertent poke in the eye, halting the bout again. This time, Makashvili was docked a point, and it ultimately cost him the bout. 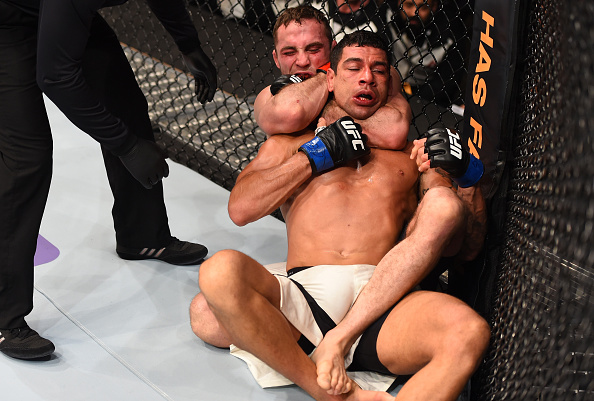 In the lightweight opener, Tony Martin bounced back from a loss to Leonardo Santos by submitting Santos’ teammate, Octagon newcomer Felipe Olivieri, in the third round.

When allowed to have space in the opening frame, Olivieri was able to control the action thanks to leg kicks that produced two flash knockdowns. Yet much of the round was spent with Martin – who scored one takedown in the round - smothering the Brazilian against the fence.

The low kicks from Olivieri kept coming in round two, and while Martin waved him in for more, each shot was scoring and bruising up the Boston product’s leg. Martin eventually got busy with his hands, each landed shot making him more confident, especially when he cut his foe over the left eye, putting Olivieri on the defensive. With 30 seconds left, Martin’s attack staggered Olivieri, who sought refuge in a clinch that last to the end of the round.

Olivieri got his bearings back early in the final round, with Martin responding by scoring a takedown. While there, Martin quickly went for the finish and got it, sinking in a rear naked choke that produced a tap out at the 3:02 mark.