For The First Time In His Career, Randy Brown's Father Will Be Able To Watch Him Compete At UFC Fight Night: Dern vs Rodriguez
By Maddyn Johnstone-Thomas • Oct. 8, 2021

This weekend marks the first time Randy Brown’s dad will be able to watch his son fight. While it won’t be in the UFC APEX in Las Vegas, the experience will be something that they both won’t forget, and “Rudeboy” is ready to put on a performance.

“My dad has been incarcerated since I was three years old, and he’s never been able to watch any of my fights,” Brown said. “(He is) over in Lewisburg, Pennsylvania. What was cool is that every time I fight, they can listen, they leave the TV on and the whole cell block can hear it. Whenever I win they all kick the door in celebration so that’s kind of cool. This time they’re letting everyone out and they’re having a late night so they can watch. I’m happy and I’m proud of that.”

Brown does have plenty to be happy and proud about. Five years into his UFC career, the welterweight has earned wins in six of his last nine fights, with his latest victory coming against Alex Oliveira. He won in outstanding fashion, submitting the veteran via rear naked choke at 2:50 of the first round.

The win was important for Brown to show his continued growth after he suffered a knockout loss to Vicente Luque.

He’ll put it all out there once again this weekend at UFC Fight Night: Dern vs Rodriguez when he faces Jared Gooden. When they step into the Octagon, Brown will have a three-inch height advantage, as well as a longer leg reach.

Gooden makes his fourth walk to the Octagon on Saturday after securing his first win in the Octagon back in July. The two competitors share a combined 14 wins by knockout and 11 victories by submission.

Brown’s approach and mindset stays the same as he heads into a fight. It doesn’t matter who he is facing.

“Everyone’s dangerous,” Brown said. “To get to this level, everyone put in a good amount of work. They’re skilled. I’m sure he is a champion, elsewhere, in a different promotion. We’re all champions that were just pulled into the UFC. With him, it’s the same approach. I’m treating it as if I am getting ready to fight the champion.”

The 31-year-old isn’t far from making a crack into the Top 15, a position he isn’t unfamiliar with. When he looks at the next steps of his career, he envisions himself making that run. 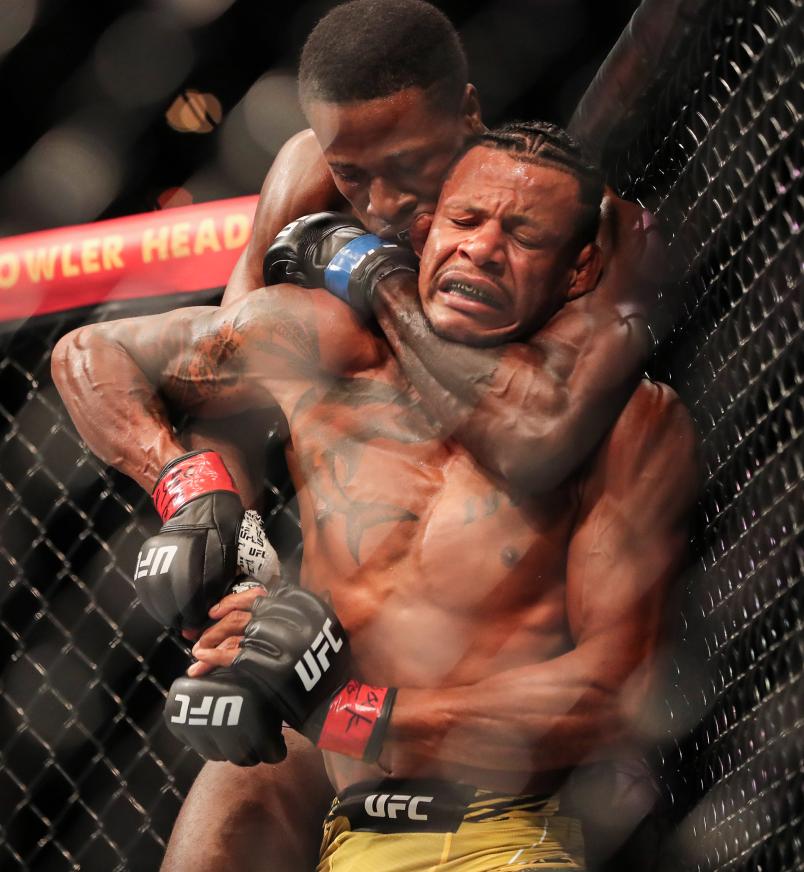 Randy Brown of Jamiaica forces Alex Oliveira of Brazil to tap out during UFC 261 at VyStar Veterans Memorial Arena on April 24, 2021 in Jacksonville, Florida. (Photo by Alex Menendez/Getty Images)

“Goals for 2022 are making a crack at that Top 15 again,” Brown said. “I had an opportunity one time, I fell short. Next time, I promise I will not fall short. Breaking into the Top 15 means a lot to me. Next year is going to be a big year and this fight, right here, is going to be a big step.”

For Brown, a win on Saturday puts him one step closer to accomplishing his dreams and securing another chapter in the legacy he is creating. The New Yorker will step into the Octagon knowing that his biggest supporter is watching from afar.

It will surely be a moment both Brown and his father will never forget, and a win will only make it sweeter.