Randy Brown Is Always Ready For A Surprise

Fighting in Brazil for the first time, Randy Brown knows a win in Sao Paulo could lead to a big opportunity.
By Zac Pacleb, on Twitter: @ZacPacleb • Nov. 14, 2019

As far as Randy Brown is letting on, he’s not entirely sure what he’s getting into when he faces Brazilian Warlley Alves in Sao Paulo this weekend.

“Is it enemy territory? I don’t know,” Brown said. “I I know Brazil can be kind of hostile sometimes, but I don’t know what to expect. I guess we’re going to go in there and find out.”

That mentality tracks with the lessons Brown learned over the course of his UFC career thus far. More than anything, Brown likes to keep things grounded so he can stay flexible with whatever situation a fight might present.

“For me, I like to simplify things,” Brown said. “I kind of just focus on getting better. The surprises come with anything that can happen in there. That’s what’s maybe my biggest surprise, thinking that you’re one place, but then the fight happens. Like my coach always says, ‘It’s not what you expect it to be. It just is what it is.’ That’s just that. You’re not always in control as much as you think you are.”

Going with the flow helped Brown secure a TKO win over Bryan Barberena, which is no small feat. Barberena had never lost via knockout until Vicente Luque became the first to do it in their February bout. Brown became the second, bouncing back from a knockout loss to Niko Price to halt “Bam Bam” in the third round.

Brown said that achievement didn’t do all too much for his confidence because, in his words, it is “always up.” If anything, it provided some reassurance that “everything is coming together” for the 29-year-old.

“I’m constantly learning, constantly growing,” Brown said. “My last fight, there’s always takeaways. There’s positives and negatives, but you learn a lot. On the technical end of things, you learn a lot, but more so I just go in, have fun and be myself and do what I do.”

Against Alves, Brown feels this bout is a critical one for him and believes this is an opportunity to springboard him into a “big opportunity” afterward. He admitted he has a name in mind, but wouldn’t go as far as to divulge whom he is thinking about.

That’s not to say he is looking past Alves, whom Brown calls a “solid up and comer.” 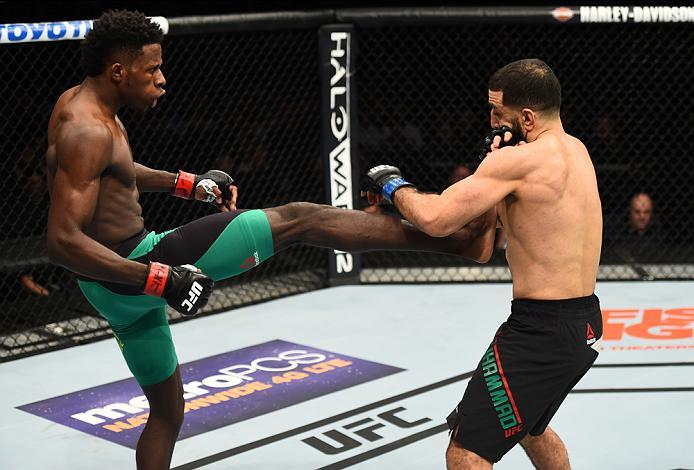 “I came all the way out here to do a job,” Brown said. “Dude is tough, aggressive, formidable, but I believe that I’m head and shoulders above.”

Brown hasn’t secured back-to-back wins since late 2016 and is 2-2 in his last four fights, but he thinks he has done the mental and technical work in order to find consistency in the Octagon. Whether that happens is always up in the air with any fighter, but Brown carries a relaxed confidence that makes it feel like he knows exactly how everything is going to go down in Sao Paulo.

“On Saturday night, I get it done,” he said. “I absolutely get it done.”