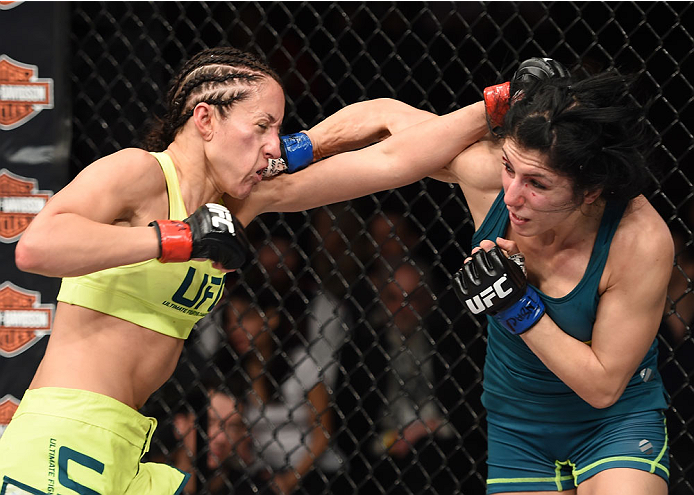 Randa Markos’ hectic life hasn’t gotten any less hectic since her first UFC fight against Jessica Penne last December, but when you’re in the eye of the (Quiet) storm like she is, you take little victories anywhere you can. So going from full-time to part-time in the pharmacy she works in back in Ontario helps, as does the fact that as she prepares for her UFC 186 bout against Ultimate Fighter teammate Aisling Daly on Saturday, she does so without any drama swirling around her.

“I’m so happy that all that stuff is kind of behind us now and I just have to worry about training and fighting and not having to face the person on TV to talk about what happened on the show,” Markos said, referring to the constant focus on who hated who and why during season 20 of TUF. “It’s so much more relaxing and so much more comforting to know that that stuff’s behind me and I can just focus on what matters now and not be distracted by all that other stuff. It just makes everything more difficult and it was a really negative feeling all the time when I was preparing for the last fight and even being on the show. It was a negative environment all the time and I don’t like that at all.”

Markos didn’t have any heat with her December opponent, Jessica Penne, but in the lead-up to the finale event in Las Vegas, all the TUF 20 competitors had to deal with the same questions while being forced to relive all the rivalries and bad blood fostered during the six weeks of taping the reality show. As for Windsor’s Markos, she just wanted to fight.

And now she can.

That’s not to say she didn’t against Penne, as the two waged an exciting back-and-forth bout won by Penne via split decision. When it was all over, the two also picked up Fight of the Night bonus checks, and Markos went right back to the gym in a quest to sew up any holes in her game.

“I’ve been training since my last fight,” she said. “I was really disappointed in how I did and I’ve been determined to get better ever since and I never stopped, so I’m ready for this fight.”

This fight with Daly came about late in the UFC 186 game, with the removal of TJ Dillashaw’s bantamweight title defense against Renan Barao due to injury and an injury to Daly’s opponent, Claudia Gadelha, on the UFC Fight Night card in Krakow creating a perfect storm for the “Quiet Storm” to get back in the Octagon. And though the two trained together as members of Team Pettis on TUF, Markos is not worried about the Ireland native knowing her moves and she is not expecting the same fighter either.

“I don’t expect her to be the same fighter as she was in her last fight, and I hope she doesn’t expect me to be the same fighter as I was in my last fight,” Markos said. “Everybody improves, and for me personally, every time I fight I like to take my flaws and I try to fix them so I become a little bit different than before. And when it comes to being friends with her in the house, I respect her as a person and as a fighter, but we all knew going into the house that we would eventually fight each other, so that doesn’t bother me at all.”

At the moment, Markos is the higher-ranked contender at 115 pounds, sitting at the number six spot while Daly checks in at number ten. Yet given Daly’s impressive opening UFC win over Alex Chambers and her (since scrapped) spot against the highly-touted Gadelha, a victory over “Ais the Bash” could propel Markos into the title picture in a wide open division. But the 29-year-old isn’t looking at this fight in that way.

“I just like to take it one fight at a time,” she said. “I like to focus on this and then whatever happens after this, it will come. I have no control over anything but how I’m going to do in this next fight. There are a lot of other girls that have a better ranking than I do and there’s a whole bunch of girls in line, so who knows who’s next. We’ve just got to focus on what’s going on right now, and I don’t like to clutter my head with everything else.”

What she doesn’t hesitate to reflect on is how impressed she was with new champion Joanna Jedrzejczyk, who dethroned Carla Esparza last month.

“This girl is well-rounded, she’s got some great hands, great techniques, and she beat a really good wrestler and made it look easy,” Markos said of Jedrzejczyk. “So she sets the bar a lot higher, and it lit a fire underneath me where I said I’ve gotta work harder. It made me even more motivated than before just because of the way she fought and the way she was so determined – ‘I don’t care who’s got the belt, I’m gonna get it.’ That just makes you more motivated watching her. It was a great fight, she’s an awesome athlete, and one day hopefully I’ll fight her.”

You get the feeling she will, maybe even sooner than she thinks. But it’s just one step at a time for Markos, and the next one is a homecoming in Canada that will feel like a championship bout for her.

“I’ve had so much great, amazing support from my country since I fought in the house,” she said. “I didn’t know what to expect going into The Ultimate Fighter; I just knew that I was the only Canadian and I wanted to make Canada proud. So now to be able to fight in front of everyone in my own country, it’s going to be crazy. And I’m hoping that everything works out and I make everybody proud. I worked really hard to get here, and with the support of everyone, it makes me more motivated and makes me want this even more.”