Randa Markos Knows She Needs To Defeat Luana Pinheiro At UFC Fight Night: Reyes Vs. Prochazka And She's Prepared To Do Whatever It Takes To Win.
By Gavin Porter, on Twitter: @PorterUFCnews • Apr. 29, 2021

Randa Markos has never been the type to raise her voice. Since 2014, “Quiet Storm” has been a mainstay in the UFC’s strawweight division, notching 16 appearances inside the Octagon and earning a reputation as a quiet, yet fierce, competitor.

But the 35-year-old Iraqi-born fighter heads into her record tying 17th strawweight bout with her back against the wall.

Three losses in a row forced the typically quiet Markos to speak up, and to make some big-time changes in her life. Markos moved from her home in Canada to Texas in order to join the Travis Lutter MMA team and identify the issues that led to her defeats.

Despite the fact that Markos knows she can’t afford a fourth consecutive setback, she isn’t feeling pressure; she’s just focused on putting her heart on the line.

Markos’ competitive fire has never burned brighter. She feels confident that the work she’s put in with her new team will make all the difference when she faces Luana Pinheiro at UFC Fight Night: Reyes Vs. Prochazka on Saturday.

“I’ve been enjoying the process and I feel like things have been changing for the better. I feel better when I’m training and pushing myself to what I should have been doing. I keep telling myself that I wish I had been doing this earlier, I wish I was doing this last year. Having that feeling, I know I’m in the right place and I’m at the right point of my career,” Markos said. “It’s been a rough three months. I’ve sacrificed a lot for this. Because I want this so bad, I don’t think anybody wants it as much as I do, and as much as I feel I’m trying to hold it back and stuff, I’m super excited for Saturday.”

UFC middleweight Kevin Holland has been impressed with Markos and has seen her really shine since joining him at Travis Lutter MMA. He has seen her push herself in training and has inspired others in the gym to work harder than ever.

“Randa is a true leader, motivator and team player. I honestly feel like her being on the team has lifted the whole team,” Holland said of his new teammate. “I’m glad she’s giving us an opportunity to be a part of her journey.” 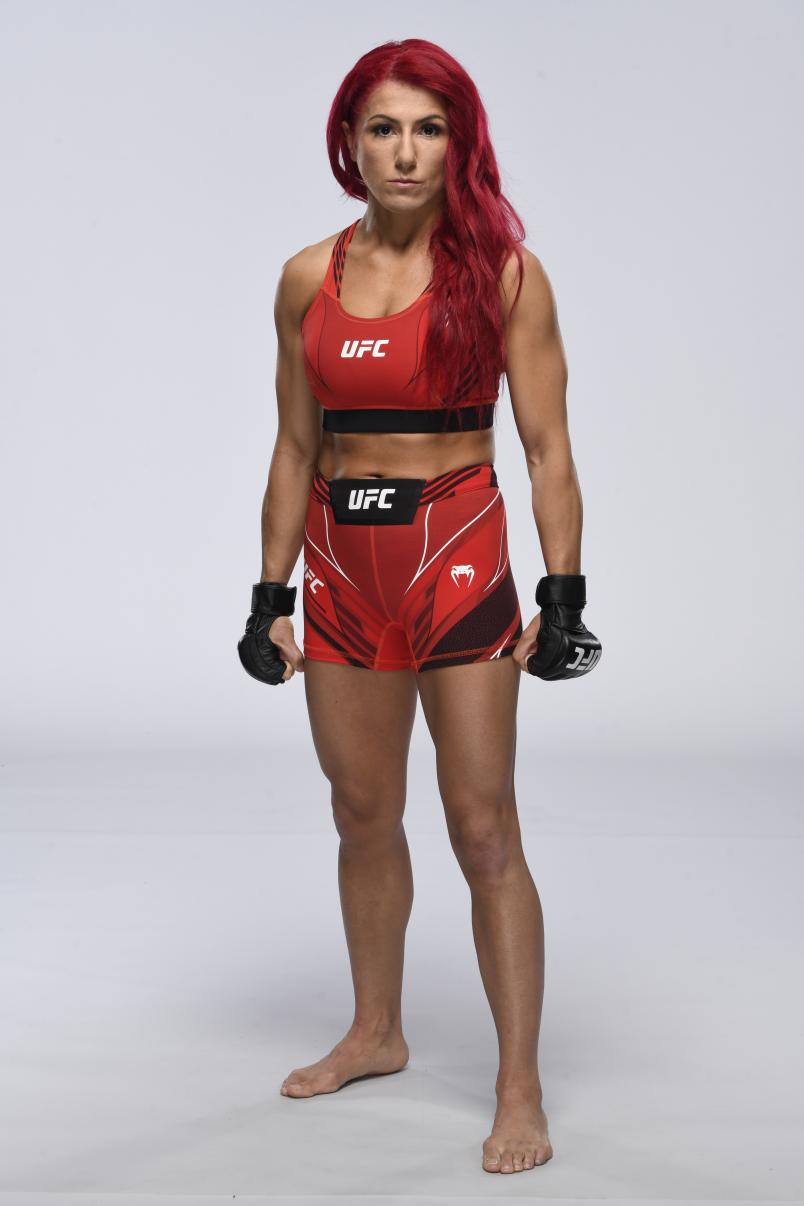 Randa Markos poses for a portrait during a UFC photo session on April 28, 2021 in Las Vegas, Nevada. (Photo by Mike Roach/Zuffa LLC)

All that’s left for Markos to do is make that walk to the Octagon inside the UFC APEX and lay it all on the line. And that’s going to be the easy part. At times, Markos has concerned herself with what her opponent is going through and has struggled to find her confidence. Not anymore. Now it’s all business and she’s confident in the sacrifices and effort that she’s put into her training camp for Pinheiro.

“I never saw myself [having three losses in a row] and I know what I’m capable of and last year I didn’t show any of it. I honestly don’t feel that much pressure because it’s almost like no one is expecting anything from me, especially after watching my last year,” Markos said. “I just feel excited to do what I’ve been working on and I feel like I’ve gained a lot of knowledge in the last three months and I’m excited to put it to work.

“I’m sure she’s hungry, but I don’t give a s*** what she is. I don’t really care too much about what she feels…She’s aggressive, she likes to come forward and she likes to throw, but it’s nothing that I haven’t seen before. I’ve fought everybody. It’s going to be a tough fight because we are both aggressive and that’s where it’s going to be exciting.”

This renewed version of “Quiet Storm” is clearly looking to make plenty of noise against Pinheiro.