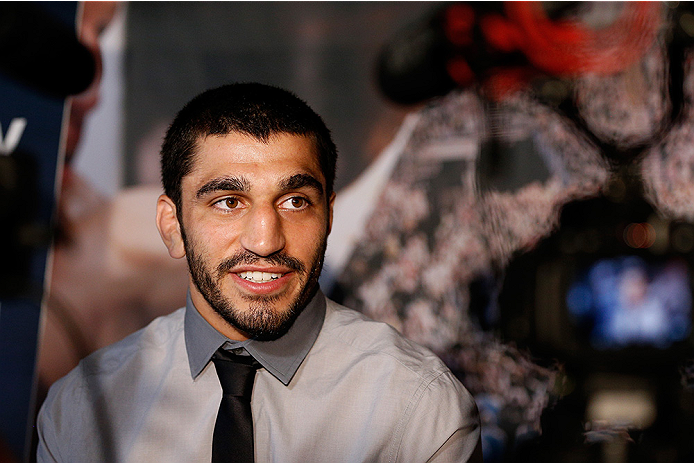 After a switch in training camps to Team Empower in San Francisco and two impressive wins over Justin Edwards and Beneil Dariush, UFC lightweight Ramsey Nijem has apparently turned the corner in his promising, but previously erratic, career.

And he likes life on the other side of the prospect line.

“I’ve always believed that I could be a champion, and I’m finally starting to actually believe it,” he laughs. “You always kind of believe it in the back of your mind, but to actually put it all out there is different. So it feels good that a lot of the hard work is paying off, and I think it has a lot to do with being a little bit older and a little bit smarter.”

He’s not “Stripper Ramsey” anymore, the jokester from season 13 of The Ultimate Fighter. Instead, he’s 26 on a winning streak, and as he approaches a UFC 177 main card matchup against Diego Ferreira, he’s approaching fighting not as a fun way to keep busy, but as a career.

“I really do believe in myself a hundred percent and I really do think I can be the best ‘55er in the world, and I take that mentality in,” Nijem said. “It’s not like going out and let’s just fight, and it’s fun and we’ll see what happens anymore. I love fighting and I enjoy it, but now it’s a little bit different. It’s a lot more like a job. It’s my career and I really have to make noise in order to get where I want to get. I have to be aggressive.”

He showed that aggression in his knockout of Dariush in April, an effort that earned him Performance of the Night honors in Abu Dhabi, a location that held special meaning for the Palestinian-American.

“It’s hard to describe,” Nijem said. “I was pretty much the hometown hero. The crowd was going crazy when I walked out, and it was a cool experience that I never had before in my career. I was just in the zone. I was thirsty and I was just ready to hurt somebody, and as soon as I smelled blood, I jumped on it. And that’s always been a double-edged sword for me. I got caught when I smelled blood and I finished a lot of fights that way, so it was really good and it was one of the best experiences of my life. I had a great time out there, I enjoyed the fight, I enjoyed fight week, I had no nerves, and I was just excited to be there.”

He’s just as excited for his bout with Ferreira, and not only because it’s in Sacramento and close to his San Francisco home, but because he’s the underdog to the Brazilian submission artist, a reality that sticks in Nijem’s craw a little.

“I think I made a big statement in my last fight, and in this fight I’ve got to solidify it,” he said. “I don’t want to be a teeter-totter, .500 fighter, win a few big ones, lose a couple, and just be okay. That’s not what I want to be; I want to be the best. So in this fight, I’m very motivated because I’m the underdog again. And it really fires me up every time I’m the underdog. So I want to go out there and solidify my place as one of the best ‘55ers in the world.”

Looking at the words on the screen doesn’t relay the intensity with which Nijem says that being the underdog fires him up. But it’s there, and he doesn’t like being on that end of the oddsmakers’ list in this one.

“No disrespect to my opponent, but he has one fight in the UFC,” Nijem said. “I have more fights in the UFC than he has, and I keep getting disrespected and put as the underdog, and that really fires me up and motivates me for this fight.”

Yeah, this isn’t the same Ramsey Nijem anymore, and that’s a good thing for him and for his fans. As for his opponents, they probably want to see the guy who showed up and was submitted by James Vick, not this fighter.

“I got caught in the (Myles) Jury fight, and after that fight, I didn’t recover mentally,” he admits. “Physically you recover, but a lot of people don’t realize the mental part. Walking out to that fight with Vick, I wasn’t there. I wasn’t there mentally and I wasn’t ready for that fight. No disrespect to him, but I’m a lot better fighter than he is, and there’s no reason I should have ever lost that fight. A lot of these fights I’ve lost, they’ve always been me winning the fight and me getting caught. But I wasn’t really mentally ready for it. I’ve had to learn how to fight in the UFC and learn a lot about myself. I think I’m starting to figure out who I am and where I belong.”

And once he figures that out, watch out.

A DIFFERENT KIND OF FIGHT

As Ramsey Nijem matures, he’s also becoming more aware of life outside of the fighting cocoon, so when the conflict in the Middle East between Palestine and Israel escalated again in recent months, it hit home to Nijem, who has family in the region and who also wants to promote a positive public image of the people there.

“It’s been really tough, and it’s just so sad,” he said when asked how he’s kept focused on his fight during this difficult time. “There are just so many kids and it’s such a young population in Gaza that doesn’t get the same opportunities as I do, so I really feel obligated to put everything into it. I had to focus my energy into the gym and just not talk about anything other than training when I’m in the gym. When I’m here, I’m here to represent a group of people that don’t have anyone else. There are not that many Palestinian professional athletes because they don’t have the opportunity.”

Nijem admits that even talking about the issues can garner him some pretty intense feedback that’s not always positive.

“It’s a heated topic, and it’s one way or another,” he said. “There’s so much that needs to be bridged in that gap, and it’s not that simple of an issue.”

His eventual goal is a simple one though, and one that other folks can take as an example.

“I just want to do something for the kids.”