Rampage - Taking Over the UFC

After his career in PRIDE ended, "Rampage" Jackson took the UFC by storm. Here's how he did it... 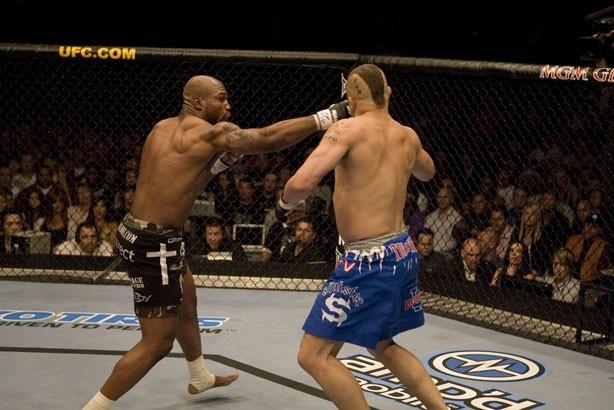 After an ultra-successful career in Japan’s PRIDE organization, expectations were high for Quinton “Rampage” Jackson’s UFC debut in 2007, and following a debut win over Marvin Eastman, the pride of Memphis, Tennessee was off and running. On May 28th, Jackson headlines UFC 130 against Matt Hamill, and with a victory, he may just add the fight to his list of defining UFC moments.

Chuck Liddell II – May 26, 2007 – UFC 71
Result – Jackson TKO1
A lot had changed in the almost four years since “Rampage” Jackson and Chuck Liddell first threw hands with each other. Liddell was the biggest name in mixed martial arts, PRIDE was no more, and Jackson was one win over Marvin Eastman into his UFC career. But despite the unprecedented media coverage for the bout and Liddell’s long reign as light heavyweight champion, Jackson still had his number, and after a right to the jaw dropped Liddell, ‘Rampage’ finished him off with ground strikes, and in less than two minutes, Quinton Jackson was a UFC champion.

Dan Henderson – September 8, 2007 – UFC 75
Result – Jackson W5
Sure, Jackson was funny, a charismatic representative of the sport, and he had the explosive style to give anyone fits. But if he got put on his back by a world-class wrestler like Dan Henderson, had to eat ‘Hendo’s concussive right hand, or was forced into a five round dogfight, how would the new 205-pound boss fare? Answer – he would pass every test with flying colors, as he showed new wrinkles to his ground game in a 25 minute battle with Henderson (the last PRIDE 205-pound champ) that saw him become the first fighter in history to unify the two belts via a hard-fought unanimous decision.

Forrest Griffin – July 5, 2008 – UFC 86
Result – Griffin W5
Take away the end result, which was a close, but unanimous, decision win for Griffin, and instead look at this fight not only as the best of 2008, but as one that showed Jackson’s championship heart as he survived some hellacious leg kicks and a one-sided second round beating to come back and close the gap over the final three rounds. When it was over, many felt that the champion had done enough to retain his title, but it was not to be, as Griffin was crowned the new king of the light heavies.

Wanderlei Silva III – December 27, 2008 – UFC 92
Result – Jackson KO1
After the loss to Griffin and out of the Octagon issues to deal with that included a break from longtime trainer Juanito Ibarra, Jackson could have fallen prey to the pressure against the only man to beat him twice. But instead, Jackson saw the Octagon as a sanctuary and delivered a stunning first round knockout over his old rival to get a sense of payback that he chased for years.

Rashad Evans – May 29, 2010 – UFC 114
Result – Evans W3
Matched up as coaches on season ten of The Ultimate Fighter, Jackson and former world champ Rashad Evans got in each other’s face early and often. Jackson’s stint as BA Baracus in the “A-Team” film kept things at a low boil, but in 2010 he got back to his day job. First order of business? Take care of Evans at UFC 114. The fight didn’t live up to the hype that surrounded it though, with Evans scoring a three round decision win despite Jackson having a few moments that almost saw him pull the fight out.

Lyoto Machida – November 20, 2010 – UFC 123
Result – Jackson W3
Yeah, it was close. Yeah, some people felt that Machida pulled out the win. But the bottom line is that Jackson got the W by sticking to a disciplined yet aggressive attack while finding some cracks in the foundation of the most difficult to decipher style in the sport today. It was a much needed victory for “Rampage”, and now as he looks forward to May 28th, he has a chance to string two wins together since he defeated Silva and Keith Jardine in 2008-09, making it a high stakes fight for him to say the least.