Read on for Rampage Jackson's most memorable PRIDE moments... 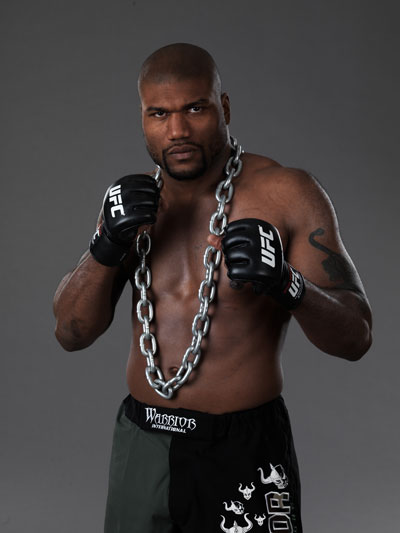 Memphis’ Quinton “Rampage” Jackson began his mixed martial arts career in the United States, but it was in Japan where he became a star. And while the former UFC light heavyweight champion is back home in the USA, where he will take on Glover Teixeira in the co-main event of UFC on FOX 6, here's a look back at his defining moments in the PRIDE organization.

Kazushi Sakuraba – July 29, 2001 – PRIDE 15
Result – Sakuraba Wsub1
With just 11 fights under his belt, Quinton Jackson was a raw but untested prospect when he was brought to Japan to face PRIDE superstar Kazushi Sakuraba in 2001. In the year leading up to the bout, Sakuraba had faced names like Wanderlei Silva, and Renzo and Ryan Gracie; Jackson was competing against guys like Kenneth Williams, Bryson Howvreck, and Rocko Henderson. It was a huge step up for ‘Rampage’ and he felt the pressure.

“I remember my stomach feeling like I swallowed a brick,” Jackson recalled in 2007. “I still, to this day, think that somebody poisoned my room service or something like that. I was happy that it was my biggest paycheck to date, but I know they brought me there to lose. They made me lose all this weight when Pride didn’t even have weight classes. I knew there was no way I could win. But I knew I couldn’t turn back and not fight. I said, ‘I’ve got to go out there and put on the best show possible and do my best so I could at least make a name for myself and Pride would have me back.’

Jackson would lose via submission to Sakuraba as expected, but what was surprising was the reaction of the crowd to the California resident, who began a love affair with the Japanese fans that would continue through his 17th and last PRIDE fight five years later.

Yuki Ishikawa – November 3, 2001 – PRIDE 17
Result – Jackson KO1
Less than four months after the loss to Sakuraba, Jackson – complete with his red, white, and blue trunks – was brought back to PRIDE to face debuting local fighter Yuki Ishikawa. Ishikawa was game, rushing Jackson at the bell, but the still raw “Rampage” showed off why he was about to become a major player in the MMA world as he overpowered his opponent with a nearly two-minute blitz that included a slam, a piledriver attempt, knees to the head, ground and pound, and a finishing standup flurry. It was Jackson’s first PRIDE win, and certainly not the last.

Kevin Randleman – March 16, 2003 – PRIDE 25
Result – Jackson TKO1
Though categorized as a wrestler, Jackson’s background on the mat paled in comparison to that of former UFC heavyweight champ Kevin Randleman, and Jackson knew it leading up to their 2003 fight. But Jackson wasn’t intimidated at all, and he showed it on March 16, 2003. In fact, Jackson even scored the first takedown on the Ohio State standout before a knee to the head followed by a 1-2 sent Randleman to the canvas a little less than seven minutes into the bout. A barrage of ground strikes finished the fight off seconds later, and Jackson had just scored the biggest win of his career.

Chuck Liddell I – November 9, 2003 – PRIDE Final Conflict 2003
Result – Jackson TKO2
By 2003, Jackson was firmly entrenched as one of PRIDE’s top fighters, a fact reinforced by a four bout string that saw him beat Igor Vovchanchyn, Kevin Randleman, Mikhail Illoukhine, and Murilo Bustamante in successive bouts. But the fight most MMA fans wanted to see at that point was one between PRIDE’s Wanderlei Silva and the UFC’s Chuck Liddell. Normally, there would be no chance of that happening, but UFC President Dana White agreed to send his fighter to Japan to compete in the organization’s 205-pound tournament, with the ideal outcome being a final fight between Liddell and Silva. Silva did his part, beating Hidehiko Yoshida. Liddell ran into a buzzsaw named Jackson, who took ‘The Iceman’s power shots, brushed them off and kept coming en route to a second round TKO. It was a win that not only solidified Jackson’s place among the worldwide elite, but it also got UFC fans curious about the man who just took out one of the Octagon’s finest.

Wanderlei Silva I – November 9, 2003 – PRIDE Final Conflict 2003
Result – Silva TKO1
For Jackson, there would be no basking in the glory of his win over Liddell, because he had to catch his breath and get right back into the ring at the Tokyo Dome for the final fight of the night – his showdown with Wanderlei Silva. And though Jackson fell short of victory against “The Axe Murderer”, his heart and especially his chin were aspects of his game that few will ever forget witnessing that night.

Ricardo Arona – June 20, 2004 – PRIDE Critical Countdown 2004
Result – Jackson KO1
Fighting Wanderlei Silva on eight weeks notice is no picnic – doing it on the same night that you’ve just fought Chuck Liddell is insanity, making Jackson’s 2003 loss to Silva easily explainable. But to get back to ‘The Axe Murderer’, Jackson had to beat highly-regarded Ricardo Arona, and he did, scoring one of the great knockouts in MMA history.  This finish crystallized the fact that while Jackson is one of the most affable fighters in the game outside the ring, inside of it, he’s looking to take you out. His ring-shaking slam out of Arona’s triangle choke (which KOed the Brazilian) was a frightening reminder of what you can expect from ‘Rampage’ when the bell rings.

Wanderlei Silva II – October 31, 2004 – PRIDE 28
Result – Silva KO2
Four months removed from the win over Arona, and with a full training camp under his belt, Jackson was confident going into the rematch with Silva, and he showed the improvement in his game during an impressive first round. But in the second, Jackson – who had fasted for three days prior to the fight after converting to Christianity – started to run low on gas, and Silva made him pay, dazing him with a punch and then finishing him off with a vicious series of knees. Jackson would get a final shot at redemption against Silva, but he would have to wait over four years to get it. And to get a third bout with “The Axe Murderer” it had to occur in the UFC Octagon…