"Rampage" Jackson - Fighting For That Moment

“Every fight I fight, I want to knock people out or finish the fight.” - Quinton Jackson 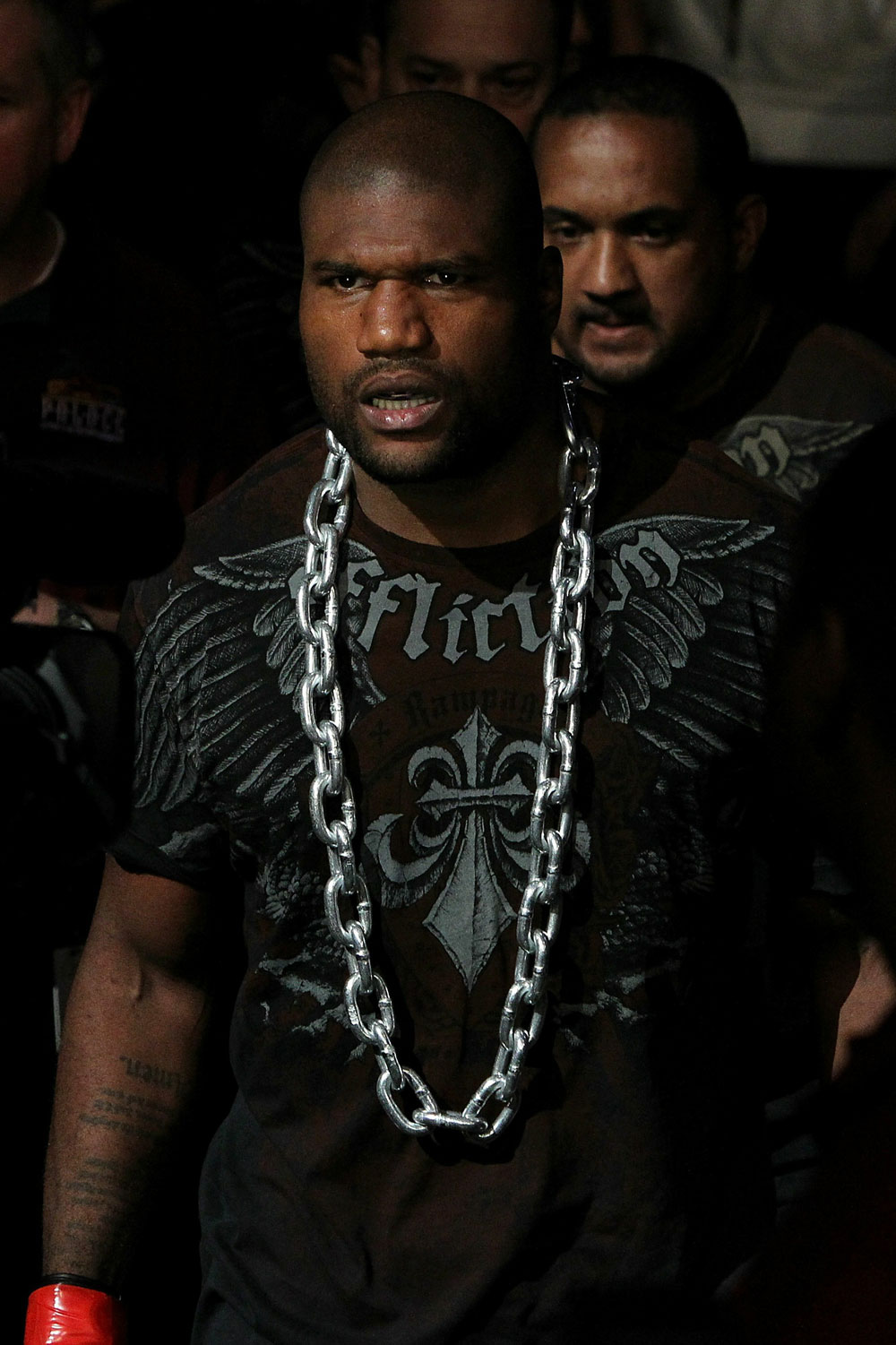 Chuck Liddell is retired now. So is Murilo Rua. Ninja’s brother, Shogun, has lost two of his last three. The story’s the same for Wanderlei Silva, who is finally returning in July after more than a year away.

But Quinton “Rampage” Jackson, one of the aforementioned fighters’ most prominent peers, is still trucking along, still winning big fights when he has to (most recently against Lyoto Machida last November) and still a leading man in the title hunt. You could call him the previous era’s last man standing, but don’t be surprised if he won’t.

“Am I (the last man standing),” he asks. “I don’t know how long I’ll be around. (Laughs) I’ve been fighting for a long time, I’ve been putting in a lot of work, and sometimes I don’t feel like I’m as appreciated as I should be. I don’t think I get the props that I deserve. I was the first-ever undisputed champion, the first one to unify the (UFC and PRIDE) titles (against Dan Henderson in 2007), and that’s not mentioned at all and stuff like that. That’s not the main reason why I fight, but at the end of the day it does cross my mind at times.”

It should. Known by many as “Rampage,” the funny guy with the quick quips and practical jokes, the fighter has sometimes gotten the short end of the stick when it comes to appreciating his accomplishments in competition. Since his 2005 PRIDE loss to Shogun Rua, Jackson has won nine of 11 bouts, with the only losses a razor-thin decision to Forrest Griffin in 2008 and a similarly competitive decision against Rashad Evans in 2010 that came after a layoff of more than a year. His victims over that time? Liddell, Machida, Silva, Keith Jardine, Dan Henderson, and Matt Lindland.

That’s more than enough to hang your hat on, but when you consider that he’s also done all this while being one of MMA’s most visible stars, it adds to the impressive nature of this streak of excellence.

Yet he’s still a work in progress, both in the Octagon and out. Outside, he’s learned how to deal with his celebrity, something that was never an issue when he was fighting in PRIDE and returning home to relative obscurity in the States. But once he signed with the UFC, and then appeared in the Hollywood remake of “The A-Team,” he had to get used to being “Rampage” 24/7/365.

“I’ll just be myself no matter how people view me,” he said. “But you just gotta get used to it, people being all in your business and people wanting to talk to you. Most fans are nice. You’ll just get a few people that make the situation weird every now and then, but most are nice.”

In the Octagon, Jackson has benefitted by having UFC vet Lance Gibson leading the way for his last couple camps. The no nonsense trainer knows what it’s like to be a fighter, and he knows every trick in the book when it comes to the things fighters will say to get out of practice. So while Jackson may hate him now, he’ll love him when his gas tank is full on fight night and when his hand gets raised.

“He brings a lot to the table,” said Jackson of Gibson. “He’s a great coach and he knows his stuff. He’s very mentally tough and mentally strong, and he won’t let you crack. When you want to quit, he’ll push you harder and everybody needs somebody like that, pushing you all the time.”

He’ll need that push to get him ready for the charge of Matt Hamill in the UFC 130 main event this Saturday night. Hamill has a solid chin, stellar wrestling, and everything to gain by pinning a loss on Jackson’s 31-8 pro record. Jackson, on the other hand, wasn’t overjoyed when Hamill’s name was penciled in on his dance card. He has since softened his stance on facing Hamill. What was the turning point?

“When I realized that it’s my job,” he said. “A lot of fans don’t realize that you don’t choose your opponents. A lot of fans assume that I chose to fight Hamill, and some fans can be kinda rough on you. You don’t get to choose who you want to fight. If that was the case, I would have fought Forrest (Griffin) a long time ago.”

Instead, he gets “The Hammer,” but don’t expect a dissection on the Ohio native’s fighting style from Jackson. He’ll leave that up to his coaches.

“I never think about stuff like that,” he said. “I just think about the difficulties I’m gonna have for him. I’m not that type of fighter who thinks about what my opponent’s gonna do to me.”

What is clear though is that Jackson has every intention of making Hamill his first stoppage victim since he avenged two losses to Silva with a single left hook at UFC 92 in 2008. In three fights since, he has been forced to hear the final bell, but his lack of finishes doesn’t come from a lack of trying.

“Every fight I fight, I want to knock people out or finish the fight,” he said. “But one thing that non-fighters don’t understand is that fights are fights; you can’t plan what happens. I’m not gonna go out there and say ‘oh, let me lay and pray;’ I go out there like I want to finish this guy. But it don’t always work out the way you want it to. It’s a fight. I’m going into this fight and I’m gonna try to knock his head off, but if it don’t come I’ll be disappointed, but it won’t make me stop.”

And if you look at his last three decisions, Jackson wasn’t exactly done any favors stylistically. Machida has a notoriously hard style to decipher, Evans’ wrestling can defuse even the most explosive striking attack if he decides to shut you down, and Jardine’s unorthodox attack can drive anyone crazy.

The aggressive Hamill is likely to change that pattern, making this the perfect opportunity for Jackson to let loose as well. That has meant a rigorous camp from Gibson, and daily torture for Jackson. He laughs, but only in a bemused way.

“I forget about how hard camp is. I can’t believe I do this for a living.”

He does though, and few do it better. But for all the work and all the sacrifices, there must be some reason why he still puts himself through this after all these years. So the question is asked, ‘is there still a fun part to this?’

He pauses, then responds.

“Maybe after the fight when you win and you made your coaches and your family proud, and the fans are cheering for you and stuff like that,” said Jackson. “You’re celebrating after the fight and you’ve got a few aches and pains and you feel like you’ve been in a fight, but all your friends are smiling and telling you what you did in the fight; that’s the fun part and the part that you forget about all the time. Then afterward you remember ‘oh yeah, this is why I fight.’ It’s for that moment. When you’re walking back to your locker room after the fight, the fans are yelling your name and trying to give you high fives, that’s the fun part right there.”

And it never gets old?

“That never gets old.”