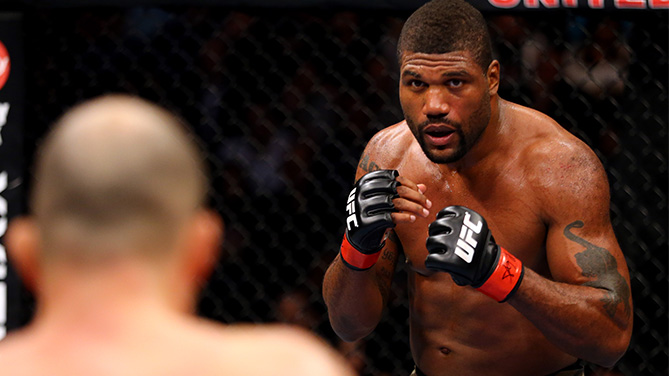 Quinton “Rampage” Jackson never lost faith. Even when an April 7 court injunction threatened to scrap his return to the UFC, the former light heavyweight champion didn’t stop training. In fact, he amped things up back home in California.

“Yeah, I was staying in the gym,” Jackson said Thursday morning in Montreal. “This thing was a little stressful, but I started training even harder.”

He didn’t have a fight, as his UFC 186 meeting with Fabio Maldonado was a casualty of the legal proceedings with Jackson and his previous promoter, Bellator, but as soon as the injunction came down, Team Rampage was confident of a positive outcome.

“My attorneys were shocked when we got this injunction, and they had a feeling that I had a good chance of winning the appeal,” he said, and his attorneys prepared the appeal, filing it late last week, while Jackson remained hopeful of getting back on Saturday’s card at Bell Centre.

“I was still in fight mode, but I just didn’t know,” he said. “That was the most stressful part right there. I figured I would find out on Friday, but that’s when they filed the appeal. So the whole weekend just drained me emotionally.”

Yet on Tuesday of this week, Jackson got good news, as the injunction was overturned. There will still be a legal battle between the Tennessee native and Bellator over the contract Jackson said they breached, but on Saturday, Rampage will be back in the Octagon with gloves on and mouthpiece in, ready to throw down in a UFC bout for the first time since a January 2013 loss to Glover Teixeira.

That defeat capped off a three-fight losing streak for Jackson, but a change of scenery did him good, as he won three straight, two by knockout, outside the Octagon, and now the 36-year-old is back. Of course it took a few twists and turns, but what’s a Rampage Jackson fight without a little drama?

So to recap for those not in the loop over the last couple weeks, Jackson gets pulled from Saturday’s co-main event, leaving Maldonado without an opponent. CB Dollaway vs. Michael Bisping gets elevated to the co-main slot, with Maldonado to face Octagon newcomer Steve Bosse. Jackson gets the green light to fight again on Tuesday, and he’s back in against Maldonado in the co-main position, with Dollaway-Bisping moving down one space on the UFC 186 Pay-Per-View card. It’s been a crazy week, but when fans found out that Rampage was back, it was some welcome news, a fact that Jackson appreciates.

“That makes me feel like my legacy and my job were well done because all I ever wanted was for promoters to know that I’m the type of fighter that comes to fight and the fans get behind it and want to see it,” he said. “If the promoters treat me right and keep me happy, I’ll fight as long as my body can fight and I’ll always put on an exciting fight, whether I win or lose.”

So what is it about Jackson that nearly 16 years after his pro debut, people still care? He knows exactly what it is.

“Fans want to see people like me fight and I think I’m the last of a dying breed of the old MMA fighters that step into the Octagon just to throw down and put on a great show,” he said. “None of this game planning and running around, showing that I’m a better athlete and that I can win on points. I try to finish fights every chance I get.”

But the big question is, does Jackson believe Brazil’s Maldonado is one of that “dying breed” as well?

“Yeah, I think he’s a very good fighter from what I hear about him,” he said. “He comes from a boxing background, and stand-up fighters are the most exciting fighters in mixed martial arts.”

Sounds like a fight’s brewing in Montreal this Saturday, and that’s music to Rampage Jackson’s ears.