Less than two minutes into the third round of his UFC debut against Max Griffin last November, the veteran connects with a right hand that wobbles the newcomer. Griffin recognized it immediately and chased him to the cage with a series of short punches, working into the clinch. He extracted his right arm and landed an elbow to the right side of Brahimaj’s head, and when their bodies swung around a second later, you could see something was terribly wrong.

“It was a punch as I was trying to move my head off the centerline; it was a punch that grazed and at first, I thought the side of my head was cut open,” recalled the Fortis MMA representative. 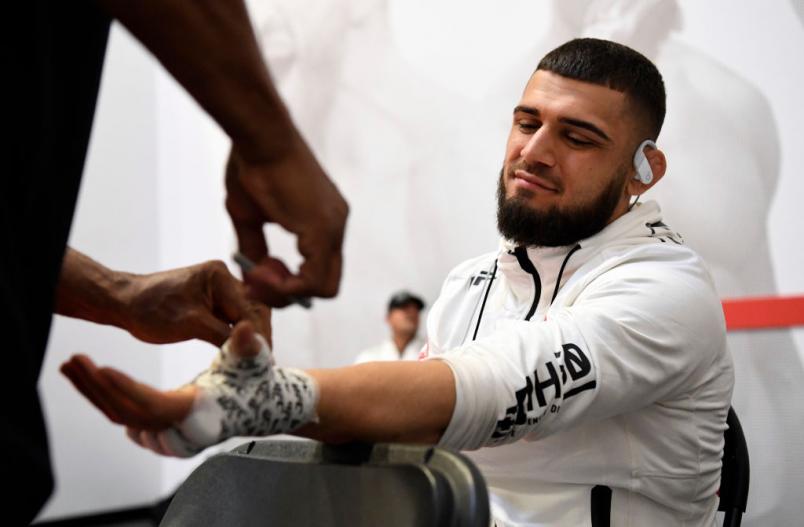 Ramiz Brahimaj has his hands wrapped prior to his fight during the UFC Fight Night event at UFC APEX on November 07, 2020 in Las Vegas, Nevada. (Photo by Mike Roach/Zuffa LLC)

Ramiz Brahimaj has his hands wrapped prior to his fight during the UFC Fight Night event at UFC APEX on November 07, 2020 in Las Vegas, Nevada. (Photo by Mike Roach/Zuffa LLC)

The top half his ear had been severed from the side of his head, resulting in a stream of crimson running down the side of his head, and onto Griffin’s head and shoulders. Already busted up and bleeding from the previous two-plus rounds of battle, Brahimaj now looked like an extra from a low-rent slasher flick, and the only thing he thought about was keeping his mangled ear out of referee Mark Smith’s sight.

“As soon as it happened, I was trying to get away so that the ref didn’t see me, because I knew he would call the fight immediately,” offered the 28-year-old, who returns to action this weekend against Sasha Palatnikov. “I wanted to keep moving so the ref wouldn’t see it, so I could just make it to the end of the fight, but unfortunately, it didn’t work out that way.”

Despite the grizzly injury and catching a loss in his promotional debut, the Bronx-raised Brahimaj sees only positive takeaways from spending 12 minutes inside the Octagon with a veteran like Griffin.

“I needed that, especially with the layoff that I had prior to that fight,” began the now 8-3 welterweight, who was forced out of an appearance on Season 3 of Dana White’s Contender Series when his medical imaging revealed a half-dollar-sized tumor behind his eye. 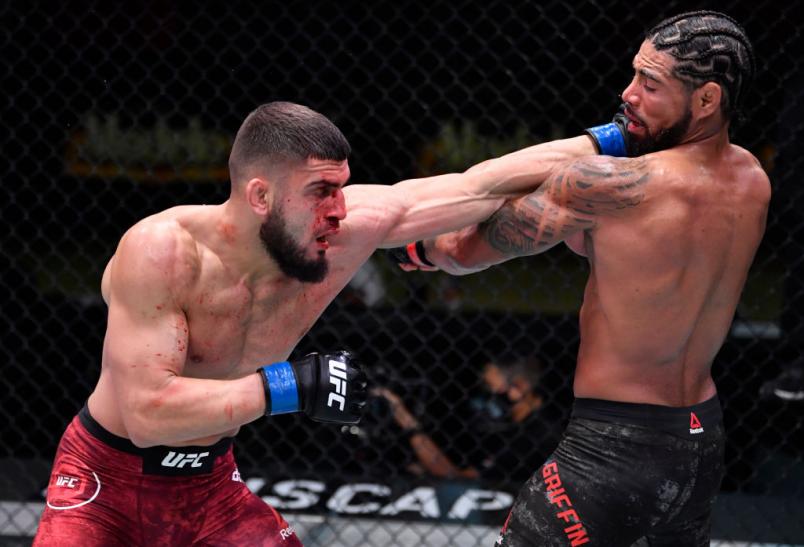 When he was finally cleared and ready to return, his June debut was scrapped at the 11th hour when one of his corners tested positive for COVID-19, prompting him to make the return drive from Las Vegas to Dallas with teammate Alonzo Menifield a couple days sooner than expected.

“Those were extremely crucial and extremely important minutes that I needed under my belt for my growth, for my maturity, for my career. I know as f***** up as it sounds, I’m a guy that looks at the silver lining and I see the importance of that bout against such a battle-tested veteran in Max Griffin. Those are moments that nobody can take away from me, and the knowledge and the growth paid dividends in terms of my training, my mental state. 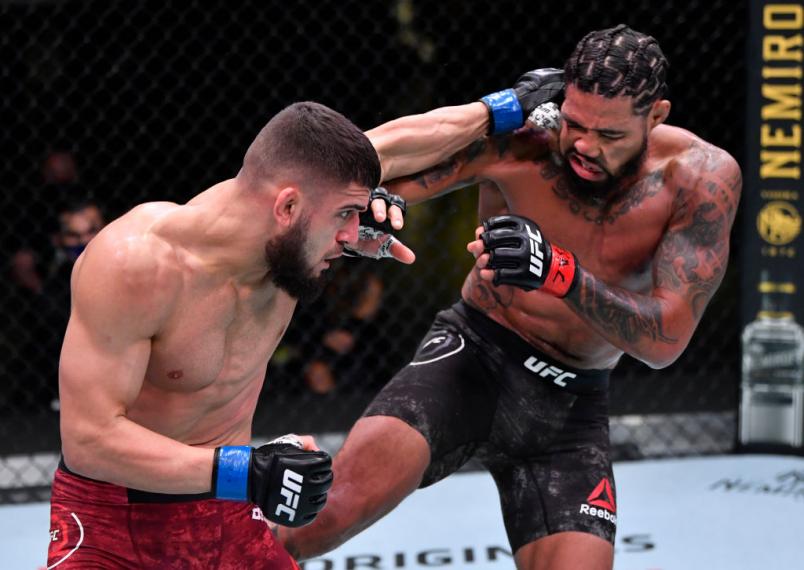 Working alongside a cast of emerging contenders at Fortis MMA in Dallas under the guidance of “The General,” Sayif Saud, the welterweight hopeful has witnessed teammates parlay maximum effort in the gym into meaningful success inside the Octagon, both from afar and while working in their corner.

Those experiences, coupled with the dozen minutes he logged against Griffin, who has since earned impressive victories over Song Kenan and Carlos Condit to draw closer to cracking the Top 15, have fostered a new kind of resolve and enjoyment in Brahimaj as he readies to make his second trip into the UFC cage this weekend in Las Vegas.

“My intensity has always been high and my work ethic has always been through the roof; that’s something I pride myself on,” began the first generation American. “I’m the son of immigrant parents, so I know a thing or two about hard work, but the thing that shifted the most is my mindset to where I’m really enjoying that psycho work.

“I used to dread it, but now I love it,” he continued, a sharp, telling snort of a laugh chasing his words. “Put me in that fire; I want to go back.

“A lot of people see a dark place and they avoid it, but me, I don’t mind living there. I’ll rent space, I’ll own property in that dark place; it doesn’t bother me. I’ve made friends with that place. I’ve made my peace with being there. You can’t tell me, ‘I’m going to take you to this dark place and drown you.’ You’re not going to do that. I’m a very buoyant human being.” 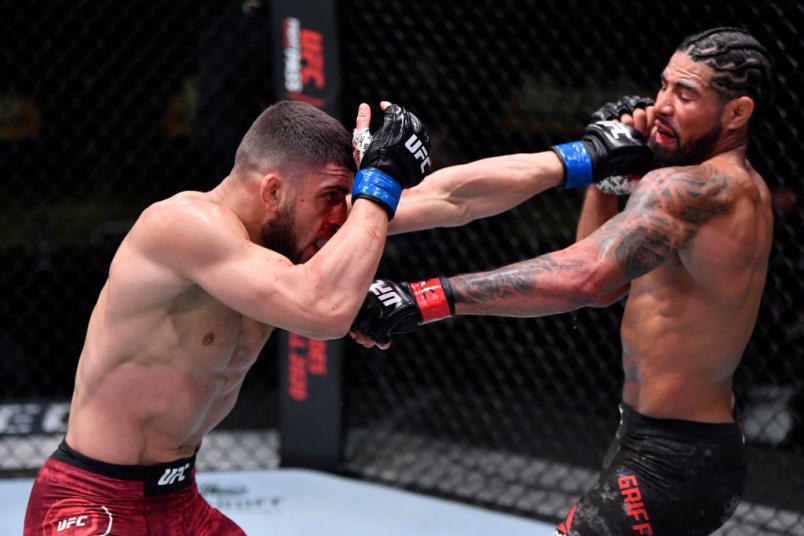 Whether it’s buoyance or simply a steely resolved forged as the child of immigrants and strengthened through service to his country, Brahimaj believes those hard minutes logged late last year and his subsequent embracing of the darkness will be the differentiating factors when he steps into the Octagon with Palatnikov on Saturday evening.

“That’s going to be the big differentiating factor and what separates me from Sasha. He’s extremely tough, man — he comes, he swings; the dude is ready. He has all my focus, all my attention, and wherever the fight may go, I see me taking him out.

The first two years of Brahimaj’s UFC journey have gone about as far off-script as you could possibly imagine — a tumor, surgery, a cancelled fight, an injured ear, and a debut loss — and yet on the eve of his second appearance in the Octagon, the only thing Brahimaj is focused on is the future.

“This is not where I had envisioned myself starting off. I had always envisioned winning my UFC debut, but sometimes in life, you have to adapt, overcome, and continue on.

“I will get my hand raised August 21 and it will be the first of many UFC wins,” he added. “I’m looking to go on a winning streak. Whenever I’m on and I’m firing at the best of my abilities, I know I will be a problem for many people in the division, but I can’t look any further than August 21.”