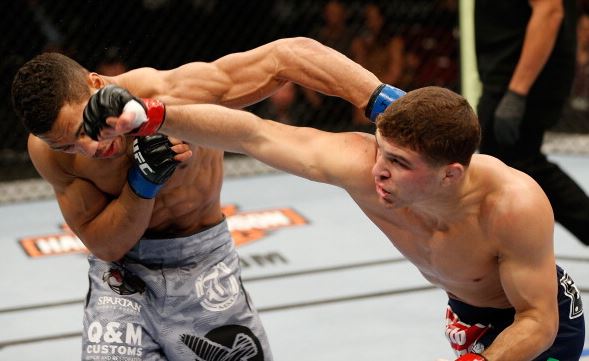 NEWARK, February 1 - Local lightweight favorite Al Iaquinta made it three straight wins in the Octagon in UFC 169 prelim action at the Prudential Center Saturday night, holding off a stellar effort from previously unbeaten newcomer Kevin Lee to take a close, but unanimous, decision.

Lee (7-1) had a rough start to his UFC career, getting dropped by an Iaquinta left hand in the opening minute, and nearly getting submitted moments later after a slick reversal by the Long Islander, who was sharp from the opening bell.

The Grand Rapids product came out for round two as if nothing had happened a minute earlier, quickly taking Iaquinta down and almost sinking in a rear naked choke. Iaquinta (8-2-1) found some daylight and escaped, but Lee refused to give up the back position for the rest of the round as he looked for the finisher a second time.

With the bout even heading into the third, both fighters came out fast, but it was Iaquinta striking first, hurting Lee with a right hand to the head. Lee rebounded with a takedown and some strikes that bloodied the New Yorker’s nose, but Iaquinta rose quickly, and though Lee acquitted himself well for the rest of the round, the former Ultimate Fighter 15 finalist did better work down the stretch to take the victory.

In the final prelim bout of the night, Brazil’s Alan Patrick remained unbeaten with a three round unanimous decision over John Makdessi.

Patrick came out blasting at Makdessi, trying everything in his striking arsenal as well as attempting two takedowns that came up short. Makdessi stood calmly in the eye of the storm, but he was finally taken down in the final minute, albeit briefly.

Makdessi’s patient approach was effective throughout much of the next two rounds, even if Patrick was the flashier of the two.  And while the effectiveness of the Brazilian’s maneuvers came only in spurts against the more technically sound Canadian, it was apparently enough for the judges who deemed him the winner.

In a flyweight matchup, Chris Cariaso spoiled the UFC debut of Danny Martinez, winning a close three round unanimous decision.

Cariaso had success with his striking in the first round when he had room to operate. Unfortunately, for much of the frame it was Martinez smothering Cariaso against the fence and putting together a couple takedowns. The second round played out in a similar fashion after some heated early exchanges, a progression that didn’t sit too well with the restless Prudential Center crowd, but Cariaso’s work made an impression with the judges, and in the third, his work rate while standing did enough once again to lead him to victory.

Compelling action was in short supply in the middleweight bout between Nick Catone and Tom Watson, but the New Jersey native’s wrestling allowed him to eke out a three round split decision win.

There was little in the way of significant scoring from both men in the opening round, save for a couple right hands and a late takedown by Catone. Watson was effective with his kicking game in the second, but any positive momentum the Brit was able to build up was slowed by two Catone takedowns. The same pattern played out in the third, with it being enough to get “The Jersey Devil” the victory, which ups his record to 10-4. Watson falls to 16-7.

Middleweight prospect Clint Hester moved to 3-0 in the UFC with a three round unanimous decision win over fellow TUF 17 competitor Andy Enz.

It looked like it was going to be an early win for Hester, as his left hand dropped Enz and subsequently jarred him as well, but the Alaskan was resilient, shaking off the shots and eventually landing some hard blows of his own in the final two minutes to show that he wasn’t done yet.

Enz continued to surge in the second stanza, with his standup success forcing Hester to get two takedowns in retaliation.

With the fight possibly up for grabs, both fighters emptied their gas tanks in an effort to surge ahead, but in the end, it was Hester with the harder strikes landed throughout the final five minutes, garnering him a well-earned victory.

In a clash of lightweight debutants, Rashid Magomedov survived a near first round submission to pound out a hard-fought three round decision win over previously unbeaten Tony Martin.

Martin had great success on the ground in the opening frame, nearly submitting Magomedov on several occasions before the gutsy Octagon rookie eventually broke free, drawing an appreciative roar from the crowd.

A takedown attempt that went awry in round two resulted in Martin falling to his back with Magomedov in the top position, and it allowed the Dagestan native to get on the board and bruise Martin up under the left eye before the Minnesotan got back to his feet. Magomedov retained control while standing, landing point scoring blows throughout the round.

Magomedov kept his momentum going in the final round, nearly sinking in a guillotine choke and generally dominating the action, even prompting a visit from the Octagonside physician to check Martin’s face, which had taken its fair share of abuse.

Despite being taken to the mat twice, the opening round clearly belonged to Magny, whose busy standup attack was sharp throughout. And if that wasn’t enough, a late Magny takedown resulted in the Coloradan almost sinking in a rear naked choke.

Umalatov (14-3-1) had a better second round, but Magny remained in the lead, again surging in the final moments of the stanza, this time with a flurry of ground strikes as he took his opponent’s back a second time.

Wisely showing a sense of urgency in the third, Umalatov was able to crack Magny with some bombs and scored a couple takedowns, but Magny battled through it all offensively and defensively, never seeming in danger as he wrapped up the big win.