"I won't feel any pressure because I have a certain style of fighting and I don't intend to change it completely." - Rafael Natal 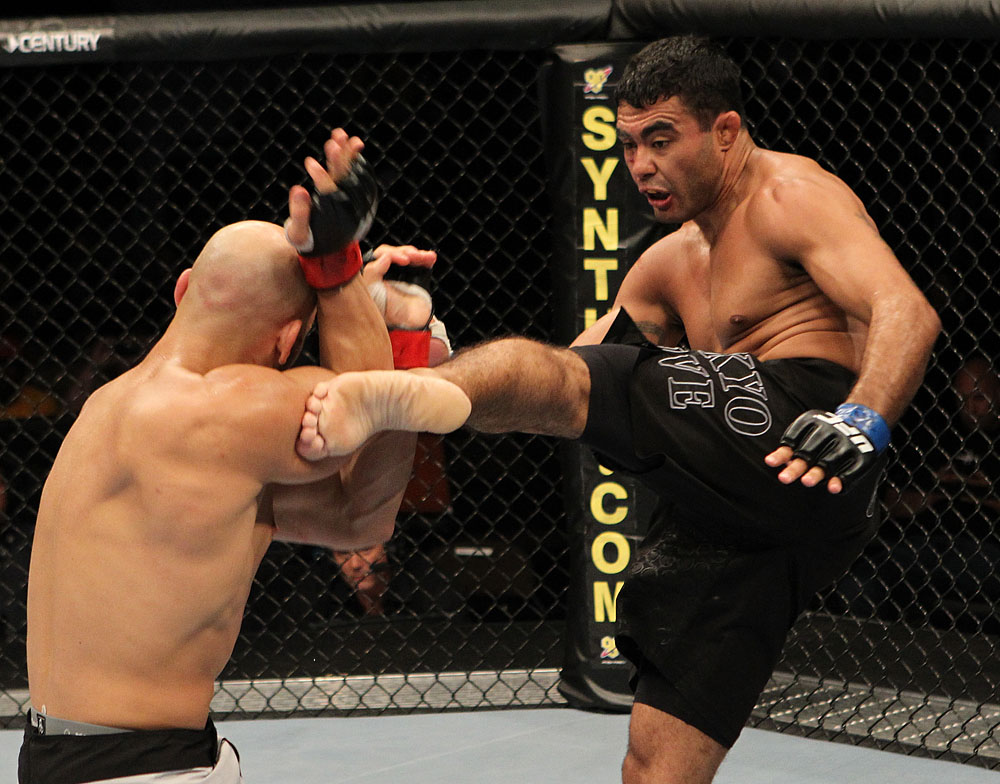 Determined to erase the picture of his first fight in the UFC - a decision defeat against Rich Attonito in September of 2010 - Rafael "Sapo" Natal stepped into his second fight for the organization prepared to impose his game, and against Jesse Bongfeldt at UFC 124 last December, we watched a fast-paced display in the first round that was unlike any virtually any middleweight fight inside the Octagon.

Not only did Natal seem to be in “sprint” mode, but Bongfeldt was as well. Yet those first five minutes of intensity, with changes of position, constant pressure and scrambles everywhere from both men, would charge a heavy price if neither of them could finish the fight in the first stanza. And when the horn sounded, Natal's professor, Vinicius Magalhaes, said he was worried about the extension of energy without securing a position for more than seconds.

Early in round number two, Bongfeldt seemed to be a little less fatigued than Natal, and he started a blitz that caused problems for the Brazilian. Even though Natal got the Canadian's back twice during the match, he took a beating from the mount as his opponent dominated the third and final round.

For a man who wanted to make a second appearance different than his first one, Natal seemed to have lost the battle of conditioning as he couldn't keep the same rhythm of the first round. It was a bit ironic, since Natal was always known as a man with four lungs, and with a draw declared after 15 minutes against Bongfeldt, the Brazilian's empty fuel tank was later explained

"I didn't pick up the win, but I think I fought well," Natal affirms. "I never had cardio problems in my fights - in fact, this is one of my strong points, you know. But 15 days prior to UFC 124 I took some medication to heal an infection, and I believe this was one of the reasons I didn't come across as the winner."

So what was the other reason?

"Lack of competence," he says firmly.

With the UFC 124 bout behind him, the quest continues for Natal, because, after all, the Brazilian Jiu-Jitsu black belt is still pursuing that coveted first victory. His new chance, a fight against Alessio Sakara at UFC Live on March 3rd, was good news for the Brazilian, mainly because he wasn't originally scheduled to fight on the Versus card, only being called into service to replace countryman Maiquel Falcao against the Italian. Yet weeks later, the Minas Gerais native was sidelined from the fight with a knee injury.

"I tried to carefully treat the knee for five days, but realized my effort wouldn't render a full recuperation. I stayed 15 days without any fight contact, and then trained some striking. BJJ and wrestling took a while, around 30 days. But now I'm 1000 percent."

The number one thousand matches well with the Natal's intention to shine at UFC 133 on August 6th, where he will face Paul Bradley. His original opponent, Riki Fukuda, was removed from the card after a car accident, and the changes didn’t stop here, as the road of Natal was crossed many times until he ended up with Bradley. Like a soap opera unfolding, the Serra-Longo Fight Team’s Costa Philippou stepped in as a replacement for Fukuda, but the man who Natal was scheduled to fight in March, Sakara, left his main card bout against "El Conquistador" Jorge Rivera due to a knee injury, and Philippou was promoted to the main card to face Rivera, with Bradley filling the gap to take on the Brazilian.

"Opponent changes are something we have to deal with and be ready for," he says. "Because the UFC is scheduling fights with a good advance notice, keeping yourself training hard for 3-4 months is normal in case someone else gets injured."

But three changes usually mean three different plans. And even though fighters can be similar, they’re never equal in every aspect of their game.

"Of course the tactics change, but basically we're working on fixing small gaps and finding holes in his [Bradley's] game," he said.

And in terms of tacticians, Natal has two excellent ones taking charge of seeing what many don't and constructing a road where he can drive in the direction of victory. Those men are Magalhaes and the legendary Renzo Gracie.

"Having masters at this level like Magalhaes and Renzo gives you a huge comfort," Natal says. "They and the whole team put me at peace, and they are confident I'll do my best."

This fact is really important for “Sapo” against Bradley, who comes in with a five winning streak and can exploit Natal’s need for a victory inside the Octagon. This pressure is something which can drain your stamina, throw off your strategy and be the main reason for a new and unwelcome defeat.

Add to this the fact that Natal has become a frequent Twitter user, and his constant interaction with his followers has many eager to watch him fight for the first time on Facebook. This new public wants to see the old Brazilian, the one who arrived in the UFC with five victories by finish in his last six fights. It’s a lot to carry on his shoulders, and each of these aspects can influence him, either for good or bad. So what’s the key to not failing in his third attempt?

"I won't feel any pressure because I have a certain style of fighting and I don't intend to change it completely. You'll only see a “Sapo” with more cage experience and who is technically at his sharpest. I'm very happy that this fight will be live on Facebook and I hope everybody sees the return of the real Rafael Natal."