"I hope I can not just win, but make a really good fight, and I want to keep fighting on the main card." - Rafael Natal 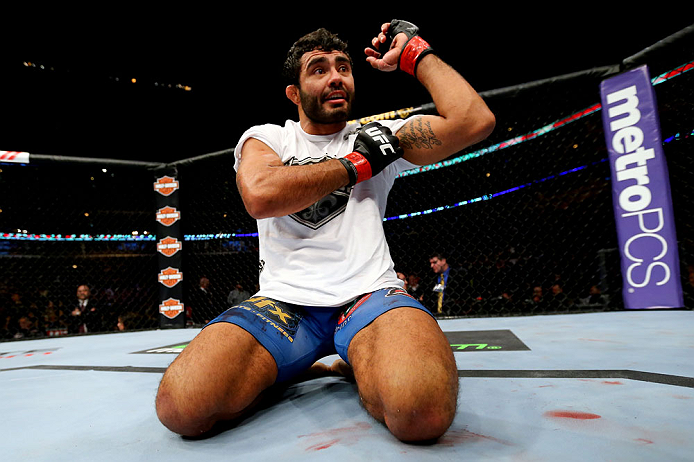 The last time Rafael Natal put on gloves and fought in his native Brazil, he lost for the first time in his pro MMA career to Eduardo Telles in July of 2008. It may have been the best thing that ever happened to him.

Nearly five years later, the 30-year-old Natal returns to his home country not as a prospect with potential, but as a UFC fighter on the verge of entering the top ten at 185 pounds should he continue having the success that has led him to wins in three of his last four fights. But his main card bout against Joao Zeferino this Saturday in Jaragua do Sul may not be happening if not for his loss to Telles in Rio de Janeiro.

At the time, Natal was a black belt in jiu-jitsu under Vinicius “Draculino” Magalhaes (not to be confused with UFC light heavyweight Vinny Magalhaes) and an up and comer on the Brazilian fight scene who owned a 7-0 record and a 2006 TKO of future UFC fighter Danilo Villefort. But as he prepared for Telles, Draculino relocated to the United States, leaving Natal without his mentor for the fight, which he lost by second round knockout.

“It was the beginning of my career in MMA, and my master, Vinicius Draculino, had lived with me in Brazil all through my life. And then he moved to Texas and I stayed in Brazil without him,” said Natal. “It was a good experience because when I lost this fight in 2008, I made the decision to move to America because Draculino wasn’t there anymore with me. I needed to go there to Texas.”

But when Natal called his teacher of his plans, Draculino – who was just getting settled in Texas – had a better idea for his student.

“He advised me to train with Renzo (Gracie) in New York and then everything happened here,” said Natal. “Renzo opened all the doors for me, all the Gracie family gave me great support, and then I started to have a dream to fight in the UFC. I fought in small shows first and then I had the opportunity to fight in the UFC.”

After a 5-1 stint in the States that included a first round knockout of former UFC contender Travis Lutter in May of 2010, Natal was brought into the Octagon, where he lost his debut via decision to Rich Attonito in September of that year. A draw with Jesse Bongfeldt in December still kept him winless, but beginning with his UFC 133 win over Paul Bradley, Natal has won three of four, with the only loss coming in a fight he was winning against Andrew Craig last July.

The secret to his recent success? A growing team that includes a fighter turned dentist who organizes his camps, Gracie, Draculino, renowned coaches Phil Nurse and Ricardo Almeida, and training partners like Frankie Edgar and several members of the Gracie family. It may seem like a cast of thousands, but for Natal, they’re all like family.

“After we started to work together I had more success in UFC and my career.”

And being so far from his home in Belo Horizonte, Brazil, Natal has embraced his new support system, which includes his girlfriend, his coaches, his teammates, and even the students he teaches at Gracie’s academies in New York City and Brooklyn.

“I teach them, but I also learn a lot of things with them and that’s why I like to teach,” he said. “After I started teaching jiu-jitsu in Brazil in 2005, my jiu-jitsu improved a lot, and the same thing has happened with MMA. After I started to teach MMA here, I can see the difference in my game. When students train, I can see what’s wrong, what’s right, what I can take for my game, and that’s helped me a lot.”

Yet despite his status as a bonafide New Yorker, that doesn’t mean he isn’t looking to supplement his usual three to four yearly trips to Brazil with another one this weekend.

“This is going to be the first time I fight in the UFC in Brazil, my first time on the main card, and I’m very excited about that,” he said. “I received a lot of email and messages from Brazil and they always support me so I’m very excited to have this huge experience that the UFC gave me and to see what’s going to happen.”

Natal should be ready for anything, given that he’s already jumped in on short notice to face Chris Camozzi on this card, only to see Camozzi moved to the co-main event slot against “Jacare” Souza when Costa Philippou got injured. Enter debuting jiu-jitsu ace Zeferino, but Natal wasn’t flustered by the switch.

“I know this always can happen. With me it’s the third time it’s happened, and we just have to change a little bit in the training for the fight. Camozzi’s mainly a standup guy and doesn’t have jiu-jitsu like Zeferino so I just changed a little bit. I always train everything and I prepare for all the areas in the fight, so when they called me and let me know about the change, I studied Zeferino a little bit and focused a little bit more on my jiu-jitsu. I know he has good standup too and good wrestling, and I don’t think the fight’s going to be jiu-jitsu against jiu-jitsu.”

And if it does?

“The fight starts on the feet, and I don’t know if he’s going to try and take me down,” he said. “For sure, if it goes to the ground we’re going to see which jiu-jitsu’s better, but a lot of other things can happen in the fight.”

One of those things is that Rafael Natal wins his fourth fight in his last five and makes a statement to a national television audience that he’s ready for more prime time outings. “Sapo” likes that option.