Rafael Natal: From Capoeira to MMA

"I think I’m top 15. I’m ready to win this next fight and I look forward to moving up in this division." - Rafael Natal 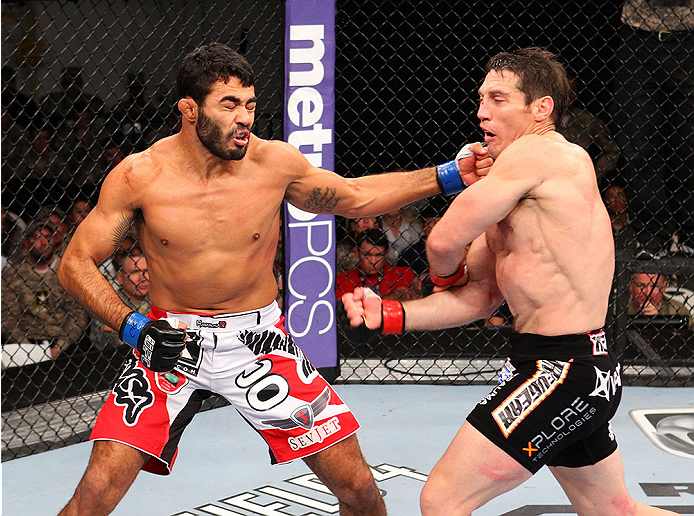 For many mixed martial artists from Brazil, fighting started on the beach with friends before and after school with a recreational martial art called Capoeira.

It was no different for Belo Horizonte native and UFC middleweight Rafael “Sapo” Natal.

“I started Capoeira with my friends in Brazil, “says Natal. “Every day after school we would get together and practice. Maybe I will try some Capoeira in my next fight, but then I discovered jiu-jitsu and after two years I was a world champion and after that, in 2003, I got into MMA.”

Natal has never looked back, and at 31, he is realizing a childhood dream to fight for a living in the biggest organization in the world.

“I am very happy that this is my tenth fight in the UFC,” he said. “My dream is to stay in the UFC. It’s not hard to get into the UFC, but it is hard to stay in the UFC and get more contracts. This is my fourth contract now and that’s a testament to my dedication and my skill, and the belief the UFC has in me.”

Sapo is looking to bounce back from a first round KO loss at the hands of Tim Kennedy in the main event at UFC Fight for the Troops last November with a win over veteran Ed Herman this weekend at UFC Fight Night: Brown vs Silva in Cincinnati, Ohio.

“He’s a tough fighter,” says Natal of Herman. “I’ve known him from a long time ago. I used to watch him fight before I was in the UFC and he’s someone I respect a lot. He’s got good striking, excellent wrestling and very good jiu-jitsu. When I was told about this fight I was very excited because we are well-matched. We are both very tough and we can take a lot of punches, so it will be an exciting fight.”

“I didn’t show my jiu-jitsu in the UFC yet, but I have a lot of things to show the UFC,” he said. “My jiu-jitsu is very good and it’s a good opportunity with Ed Herman because he also has good jiu-jitsu. It could be a fight where we show the fans how exciting a fight can be with competitive jiu-jitsu.”

Even in the loss to Kennedy, Sapo looked strong before getting caught with a vicious left at the end of round one that ended the fight in favor of the United States Army veteran, a fight Natal took on just four weeks’ notice.

“Some things I learn from, but bottom line is, I cannot say no to the UFC,” he said. “They do everything I ask them to do, so I have no regrets losing to Tim Kennedy. I dominated the first round and he caught me at the end. These things happen. I am very happy and I talked to (UFC President) Dana White after the fight and he thanked me (for taking the fight). This can happen to anybody. It just happened to Edson Barboza, my training partner, and he got caught too. It happens to everyone.”

In Herman, Natal has an opportunity to advance in the middleweight rankings with a win.

“Anything can happen in this division, as we all know,” he said. “A win against Ed will be good for me, but this division is always unpredictable. Luke Rockhold, Vitor Belfort and now (Lyoto) Machida is fighting for the belt, so there are always opportunities for all of us in this division. That’s why I’m always ready to go. I think I’m top 15. I’m ready to win this next fight and I look forward to moving up in this division.”

With Kennedy and now Herman, Natal is facing better known competition than the likes of Tor Troeng and Joao Zeferino who came before them, and to the always amiable Brazilian, it’s a welcome change for his career prospects.

“My last fight I only had four weeks to prepare for Tim Kennedy, but I always try to stay prepared for whenever the UFC calls me,” he says. “After a fight I’ll take 15 days off, eat what I like to eat and stay out of the gym, but then I’m ready to get back to training so I’m always ready to take a fight on two weeks’ notice if that’s what I need to do. When you win you don’t learn as much as when you lose. When you lose you change things up and your coaches make you adjust. My jiu-jitsu comes back better, my striking comes out better and that will be the case in this next fight. I hope to get back to the win column.”