Rafael Natal: The Biggest Fight of His Life

"I trained hard to get a big fight like this, and I’m sure if I beat Tim Kennedy, it will put me on a different level." - Rafael Natal 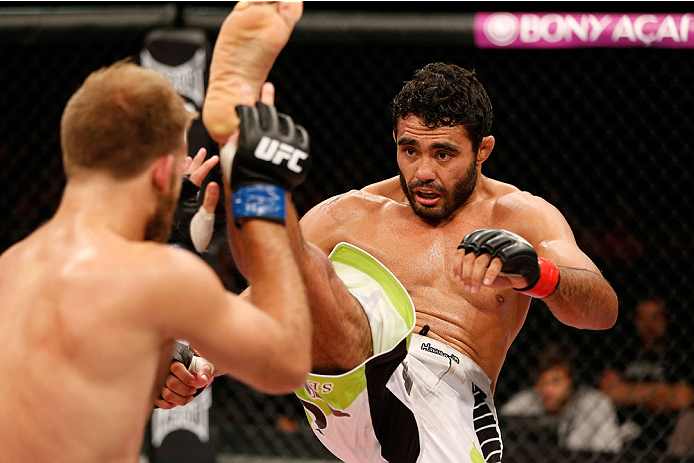 Rafael Natal admits that after his Fight for the Troops main event fight against Tim Kennedy this Wednesday, he’s probably going to take a little break and enjoy the holidays and his birthday back in Brazil. And he’s earned it, with the Kennedy bout being his fourth of the year. But for now, there’s work to be done, and he’s eager to do it.

“This is the biggest opportunity of my career and the biggest fight of my life,” said the 30-year-old middleweight. “When (UFC President) Dana White called my manager and asked me to fight Tim Kennedy in the main event, it was a big surprise for me, but I said of course. I had been waiting for this opportunity for all my life, I trained hard to get a big fight like this, and I’m sure if I beat Tim Kennedy, it will put me on a different level, and that makes me very excited.”

That’s enough incentive alone to strap the gloves on once again, but even without this main event slot, Natal was gearing up for a fourth trip to the Octagon, originally against Ed Herman at UFC 167 a week from Saturday. But when Kennedy’s original foe, Lyoto Machida, was moved to an October 26 clash with Mark Munoz, the call went out for an opponent for the former Strikeforce star, and Natal eagerly accepted a fight with someone he’s got a lot of respect for.

“He’s a great fighter,” said Natal of Kennedy. “A long time ago I started to watch him. I saw his fights against Jacare (Souza), (Luke) Rockhold, and Roger Gracie, and those are some of the best fighters in the world. He lost by decision to Jacare and Rockhold and he beat Roger Gracie, and I respect him a lot. He’s such a tough guy, he’s a great wrestler, has great cardio, and his standup is great too, but I’m ready. I’m ready for the war.”

He’s going to have to be, since he’s fighting the U.S. Army veteran in front of the men and women of the Armed Forces, something that Natal isn’t too bothered by.

“I’m not fighting in his hometown, I’m fighting inside his house, and that’s the truth,” Natal laughs. “Some of my coaches, they worry that I’ll lose my concentration because everybody’s gonna boo, but that’s going to make me strong. I have to focus and not lose my concentration. I focused like that when I fought in my hometown, and didn’t get overexcited with my crowd, and now I’m going to focus and be excited about my opponent’s crowd. I’m feeling great about this.”

If Natal is riding high at the moment, he’s got good reason to. Winner of all three of his fights in 2013, and five of his last six, Natal is coming off a decision victory over Tor Troeng in September that earned him his first Fight of the Night bonus. It’s recognition that obviously helped his bank account, but it also makes him smile that he and Troeng picked up the award for a bout that primarily took place on the ground.

“I was so happy with this victory and this bonus because normally the Fight of the Night is more for standup fights, and this was more of a jiu-jitsu fight,” he said. “I hit him hard twice, I knocked him down in the first and second round, but most of the fight was jiu-jitsu and everybody liked the way the fight was and that made me happy. I come from jiu-jitsu and the people are starting appreciate that more in the fights, and that’s good. Before, when you go to the ground, some people start to boo, but nowadays, if you go to the ground and try to improve your position, try to sweep, and try to pass, people start to enjoy it more.”

But if Kennedy and his team believe they’re just getting “the jiu-jitsu guy” on fight night, it’s key to note that if Natal lands with his fists, you could end up with a trip to the canvas or a short night.

“Especially in my last fight I showed that I have strong hands,” said Natal. “I started to work with (boxing coach) Mark Henry and he’s done a very good job with me. I have good jiu-jitsu, I’m a high-level black belt, and my standup has improved a lot. I also have good takedown defense and good takedowns. But Kennedy is a smart guy, (coach) Greg Jackson knows me pretty well, and they know I’m not just dangerous on the ground. They know the power of my hands, they know my wrestling, and they know I can give him a really hard time standing up too. And if he takes me down, he knows that’s not going to be a good area for him, and he knows it’s going to be a tough fight.”

Another day, another tough fight, but Rafael Natal is not complaining.

“Sometimes a lot of fighters complain that they don’t have a fight and they want to fight more, and I can’t complain,” he said. “I train hard every day and I’m very happy to be fighting again. It’s going to be my fourth fight and I’ve had great results. I already have three wins, and I hope to close the year with a fourth win. I’m so happy with this opportunity. 2013 was maybe the best year of my life.”