Rafael Fiziev Believes He Is The Best

Finally Taking To The Octagon After A Delayed Return, Rafael Fiziev Found The Most Important Thing During His Time Away: Belief In Himself
By E. Spencer Kyte, on Twitter @SpencerKyte • Jul. 5, 2022

Over the last two years, Rafael Fiziev has established himself as one of the top emerging talents in the ultra-competitive UFC lightweight division.

After suffering a quick stoppage loss in his promotional debut and righting the ship with a sturdy effort in his sophomore showing, the 29-year-old talent has rattled off four straight victories, earning a bonus for each effort, leading to a main event opportunity opposite former lightweight champ Rafael Dos Anjos this weekend in Las Vegas.

“Of course, it’s sad — it’s always sad when you lose — but also very, very sad for me because it was the first time I lost by TKO in my life,” said Fiziev, reflecting on his debut defeat at the hands of Magomed Mustafaev, which remains the lone blemish on his MMA record. “But, this was not my first loss — I lost maybe 10 times or 15 times in my life.

“It’s a hard loss for me because it was a TKO, but after three months, I understand that it’s just a fight, just business, and I need to stay strong.” 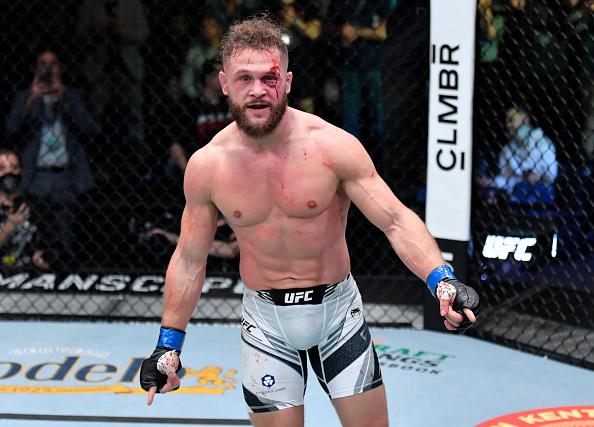 Rafael Fiziev of Kyrgyzstan reacts after his knockout victory over Brad Riddell of New Zealand in their lightweight fight during the UFC Fight Night event at UFC APEX on December 04, 2021 in Las Vegas, Nevada. (Photo by Jeff Bottari/Zuffa LLC)

In that quest to stay strong, Fiziev began supplementing his coaching and training at Tiger Muay Thai in Phuket with spending long stretches at Sanford MMA (now Kill Cliff FC) in South Florida, working alongside a host of high-profile stars and emerging competitors that opened his eyes to his own potential.

“Florida and Thailand are very similar,” began Fiziev, who has alternated between taking home a Fight of the Night bonus and a Performance of the Night bonus over his last four outings. “It’s beaches, you train in the morning, and then you can go to the beach and swim a little bit, take a sun, the same as in Thailand. Here at Sanford, I have a lot of good sparring partners, though; everyone is a professional here.

“For me, it’s a big experience because when I come to Sanford — I see the big superstars like Kamaru Usman, Rory MacDonald, Robbie Lawler, Michael Chandler and I train with these guys. My eyes opened and I understand that ‘this guy is like me, and I’m like him; I can do all the same things as them.’

“It’s made me believe more in my power.”

Fiziev tends to use the word “power” in place of “ability” from time-to-time, but that doesn’t mean he also doesn’t believe in his actual power.

The suddenness of that power was on display in his first-round knockout win over Renato Moicano at UFC 256, where he dropped the Brazilian veteran with a three-punch combo consisting of a lead left to the body, a right to the jaw that straightened him up, and a left hook that put him on the canvas, all of which landed with stunning quickness and accuracy.

It was also on display in his last outing, when he stopped friend and former training partner Brad Riddell with a spinning wheel kick midway through the third round of their clash in early December.

“I don’t know how it is for everyone — maybe for somebody it’s easy, but for me, it’s not easy,” he said of facing Riddell. “If I’m good with somebody, it’s not easy to fight with this guy. After this fight, when I won, I was still shy to talk with him.

“I’m happy because of the good win, but I still feel s*** because I’m close with him and we’re friends.”

While facing Riddell was hard because of the friendship, Fiziev faces a different kind of difficult matchup this weekend when he steps into the Octagon opposite Dos Anjos.

The former champion returned to the division in late 2020, earning a win over short-notice replacement Paul Felder in a bout that was supposed to be against Islam Makhachev. Injuries kept him sidelined throughout 2021, but Dos Anjos was lined up and ready to return against Fiziev in February before the surging prospect was forced to withdraw after testing positive for COVID.

Rather than delay his return and spend more time on the sidelines, Dos Anjos accepted another short-notice opponent, facing Moicano in a five-round catchweight affair at UFC 272 that he dominated. 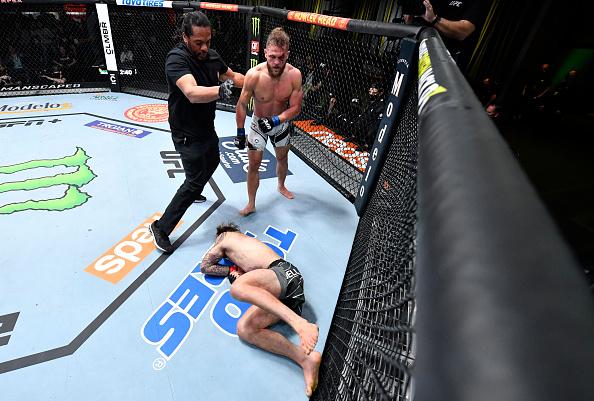 Referee Herb Dean stops the fight after Rafael Fiziev of Kyrgyzstan knocks out Brad Riddell of New Zealand in their lightweight fight during the UFC Fight Night event at UFC APEX on December 04, 2021 in Las Vegas, Nevada. (Photo by Jeff Bottari/Zuffa LLC)

Soon after, he once again signed up to face Fiziev, which further added to the respect the ascending lightweight hopeful has for the Brazilian veteran.

“I respect him a lot because he agreed to a fight with me for a second time, and I respect him a lot for this,” Fiziev said of Dos Anjos, who sits three spots ahead of him in the rankings heading into Saturday’s main event engagement.

“I still think I can show more in this cage and I need more time in this cage,” he said when asked about his progression through his first six UFC showings. “I’m not a beginner, but I feel like I’m just starting, like I am still growing as an MMA fighter.

As dynamic a striker as LW has seen 👊

Although not quite completely correct — Jalin Turner, who is currently positioned at No. 14, has 18 MMA appearances — the large point still stands to underscore just how quickly Fiziev has managed to climb the ranks and establish himself as a threat in the lightweight division, validating what people have been telling the humble and entertaining competitor for years.

“Everyone that is close with me knows that I never believed in my (ability), but everyone told me always — my friends, my coaches, my family — that ‘Hey, you can beat the best and you have big (ability); you just need belief in yourself,’” said Fiziev. “I never believed that myself, but I love this time in the cage; it’s my life.

“I have a lot of amateur fights, but this is amateur still. I have 250 amateur fights in my life, but 12 fights as a professional, so I still feel like I’m growing.”

In addition to growing as a fighter and in terms of experience, he’s also growing into a legitimate problem in the talent-rich lightweight ranks, and with a win on Saturday, he’s almost certain that will translate into him having a difficult time finding someone that will fight him next. 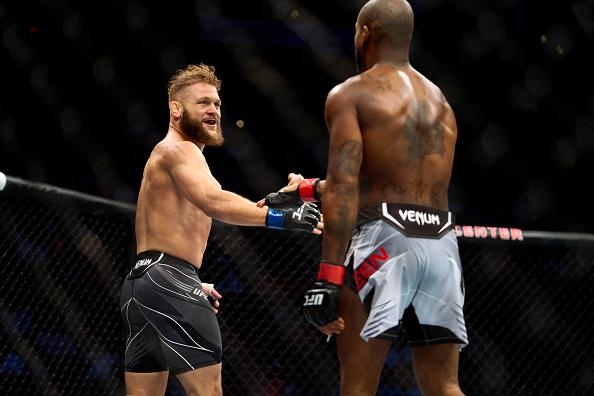 Rafael Fiziev of Kyrgyzstan faces Bobby Green in their lightweight bout during the UFC 265 event at Toyota Center on August 07, 2021 in Houston, Texas. (Photo by Cooper Neill/Zuffa LLC)

But that’s something for him to deal with in the future.

Right now, he’s focused on Dos Anjos, and taking another step towards the top of the division by securing a sixth straight victory this weekend.

“This is a big step towards the title,” Fiziev said. “This is a big challenge for me, like all my fights in the UFC. Rafa is a former champion, and yeah, he’s 37 years old, but I don’t think about his age — I await the best Rafa on July 9.”