"I am going in to finish the fight and I am ready. They will see an aggressive fighter with a lot of will to fight." - Rafael "Feijao" Cavalcante 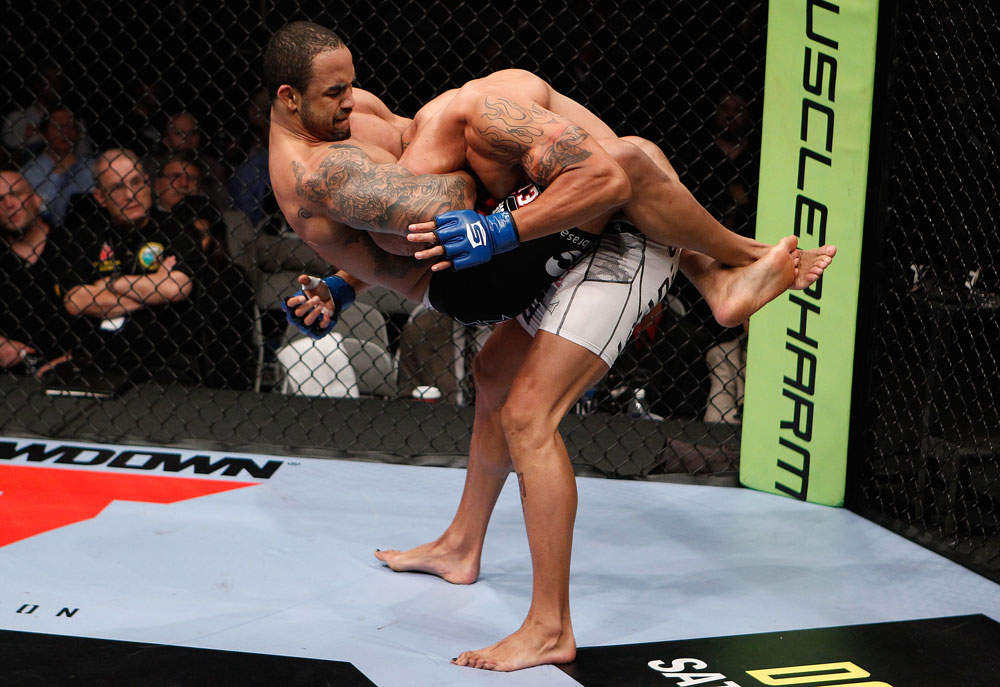 Just like American kids grow up idolizing athletes like Derek Jeter, LeBron James, and Peyton Manning, many Brazilian kids turned to jiu-jitsu greats such as Royce Gracie as their sporting heroes.

Ilha Solteira’s Rafael Cavalcante was one of those kids.

“I always watched the UFC, since when Royce Gracie was fighting,” he said. “When I was a kid and training Jiu-Jitsu, I already wanted to be fighting in there. To me, fighters were like superheroes.”

Only 13 when he and the rest of the world saw Gracie practically create a sport with his performance in the UFC’s first event in 1993, Cavalcante’s journey to the UFC was aided by a meeting in 2006 with another one of his heroes, “Minotauro” Nogueira, who took the up and coming mixed martial artist under his wing. By the end of that year, a December bout with Rubens Xavier in Sao Paulo proved to be his last in his home country until he returns this Saturday for his UFC debut against Thiago Silva.

“I remember the crowd,” he smiles. “Brazilians are very passionate about things they like.”

And they liked “Feijao,” who blasted out Xavier in two minutes and 30 seconds to improve to 3-0 as a pro.

“I knew I was growing,” he said. “I was on the right path to be among the best, and today I believe that I am, but I went through a lot, and a lot of organizations to make it to this point.”

From the IFL to EliteXC and finally to Strikeforce, Cavalcante made his bones in the fight game with an aggressive attack and an apparent dislike for the judges’ scorecards, as none of his fights before or after the win over Xavier went the distance. Along the way, fighters like Devin Cole, Aaron Rosa, Antwain Britt, King Mo Lawal, and Yoel Romero all fell at his hands, and in 2010, the third round TKO of Lawal earned him the Strikeforce light heavyweight title.

His reign would be cut short seven months later when Dan Henderson halted him in three rounds, a pivotal moment in his career.

“I made a lot of changes,” he said. “I felt that I was winning that fight, but it proves that anything can happen.  I matured a lot, I learned a lot, and I believe we learn even more from losses.  I went back and worked on everything; I wanted to improve my boxing, Jiu-Jitsu, wrestling, everything.”

Six months after the loss to Hendo, Cavalcante rebounded in spectacular fashion with a highlight reel worthy knockout of Cuba’s Romero. His May 2012 submission of Mike Kyle was equally impressive, but that one turned into a no contest when he tested positive for the banned substance Stanozolol, also earning him a fine and a yearlong suspension.

“I feel that I grew a lot during the suspension,” he said. “I worked very hard, I had the full support of my Team Nogueira family, I kept my focus and I now believe I am in my best shape, even better than before.”

Returning was a process though, one that took some time.

“I took almost three months off and came back in stages,” said Cavalcante. “I first prepared my body to get back in training, then I started training and had the chance to be a part of some of my teammates’ best camps. I really had a chance to work hard and adjust everything.”

And when your teammates are guys like Minotauro Nogueira, Rogerio Nogueira, Anderson Silva, and Erick Silva, you probably get back up to speed a little bit faster than most. It’s an education money simply can’t buy.

“I pick up a lot of experience,” he said. “They have been through a lot both inside and outside the ring, and they pass that experience on. They also help fine tune things and help with game plans, things that only experience can bring.”

Those master classes with the best in the game will only help “Feijao” in his Octagon debut against countryman Silva, who has nearly as many UFC fights (10) as Cavalcante has wins (11). And on paper, this one looks like a war.

“He is a complete fighter, good on the ground, good on his feet,” he said of Silva. “He is aggressive, a style similar to mine, and whenever he lost, he was fighting until the end.”

As for the first-time Octagon jitters, Cavalcante has been in the corners of Anderson and Erick Silva for their UFC bouts in Brazil, and he knows what the crowd will be like on fight night. But what will the 33-year-old be like?

“The fans can expect to see what I always do,” he said. “I am going in to finish the fight and I am ready. They will see an aggressive fighter with a lot of will to fight.”