Take A Deep Dive Into The All-Brazilian UFC 272 Co-Main Event That Came Together At The Last Minute.
By E. Spencer Kyte, on Twitter @SpencerKyte • Mar. 3, 2022

A couple weeks ago in Houston, Renato Moicano stood in the center of the Octagon after finishing Alexander Hernandez at UFC 271 and pleaded for a chance to prove himself against ranked contenders in the lightweight division.

Three weeks later, the Brazilian is getting his wish, as Saturday night in Las Vegas, he’ll step in against former champion Rafael Dos Anjos in the new UFC 272 co-main event.

It’s been a long road back to the Octagon for Dos Anjos, who last competed in November 2020 when he registered a split decision victory over Paul Felder.

He was originally scheduled to face Islam Makhachev that evening, but the surging contender was forced out with an undisclosed illness, creating space for the veteran stalwart and UFC broadcaster to step in on short notice and give his Brazilian counterpart one heck of a fight under the circumstances.

Dos Anjos trained for that fight in Rio de Janeiro and moved his family there in early 2021, returning to his hometown with designs on making another run at the lightweight title. Injuries delayed his return to action until the fall, when he was once again booked to face Makhachev, but the snake-bitten fight was once again scuttled, as Dos Anjos suffered a knee injury and was forced from the bout once more.

Back at full health and chomping at the bit to step back into the Octagon, he accepted an assignment opposite Rafael Fiziev, another ascending terror few people were rushing to face. The duo was penciled in as the main event of the February 19 fight card at the UFC APEX, but pushed back to UFC 271 when Fiziev ran into visa issues.

Earlier this week, the 28-year-old announced he tested positive for COVID-19 and was unable to compete, leaving Dos Anjos momentarily wondering if his extended hiatus was going to continue.

Thankfully, there was no shortage of competitors ready to fill the void left by Fiziev’s illness, as Twitter was alight with volunteers.

The UFC tabbed Moicano to replace Fiziev, making him one of the few fighters to ever compete on consecutive pay-per-view events. 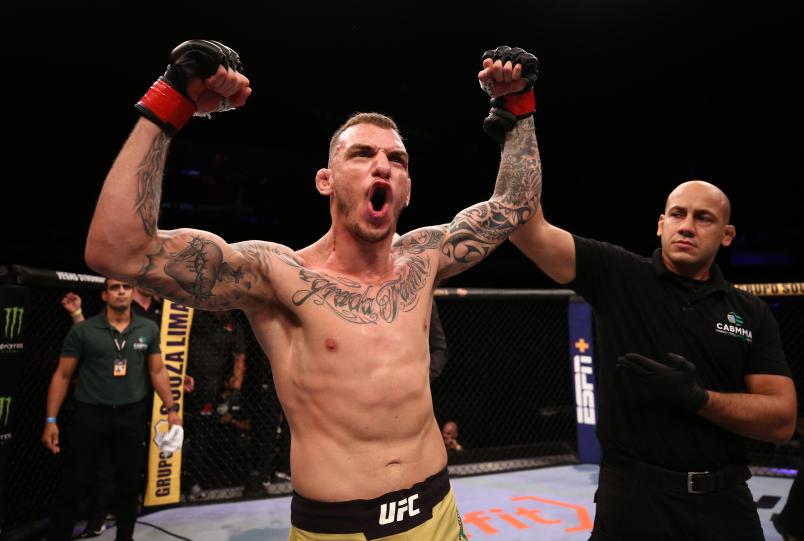 Last month in Houston, the former featherweight contender secured his second straight victory since losing to Fiziev, finding his rhythm on the feet early in his bout with Hernandez before dropping him early in the second and locking onto a rear naked choke to collect the finish.

RELATED: Rafael dos Anjos Is No Stranger To Challenges

It was the third win in four starts since shifting to lightweight for the 32-year-old veteran, who had returned home to Brasilia following his victory and was cutting weight while making the trip to Las Vegas and gets the opportunity this weekend to collect the marquee victory he’s been seeking since changing divisions.

This should be a highly competitive affair between a pair of well-rounded, experienced fighters that share a number of similarities, but also a smattering of key differences, as well.

MORE UFC 272 : Masvidal Is Determined To Wreck Covington | Fight By Fight Preview | Fighters On The Rise | How To Watch UFC 272

Moicano is five years younger than Dos Anjos and carries a three-inch height advantage and two-inch reach advantage into the Octagon for Saturday’s five-round co-main event, while Dos Anjos has a significant edge in experience, having shared the cage with eight current or former titleholders while being one of eight fighters in UFC history to make 30 or more appearances.

Both men are Brazilian jiu jitsu black belts and highly skilled on the ground, with Moicano having won each of his three lightweight victories by way of submission. Though Dos Anjos registered a handful of submission wins during his lengthy UFC career, his pace and conditioning have become his greatest calling cards, as he’s been able to go five hard rounds with a host of elite competitors and broken many a foe with his constant pressure and high-volume approach.

While each man has shown considerable skills on the feet, this is one area where the two differ, as Dos Anjos has flashed greater power and a more diversity in his boxing attack, whereas Moicano tends to use his striking to set up his grappling attacks and he should have a speed advantage on Saturday night.

One thing that will be worth keeping an eye on once the introductions are over and these two begin to exchange blows is that Dos Anjos is the first southpaw Moicano has encountered in the UFC, and while he’s been largely successful during the course of his 12-fight run, two of his four losses have come to opponents that switch stances regularly, Fiziev and Brian Ortega.

In terms of additional X factors, Dos Anjos’ 477-day layoff is easily the longest of his 19-year career and comes when he’s 37 years old and shifting back to the lightweight division, while Moicano is making the quickest turnaround of his career, pushing himself to get down to the 160-pound catchweight for Saturday’s contest just 21 days after defeating Hernandez in Houston.

How each man deals with their respective timing hurdles could go a long way to determining how this one plays out at UFC 272.

Business is picking up in the lightweight division right now, and despite the fact that this one is being contested at a catchweight, it should continue to factor into how things line up in the 155-pound weight class heading into the second half of the year. 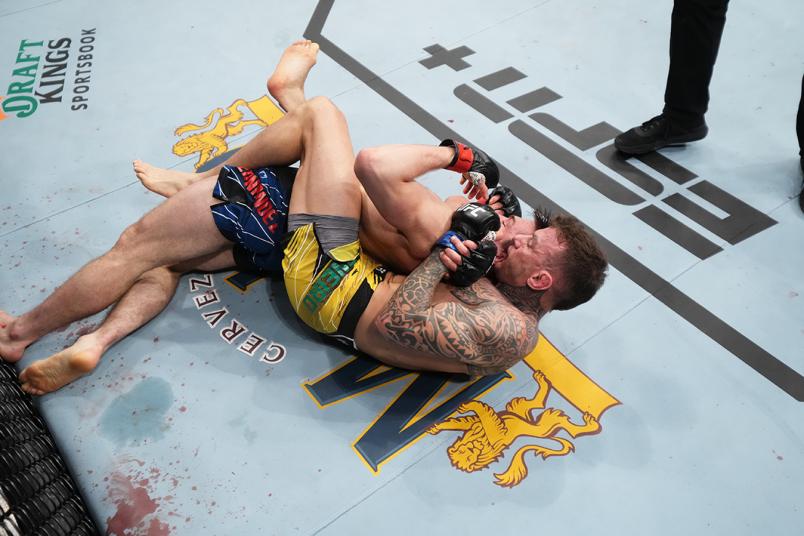 Dos Anjos returned to lightweight following an eight-fight run at welterweight with designs on working his way back to the title, while Moicano moved up a division in order to do the same after a solid run as a Top 10 featherweight.

A week after Makhachev and Arman Tsarukyan earned dominant finishes, the outcome of Saturday’s pairing between the sixth-ranked Dos Anjos and the hungry Moicano will determine which of them will head towards the summer on the fringes of title contention, staring down a potential date with another Top 10 opponent, and which of them will be forced to re-evaluate where they stand in the division.

This is an ultra-competitive matchup between two proven, talented professionals and it should serve as a perfect appetizer to Saturday night’s main event.