"I’m really happy with the opportunity the UFC gave me to fight in a main event. I have 15 fights in the UFC, so I think it’s the perfect time." - Rafael Dos Anjos 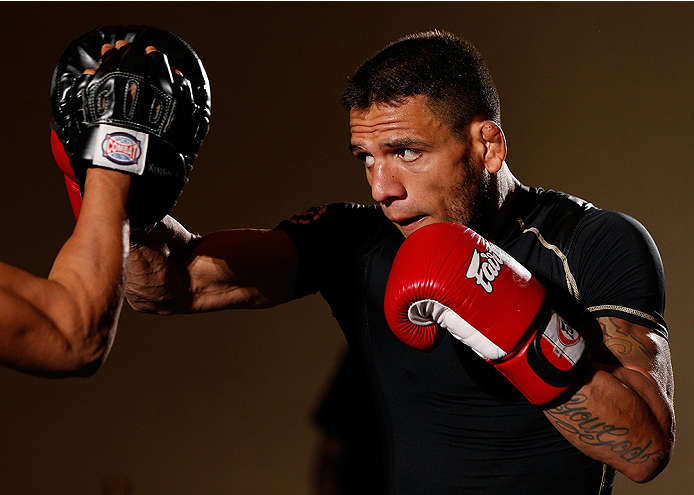 It took a while – 15 fights and nearly six years to be exact – but Rafael Dos Anjos will finally headline a UFC event on Saturday in Tulsa against former lightweight champion Benson Henderson.

It wasn’t always that way for the 29-year-old Rio de Janeiro native. In fact, it’s only been recently that he’s learned the value of being patient and keeping your eyes on what’s in front of you. He can thank Khabib Nurmagomedov, who snapped his five-fight winning streak in April, for that.

“You can’t think too much about the belt,” Dos Anjos said. “The belt will come naturally. So my focus right now is to keep fighting, to keep good health with no injuries, and to keep doing my job, which I love. I’m going to try and fight as much as I can, and I think the opportunity for the belt will come naturally. I learned a lot in that fight (with Nurmagomedov) because I was too worried about losing the fight. I had five wins in a row and I was thinking if I lose, I go to the back of the line.”

He didn’t have to thanks to a June TKO of Jason High that put him back in the win column. The headliner on that show in Albuquerque – Henderson – also won, submitting Rustam Khabilov. The next step for both fighters? Each other.

“He’s a tough guy, he’s got amazing cardio and amazing skills, and I’m very happy that he accepted to fight me and I’m really happy with that opportunity,” Dos Anjos said of Henderson, who has vowed to clean out the division if he has to in order to get a shot at regaining his world title. Dos Anjos has simpler goals at the moment.

It’s an understated confidence that comes with experience – both good and bad – over the course of a long career. And though Dos Anjos was always on the fringe of the title picture, his winning streak and a move to southern California lifted him from the pack and into the elite fraternity at 155 pounds.

“It changed a lot,” he said of the effect moving to the U.S. has had on him. “I’ve been living here for two and a half years and everything changed in my life. I’ve been training harder, and I’ve been focused on my career more, because once you’re here, I don’t think about anything else. I just worry about my training, what I’m eating, what I’m doing to rest, so that’s why I think I’ve been improving a lot.”

The biggest improvement as of late has been in Dos Anjos’ stand-up game, which was on full display in the win over High.

“I trained jiu-jitsu for a long time, it’s my background, and my weakness is my stand-up game,” said the BJJ black belt. “So I’ve been training a lot of Muay Thai and boxing with Master Rafael Cordeiro at Kings MMA, which is my main gym right now. I’m training with him three times a week, and right now it’s the training I enjoy more. So I love doing mitt work and a lot of combinations, and I think that’s why I’ve improved more. I like to do it.”

And who knows, maybe the wait to get to a main event was perfect timing for Dos Anjos. He believes it is.

“I think right now is the right time, and I’m really happy with the opportunity the UFC gave me to fight in a main event,” he said. “I have 15 fights in the UFC, so I think it’s the perfect time.”
> Watch: Fight Night Tulsa Watchlist