Few competitors have fought a tougher slate over the course of their career than Rafael Dos Anjos.

The 37-year-old has stepped into the Octagon 30 times across two divisions, amassing a 19-11 record that includes a lightweight title victory, one successful title defense, and an interim welterweight title fight appearance. He’s shared the cage with eight men that have held UFC gold during their careers and has spent the last decade facing ranked opponents in both the 155-pound and 170-pound weight classes.

He has been the hunter and the hunted, as well as “the guy you have to beat to prove you belong in the title conversation” in two different divisions, and after the longest absence of his career, Dos Anjos is champing at the bit to finally step into the Octagon again this weekend.

Initially slated to face emerging threat Rafael Fiziev in the main event of the UFC Fight Night event on February 19, the bout was pushed back to this weekend’s pay-per-view card when Fiziev’s visa was delayed. At the outset of the week, it was announced that Fiziev had tested positive for COVID-19 and was forced out of the postponed pairing, opening the door for Moicano to step up in his stead and fight on consecutive pay-per-view events after submitting Alexander Hernandez last month at UFC 271 in Houston.

“You look at my record and you see if I’m the type of guy that picks my fights,” he said. “I love challenges. I just want to be there.”

It’s been 16 months since Dos Anjos has been inside the Octagon, but despite not competing, he still had an eventful 2021.

Ahead of what was supposed to be a date with Islam Makhachev in November 2020, Dos Anjos opted to prepare in Rio de Janeiro, venturing home to work with Andre Pederneiras and the team at Nova Uniao. The camp went exceptionally well, and the former lightweight titleholder delivered a strong performance in a five-round victory over Paul Felder, who stepped in on short notice when Makhachev was forced out of the contest.

Soon after, he broached the idea of moving to Rio for a couple years with his wife, and when he got her sign-off, the family packed their things and headed to Brazil.

“It’s been good,” Dos Anjos said of the return home. “It wasn’t a good year because I couldn’t compete, but I fixed my body. I got scheduled to fight Islam, but I hurt my meniscus and had to have it removed. I have great doctors and therapists here and I’m 100 percent now.

“I was putting together my own team — I was being my own general — and I felt that I needed somebody else to worry about that for me,” continued the Brazilian veteran, who had been running his own camps and working with striking coach Jason Parillo in Huntingon Beach, Californina for the last several years prior to moving back to Brazil. “I’m giving my best to training and I don’t want to worry about anything else.

“Being in Rio, I said, ‘Hey, I want to try doing a camp with Andre Pederneiras at Nova Uniao,’ and Andre is a great guy; he takes care of everything. I don’t have to worry about anything. He gets really good feedback from all the coaches, all the doctors, and he handles everything.

“Like I told my wife, ‘I don’t want 10 years from now to regret that we didn’t move to Brazil,’” he added. “We took the risk, it’s been a good move, and I really love working with Andre. We’ve got a lot of bodies here at Nova Uniao — guys that are hungry and want to help. It’s been really good.”

Training in Brazil with Pederneiras and the Nova Uniao crew also strengthened his resolve when it came to making the shift back to lightweight, something he hadn’t done in four years prior to his bout with Felder.

After losing the lightweight title to Eddie Alvarez in the summer of 2016, Dos Anjos faced Tony Ferguson in an entertaining clash in Mexico City four months later, landing on the wrong side of the results in the Fight of the Night-winning bout. Making the 155-pound limit had long been a challenge for the thickly built Brazilian, so he opted to venture up to welterweight, where he instantly became a player in the title picture.

He won his first three fights against fighters stationed increasingly higher up in the rankings, beating Tarec Saffiedine, Neil Magny, and Robbie Lawler to land a chance to fight for the interim title opposite Colby Covington. That loss was followed by a similar defeat to Kamaru Usman, with setbacks to Leon Edwards and Michael Chiesa coming after a quality stoppage victory over Kevin Lee.

The promise of his three-fight winning streak to begin his welterweight venture shifted to a tough run of results against elite competition, prompting him to consider his options.

“(The Michael Chiesa) fight is one that I asked for, but it was a very terrible weight cut for me,” said Dos Anjos. “I never get tired in fights, but that fight, I was so tired after the first round, and I really felt that I needed to make some adjustments, some changes in my career.

“I spoke to Jose Aldo and he told me that he had a hard time to cut to 145, ‘but now I make 135 pretty easy.’ He put me in touch with his doctor in Brazil, I flew out from California to Rio to meet with the doctor, and we had a good talk, a good meeting. 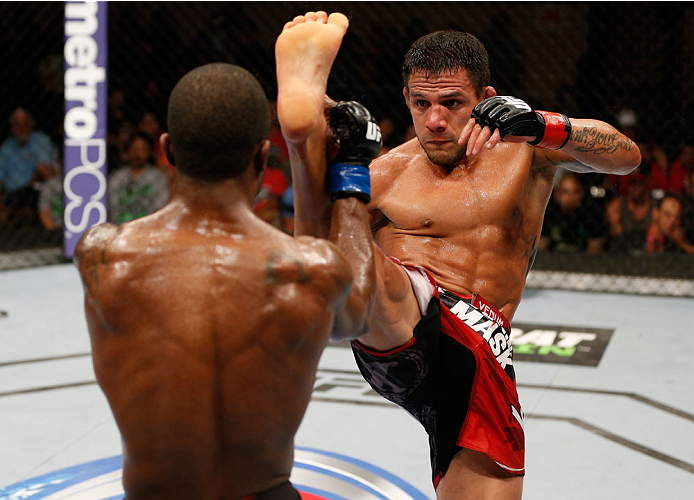 “I’ve changed my lifestyle completely,” he said, laughing. “Usually I walked around at 190, 192 pounds, but my walk-around weight now is 182, 183. I changed my lifestyle and the cut for Paul Felder was not hard at all; it was way easier than the fight with Chiesa. My last cut for the fight I was a back-up fighter for — (Dustin) Poirier and Conor (McGregor, at UFC 264) — was pretty easy too.”

With the challenges of 2021 behind him and feeling as healthy as he has in years, Dos Anjos understands many view him in that “gatekeeper to title contention” role his scuttled fights with Makhachev and Fiziev cast him in, but he’s not ready to be pushed out of the title conversation yet just.

“I’ve invested in my career, I know I still have one last title run in me,” he continued. “I was looking for something different (this fight). We were looking for (Michael) Chandler, Tony Ferguson, but I don’t think these guys want to fight — they want to play chess matches, and I’m not in that position right now.”

Not that he’s ever been one to sit around and wait for the perfect matchup.

After all, he agreed to fight Makhachev three different times when the surging contender was working his way up the divisional ladder, signed on to face Fiziev when no one was rushing to stand across from him, and has spent his entire career facing an absolute Murderers Row of competition.

And now, after more than a year away and yet another opponent change, Dos Anjos is finally set to return to action.

“I’m thankful to be healthy and I want to be active this year,” he said. “Everything feels like new, even though I have a lot of experience. I feel like a beginner. I just want to be there.”