Rafael dos Anjos: A Contender Six Years in the Making 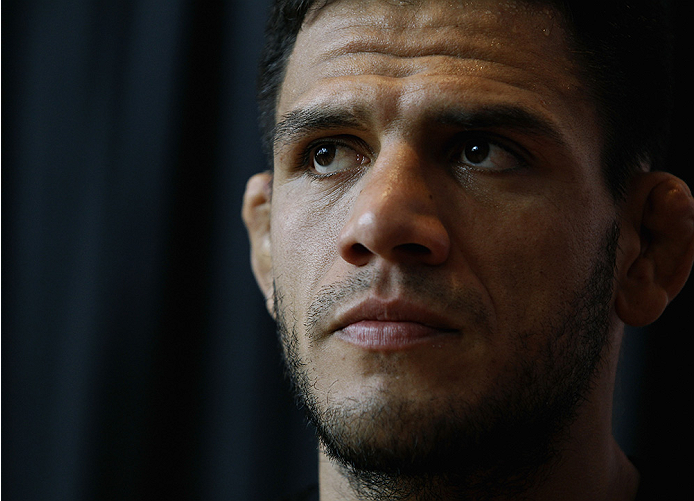 “I’m really looking forward to winning my fight and asking for a title shot. That’s what I want.”

Rafael dos Anjos’ voice doesn’t waver as he speaks of handing Nate Diaz a loss in his return to action and using his post-fight interview time with Joe Rogan to request a shot at the UFC lightweight title.

Now 30 years old, the Brazilian is at the highest point of his career. In late August, he knocked out former champion Benson Henderson with a single shot just one tick beyond the midway point of the opening round to pick up his second consecutive stoppage due to strikes. Over his last eight appearances, the Rio de Janeiro native is an impressive 7-1, his lone loss coming against unbeaten contender Khabib Nurmagomedov.

In addition to stopping Henderson, dos Anjos picked up decision wins over veterans Mark Bocek and Evan Dunham and shut down Donald Cerrone, who has morphed into a legitimate title challenger since getting thoroughly controlled in Indianapolis in August of 2013. Through his impressive run, dos Anjos has climbed to No. 3 in the lightweight rankings, a position he seemed unlikely to reach after his first two trips into the Octagon.

There are only two fighters currently ranked in the Top 3 in their respective divisions that lost their UFC debuts – dos Anjos and Miesha Tate. While the perennial women’s bantamweight title threat lost a back-and-forth battle to determine the No. 1 contender to undefeated standout Cat Zingano, dos Anjos’ defeat came all the way back at UFC 91 in a preliminary card fight against a young slugger named Jeremy Stephens.

Five months after getting dropped by an uppercut straight out of Street Fighter II (Shoryuken!), Tyson Griffin handed dos Anjos his second consecutive loss under the UFC banner. Just 24 years old at the time, getting a victory seemed like a major challenge, while climbing to the top of the division appeared out of the question.

“I didn’t have so many opportunities in my life,” dos Anjos begins. “I come from a poor childhood. I didn’t have much time to play soccer, so I’m not good at soccer at all, so the only opportunity I had in my life was fights. I love Brazilian Jiu-Jitsu, got my black belt when I was 21 years old and then I found UFC.

“I got in the biggest organization in the world and then I lost my first two fights – I really was disappointed, but I always believe that I can become a champ and be one of the top contenders. This has been motivation for me a lot, along with my family, who has supported me a lot.”

Things would begin to turn around for dos Anjos soon after.

He picked up his first victory in his third appearance, brought his record to .500 with a decision win over Kyle Bradley and then garnered recognition as a potential prospect with a second-round armbar win over Terry Etim at UFC 112 that earned him Submission of the Night honors.

A loss to Clay Guida followed four months later and the broken jaw he suffered in the bout put dos Anjos on the sidelines for nearly a year, but when he returned, the southpaw showed that he was still someone to keep tabs on in the 155-pound ranks, sleeping George Sotiropoulos with a blistering right hook one minute into the opening round of their encounter at UFC 132.

Four months later, a narrow split decision loss to veteran Gleison Tibau proved to be the turning point in not only dos Anjos’ career, but his life as whole.

“I think since I moved to California three years ago, I started to take things serious,” the now 22-7 top contender admits. “I came here once before I moved – I stayed here two weeks, training at Black House and when I went back home, I had a conversation with my wife and said we have to choose.

“It’s not easy to move, especially with kids. If I want to be a world champion, the best in my weight division, I needed to go, I needed to train with the best, and have better sparring. At that time in Brazil, I was living five minutes away from my gym and I had a really comfortable life, so I had a really hard decision, but like I said, the hard work has paid off since I moved here.”

Now training under the watchful eye of Master Rafael Cordeiro at Kings MMA, dos Anjos has blossomed into one of the most dangerous fighters in the lightweight division, adding fluid striking and improved conditioning to his already threatening submission game.

Coming off his breakthrough knockout win over Henderson, no one would have faulted dos Anjos for resting on his recent results and allowing things at the top of the division to play out. Instead, the surging contender chose to accept a co-main event assignment against Diaz in hopes of securing himself a title shot in the first half of 2015.

“He’s before me, but he’s out,” dos Anjos continues in regards to Nurmagomedov, who bested him back in April. “He has an injury, so I think after I beat Nate Diaz, I deserve a title shot. I’ve been in the UFC for six years and I have 17 fights – I changed my whole life because of UFC, because of my fights, because I trust my talents.

“Every day, I feel that I’m getting better. I just turned 30 years old, so I still have six or seven more years of my career. Since I got in the UFC six years ago, I’ve grown a lot, but I still have a lot to learn, a lot to grow as a fighter. My goal is to get better every fight. I want to be the best and I think I will still improve. You guys haven’t seen the best Rafael yet. I still have a lot of things to get better at and I think after this fight, I deserve a title shot.”