RDA Plans To Send Kevin Lee Back To Lightweight

RDA Believes That The "Mo Town Phenom" Won't Be Able To Hang With Him In The Main Event Of UFC Rochester
By Damon Martin • May. 17, 2019

As a veteran with nearly 40 fights on his record, Rafael Dos Anjos knows all about the highs and the lows that come along with a mixed martial arts career spent at the top of the sport.

He’s experienced life changing moments like when he became the lightweight champion back in 2015 and he’s also felt the doldrums of back-to-back defeats that he’s dealt with in his past two performances.

While no fighter wants to suffer one loss, much less two in a row, the 34-year old Brazilian is smart enough to rationalize what went wrong in each of those fights so he can make the tweaks and changes necessary to prevent it from happening again. It’s part of the reason why Dos Anjos is so confident heading into this weekend as he prepares for a showdown against Kevin Lee in the main event of UFC Fight Night in Rochester, New York.

“It just wasn’t my time,” Dos Anjos said ahead of his return to action on Saturday night. “I’ve had five fights at welterweight with the two losses, but I lost to the current champion [Kamaru Usman] and to the interim champion [Colby Covington].

“Nobody else was able to beat me in this division but the champion and the interim champion. I did my best with those fights.”

Dos Anjos knows exactly what went wrong against Covington at UFC 225, but when it comes to his fight versus Usman this past November, there is absolutely no excuse for what went wrong. He just pays homage to Usman as the better man that night, with hopes that they will cross paths again one day in the future.

“I had a couple issues during the Colby [Covington] camp, but with [Kamaru] Usman, everything went perfect,” Dos Anjos stated. “Credit to him, he was able to beat me fair and square. With Colby I had some ear problems. At the end of the day, it doesn’t matter how much you train. I learned that with all these years competing. Sometimes you do everything right and you still lose the fight. You do everything wrong and still win the fight.

“It’s just a matter of it being your day and being in a good spirit. I believe that’s the guy upstairs looking after us. He decides who’s going to win and who’s going to take the loss home and I took the loss home the last two times but I’m confident I’m going to get the win this time.” 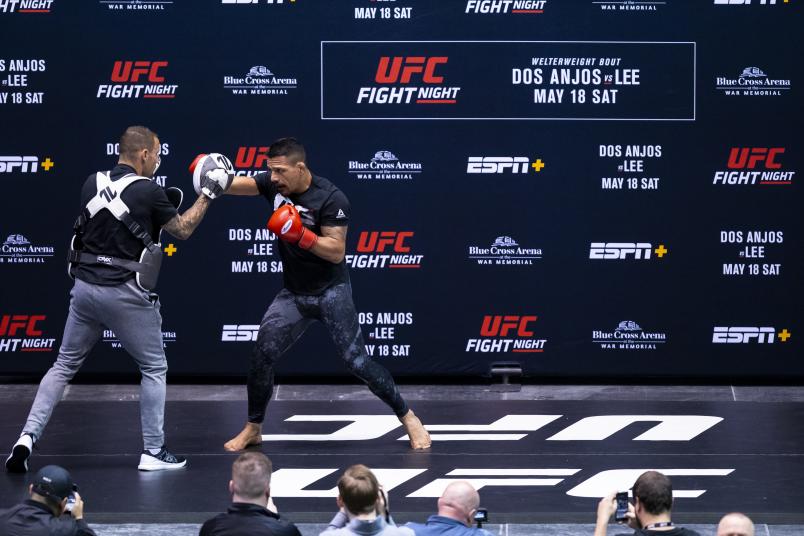 That kind of perspective has helped Dos Anjos to put those past defeats out of his mind as he prepares for his fight against Lee.

If there’s any correlation between those two losses and his upcoming fight, it’s that the former champion is once again facing a physically imposing wrestler with a high-level grappling game.

Admittedly, Dos Anjos hadn’t pegged Lee as a potential opponent because “The Motown Phenom” had only competed at lightweight during his UFC career, but he was more than happy to accept the challenge.

“We tried a couple of other options and it didn’t work out,” dos Anjos explained. “(Matchmaker) Sean [Shelby] told us that Nick Diaz would be interested in fighting me but it didn’t come to terms; it didn’t happen. Then I asked to fight [Jorge] Masvidal but Masvidal is fighting Ben Askren. Then all of a sudden they come with Kevin Lee. A lot of guys are coming up in the division like Anthony Pettis came up and knocked out Stephen Thompson. This opportunity came up and it makes sense. 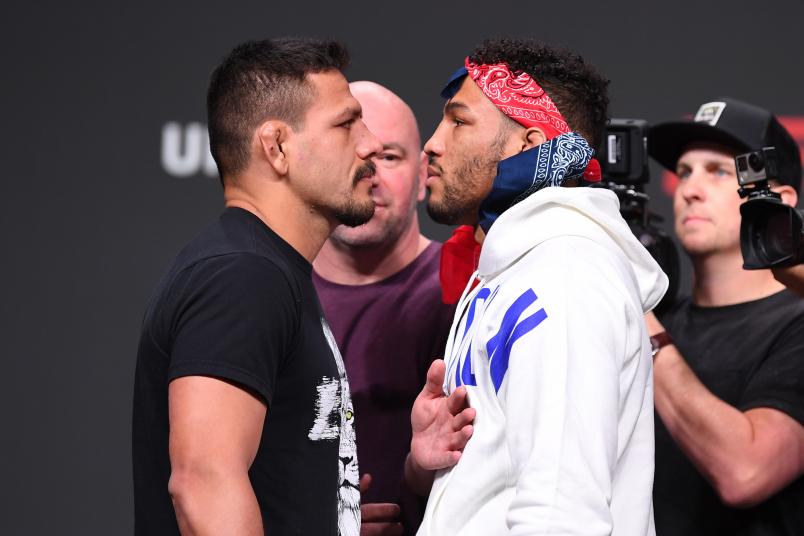 “I know he’s not going to have the size advantage on me because he’s a former lightweight and I’m a former lightweight. I feel like those big wrestlers like Usman and Colby, they had a big advantage on me with the size. They were able to hold me against the cage and eat a little bit of time there. I feel like Kevin Lee in a five-round fight, he’s not going to be able to do that with me.”

Much like Dos Anjos when he left the lightweight division behind, Lee has often talked about his struggles to keep his weight down in order to compete at 155 pounds.

Now that will no longer be a hindrance as Lee will bulk up to fight at welterweight instead, but Dos Anjos knows that the adjustment to compete in a new weight class still takes some time.

After five fights in the division, Dos Anjos truly feels like he belongs at welterweight, but he can’t say for certain that Lee will find the same kind of success.

“I did what I had to do at lightweight but now welterweight is my division,” Dos Anjos said. “He (Lee) is dangerous. Good jiu-jitsu, a very good, well-rounded fighter. I’m pretty confident for this one. He beat some good guys but he didn’t become a champion. That’s why he’s moving divisions.

As confident as he may be going into the weekend, Dos Anjos isn’t looking past Lee as he attempts to climb back into title contention in the near future.

With another main event slot ahead of him, Dos Anjos always wants to put on a show to prove why the UFC has such faith in him to give him these high-profile opportunities.

“I know there is no easy fight out there. Kevin Lee is a stud,” Dos Anjos said. “He’s very athletic and explosive but I think if this fight goes the distance, I have more of an advantage. I’m going to be able to keep pushing my pace. It’s a big fight. It’s a good fight for me, too, to put me back on track. I’m just happy with that opportunity.

“One more main event and I’ve been fighting a lot of main events. I’m ready. I can’t wait to get it done.”