Rafa Garcia Aims To Redeem Himself

Trevor Wittman famously told Justin Gaethje that if he wanted to stop Tony Ferguson in their highly anticipated encounter at UFC 249, he needed to take 10-20 percent off his shots and just let the finish come to him.

His charge was out there swinging for the fences, trying to make every punch the one that put “El Cucuy” on the canvas, but Wittman knew it wasn’t going to be a single blow that would finally fell Ferguson; it would be the totality of all of the shots Gaethje landed. The “walking performance bonus” listened to his coach, dialed things back a touch, and late in the fifth round, the fight was stopped; Gaethje got his finish and Wittman once again showed he’s one of the sharpest coaches in the game.

Over the last several weeks, he’s been trying to impart a similar type of understanding on Rafa Garcia ahead of his fight with Chinese sophomore Maheshate.

“Trevor is always telling me, ‘You’ve got to break your opponent little-by-little — they won’t break with the first punch at this level,’” said Garcia, who looks to rebound from a short-notice loss to Drakkar Klose in July when he returns to action this weekend opposite the Dana White’s Contender Series grad. “You’ve got to go out there and figure them out, break them down, little-by-little — smaller shots, big shots — and the finish will come.”

As simplistic and common sense as it sounds, the truth is that it’s the kind of idea that needs to be repeated routinely throughout an athlete’s career, as forgetting or ignoring that basic tenant is easier than one might think.

A couple big knockouts get you believing in your power a little too much and leave you hunting for big, overhand bombs. 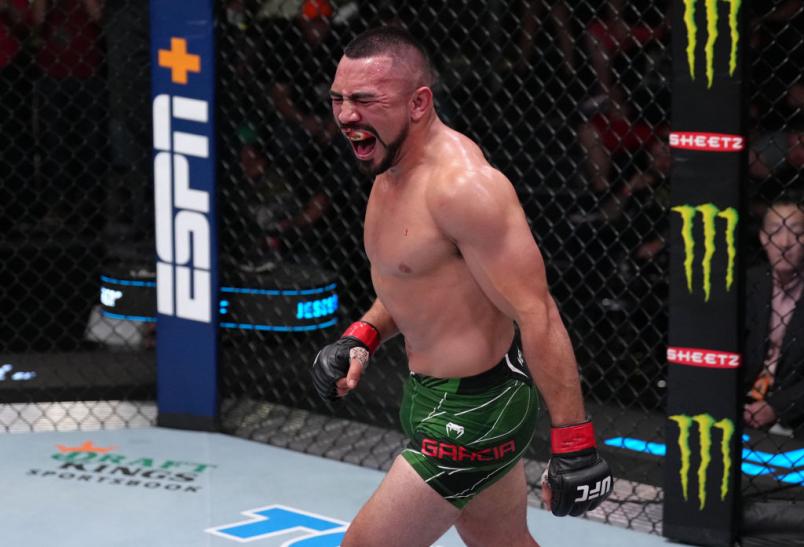 Rafa Garcia of Mexico reacts after defeating Jesse Ronson of Canada in a lightweight fight during the UFC Fight Night event at UFC APEX on April 16, 2022 in Las Vegas, Nevada. (Photo by Jeff Bottari/Zuffa LLC)

Matchups against an overmatched opponent or two that looks for an exit at the first sign of trouble gets you thinking your next dance partner will do the same.

It sounds far-fetched, but when you’re an emerging talent blowing through the competition without suffering any setbacks, those little reminders can help you start to get things back on track when they inevitably go off course.

“Everybody is tough when you get to this level; you can’t just go out there and try to rip somebody’s head off because it ain’t going to work,” Garcia said when asked the greatest lesson he’s learned through his first six trips into the Octagon. “Everybody is at this level because they’ve been through wars, they’ve been tested, they don’t get scared by the first hard shot that lands.

Garcia began his career with a dozen consecutive victories, with his last three wins prior to touching down on the biggest stage in the sport coming against fighters that had either previously competed in the UFC or would eventually join him on the company’s roster.

He earned finishes in the majority of those contests, but when he graduated to competing in the Octagon, he stumbled out of the gate. He suffered the first two losses of his professional career in back-to-back outings four months apart, dropping decisions to Nasrat Haqparast and Chris Gruetzemacher before righting the ship with a win over Natan Levy towards the end of 2021.

An impressive second-round submission win over Jesse Ronson followed in April, but then Garcia agreed to replace Diego Ferreira on short notice and ran headlong into a more experienced, savvier opponent in Klose at UFC 277.

“The thing I got from the Drakkar fight is that I was being too safe,” he said, reflecting on the contest and result. “I was trying to secure the win. I should always go out there and try to finish the guy — not recklessly, but little-by-little, get my shots in. I feel like I was walking back too much and didn’t do a lot of stuff that I should have done.”

RELATED: Best Of Drew Dober | Fighters On The Rise | Strickland Puts In The Work

Despite being less than two years into his own UFC run, Garcia looks at this weekend’s contest with a bit of a “Senior vs. Sophomore” vibe, as he’ll be making his sixth appearance under the bright lights, while his 23-year-old foe will only be making the walk for the second time.

When asked if he intends to use that experience edge to his advantage on Saturday, the 28-year-old said, “It’s mostly just making it my game plan. 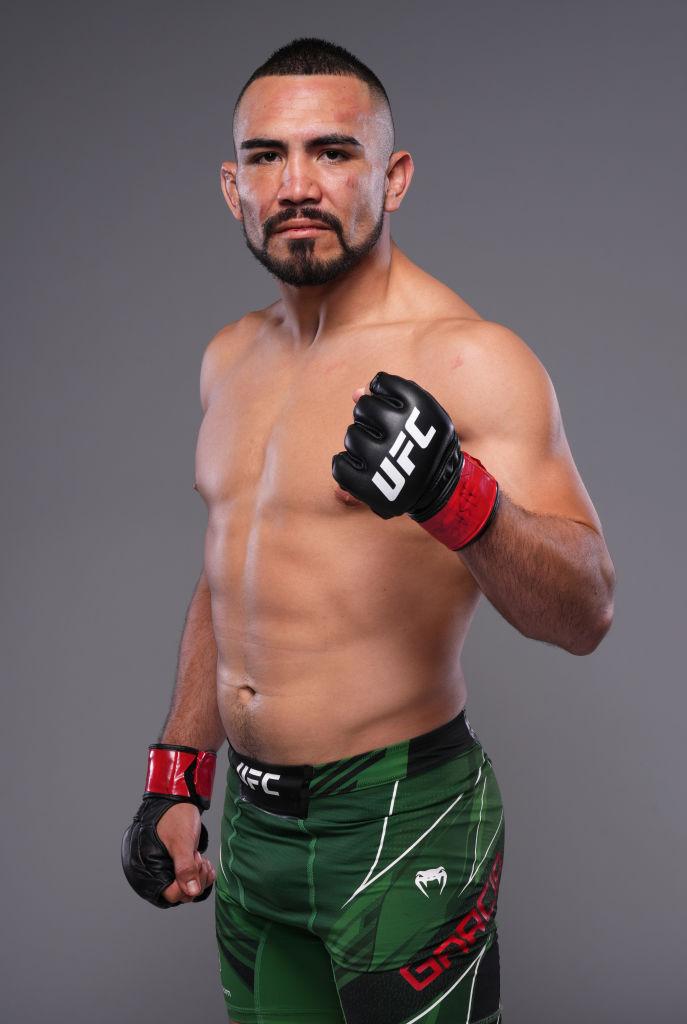 Rafa Garcia of Mexico poses for a portrait after his victory during the UFC Fight Night event at UFC APEX on April 16, 2022 in Las Vegas, Nevada. (Photo by Mike Roach/Zuffa LLC)

“The mistake I made with Drakkar was letting him walk me back and letting him take a step into my bubble,” continued Garcia, who trains regularly with the aforementioned Gaethje while doing his camps in Denver. “With Maheshate, I’m not going to let him do that: it’s going to be my fight, my game plan, and I’m going to be walking forward, be in his bubble, his face. I’m going to go out there and try to drown him and get the finish.”

Don’t expect him to go recklessly in search of that stoppage, though, as that would contradict Wittman’s core teachings and deviate from the piece-by-piece approach he’s been trying to drill into Garcia and the select athletes he works with each time they’re in the gym.

But that doesn’t mean the Baja California resident doesn’t want to deliver a pedestrian performance and claim an unexciting victory on Saturday night either.

“It will mean a lot to finish out the year with another win,” suggested Garcia. “I gotta go out there and do a great job, especially coming off a loss. I want to redeem myself, show people what I’m capable of doing by not only winning, but winning in a spectacular fashion.”